As the indexes closed at various points within their intraday ranges Monday, the end result was all remain in near-term uptrends while cumulative market breadth remains neutral.

However, there were some notable shifts in sentiment (contrarian indicators) resulting in less encouraging data as the level of bearish investor expectations cooled to the point that it now is expected to have less of a positive influence on the markets. Also, the S&P 500's valuation has become more stretched.

So, while we remain generally constructive in our outlook, sentiment and valuation suggest some degree of tempering of enthusiasm on our part. Not chasing price and buying weakness near support becomes even more important, in our view.

On the charts, the major equity indexes closed mostly lower with only the Dow Jones Transports posting a gain as internals were negative on the NYSE and Nasdaq.

However, the losses had no impact on the current trend structures that remain near-term bullish on all with all still above their 50-day moving averages. No violations of support or trend occurred.

Market breadth remains neutral for the All Exchange, NYSE and Nasdaq cumulative advance/decline line while no stochastic signals were generated.

The detrended Rydex Ratio, (contrarian indicator) rose further to -0.97 and is now only mildly bullish versus its prior bullish implications. The significant amount of short-covering on the part of the leveraged ETF traders in the recent rally suggests it now may have less of a positive influence on the markets.

The same can be said for the AAII Bear/Bull Ratio (contrarian indicator) as its new reading slipped to 1.35 and is now bullish versus its very bullish signal of late. 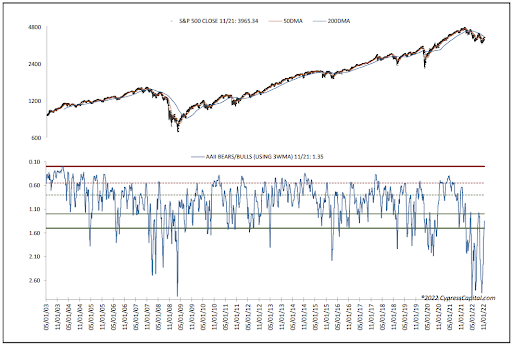 While the charts remain healthy with uptrends that should be respected until proven otherwise, the less bullish implications from the sentiment data combined with valuation suggest buying weakness near support versus chasing price has become more necessary.