As we start a new trading week, what are the charts and data telling us?

The data remain mixed, but the market psychology numbers remain at historically high levels of fear while the charts, market breadth and valuation have managed to improve nicely over the past several sessions.

Thus, we believe that selective buying is appropriate, especially for those with medium to longer-time horizons. 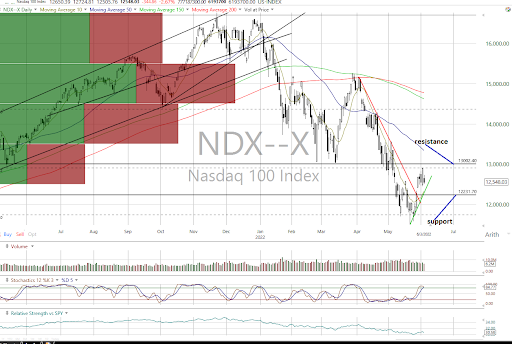 All the major equity indexes closed lower Friday with negative internals on lighter volume. While most closed near ether intraday lows, no violations of support were registered.

However, the S&P 500 did close below its near-term uptrend line, shifting its trend to neutral from bullish. The rest of the charts are neutral as well except for the Nasdaq 100 (see above), which is near-term bullish, in our opinion.

The sessions weakness had no impact on the cumulative advance/decline lines for the All Exchange, NYSE and Nasdaq that remain positive.

Stochastic levels continue to be overbought but no bearish crossovers have been triggered thus far.

The Open Insider Buy/Sell Ratio declined to 52.7 from 70.7, but also stayed neutral.

However, the detrended Rydex Ratio (contrarian indicator) remains very bullish at -4.16 as the ETF traders are extremely leveraged short at a level seen only once in the past decade at the beginning of 2019. From that point the market rallied until March of 2020 when Covid arrived on the scene. As such, the Rydex/Insider dynamic remains very encouraging.

The Investors Intelligence Bear/Bull Ratio (contrary indicator) also remained on a very bullish signal and near a decade peak of fear at 40.8/228.28. Only twice in the past decade has bearish sentiment been this extreme, both of which were coincident with market bottoms.

In our view, the sentiment numbers are quite encouraging.

The improvement over the past several sessions in market breadth, index chart trends, compression of valuation and extreme levels of fear suggest to us that selective buying is appropriate.