The market bounce we expected finally appeared Thursday and there are some reasons to be encouraged. However, was it enough to "tip the scales"?

While the gains were notable, only one major index managed to improve its near-term trend. And while breadth was strong, the cumulative advance/decline clines remained negative.

Still, there is some further encouragement coming from the data dashboard. Insiders displayed a notable increase in their buying activity while the leveraged ETF traders, who are notoriously on the wrong side of the action, intensified their leveraged short exposure. This dynamic typically finds the insiders on the right side of the trade.

Let's weigh all the evidence.

What Happening on the Charts? 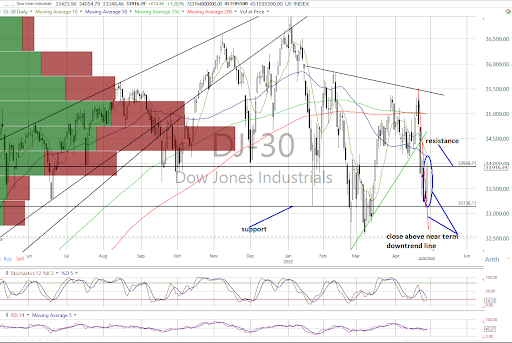 The major equity indexes closed higher Thursday with sizable gains on positive internals for the NYSE and Nasdaq.

All closed at or near their intraday highs with the DJIA (see above) being the only index to close above its near-term downtrend line, joining the Dow Jones Transports, which closed above resistance in neutral trends.

The rest of the indexes remain in near-term negative projections despite the sizable bounce.

The cumulative advance/decline lines for the All Exchange, NYSE and Nasdaq remain negative and below their 50-day moving averages.

Stochastic levels remain oversold and lacking bullish crossover signals on all but the Dow Tranports.

The percentage of S&P issues trading above their 50-day moving averages (contrarian indicator) at 41% remains neutral.

We would note the Open Insider Buy/Sell Ratio rose to 72.4%. While staying neutral, it shows an increase in buying appetite on their part.

On the other side, the detrended Rydex Ratio (contrarian indicator) finds the leveraged ETF traders increasing short exposer to -1.39. Thus, the current state of the insider/Rydex relationship adds some weight to the positive side of the scales.

The detrended Rydex Ratio is -1.39 (bullish) 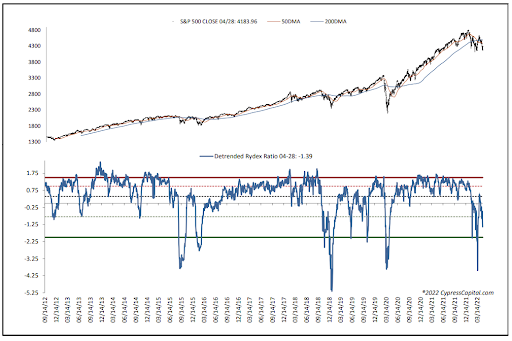 Meanwhile, this week's AAII Bear/Bull Ratio (contrarian indicator) rose to a very bullish 2.25. It has seen these levels six times in the past 20 years with all but one resolving into a rally. The only outlier was the 2008-2009 financial crisis.

Also, the Investors Intelligence Bear/Bull Ratio (contrary indicator) was 33.3/32.1 as bears outnumbered bulls. Historically, these levels have been buying opportunities for those with longer-term horizons.

Thursday's action was encouraging. However, chart and breadth need further improvements. It was just not quite enough for us to declare the market correction is complete. Close but no cigar yet.

Get an email alert each time I write an article for Real Money. Click the "+Follow" next to my byline to this article.
TAGS: Indexes | Investing | Markets | Technical Analysis | Treasury Bonds | U.S. Equity