By STEPHEN GUILFOYLE Jan 13, 2022 | 07:47 AM EST
Stocks quotes in this article: WFC, DAL, TSM, AAPL, TXN, DIS, AMZN, XLB, FCX, NUE, XLV
So many times it happens so fast
You change your passion for glory
Don't lose your grip on the dreams of the past
You must fight just to keep them alive
--"Eye of the Tiger" Peterik, Sullivan (Survivor) 1982

According to Billboard magazine, "Physical" by Olivia Newton John was the top song for 1982. Survivor's "Eye of the Tiger" finished in second place. I always kind of liked this song, and I wasn't about to quote "Physical" for you this morning. You can thank me later. 1982. So long ago. It must be. The calendar tells me so. Seems like yesterday.
What do I think of when I think of 1982? I think of a Nicaraguan kid whose name I will never remember who loved his country, and was sure that we could help him win it back. Shared a foxhole with that kid one rainy North Carolina night. All of the sudden more tiny frogs than I could count started jumping all over us. This kid started eating them like candy. To his credit, he was willing to share. No thanks, dude.
I think of slugger Dave Kingman of my beloved New York Mets leading the National League in home runs with 37, despite hitting just .204 with a .285 on base percentage. Sky King. I certainly don't think of inflation, though I was quite aware of how much it hurt my family over the previous decade.
On Wednesday morning, the Bureau of Labor Statistics released December's CPI (Consumer Price Index), and the data, though not unexpected, left a mark. A headline print of 7.0%, the highest pace of annual growth for the series since June 1982, and a core print of 5.5% served to shock at least the non-financial media, or at least it was something that they felt they could sensationalize for the unwashed. Optimists pointed toward the 0.5% month-over-month headline growth as a moderation off what had been the torrid pace of October and November. Pessimists took stock of the 0.6% core month-over-month number that actually topped expectations and matched the fastest pace of sequential inflation experienced at any point in the past six months.
In short, inflation is broadening beyond food and energy. Food inflation actually cooled in December, as energy prices contracted outright. Gasoline, though up 49.6% y/y, printed at -0.5% month over month. Where was the inflation in December? Try used cars, up 3.5% for the month and 37.3% annually. Try Apparel, up 1.7% for the month after rising 1.3% the month prior after a long string of benign prints leading up to November. Try commodities, and try new cars, up 1.2% and 1% for the month, respectively.
The real kick in the pants comes when one considers real wages. Last Friday, the BLS also told us that wages for Americans are up 4.7% year over year. Not so hot in an inflationary environment of 7%. Not so hot at all. Folks were closer to sustaining, on their own, their household's standard of living when neither wages nor inflation were moving much at all.

Financial markets took the news in stride. Treasury securities barely moved at all. Stocks opened higher, and created sort of a "fun" environment, but as had also been the case on Tuesday, trading volume remained less impressive than it had been when the "ugly stick" had been out and about last week.
I don't think most of us trusted the move higher in the morning on Wednesday. I know I didn't. Just as equity markets had opened lower on both Monday and Tuesday, and then reversed... on Wednesday, equities did just the opposite, but unfortunately... still reversed. Most of your major equity indexes stayed close to home for the day. The S&P 500, and the Nasdaq siblings (Composite & 100) finished the day with gains of between a quarter and three eighths of one percent. Small-caps, Mid-caps, and the Dow Transports all closed lower. For the Dow Transports, Wednesday was the fourth day in a still "in progress" losing streak.
Breadth for the session was quite unimpressive, but you might not know that by just looking at sector performance. Sure, 10 of the 11 S&P sector-select SPDR ETFs closed in the green, led by Materials ( ( XLB) ), which were in turn led by Freeport-McMoRan ( FCX) and Nucor ( NUE) , up 5% and 3.5%, respectively, but the rest of the daily performance table showed only moderate gains with Health Care ( ( XLV) ) closing in the red.
Winners beat losers at the NYSE by less than 100 names, and losers beat winners at the Nasdaq by a rough 11 to 8. Advancing volume took 60% of the aggregate for NYSE listed names, but only 45.7% of the aggregate for those names domiciled at the Nasdaq market site.

Why The Mundane Reaction?

Especially for Treasuries? Speaking of Treasury securities, the Department raffled off $36B worth of 10-year paper (it's not paper anymore) on Wednesday. I wouldn't call the auction weak. Bid to Cover of 2.5 landed right in line with recent norms. The high yield of 1.723% tailed the 1.72% "when issued" at the time but not frighteningly so. Indirect bidders (foreign accounts) took down 65.5% of the issuance, which is historically fine, but off of recent averages of roughly 70%. Dealers were stuck with 16.6% of the whole enchilada as Direct bidders took 17.9% of this issue, which is right around their recent average. Treasury will sell $22B worth of 30-year bonds this afternoon.
OK, my mind strayed into the world of sovereign borrowing... back to our core thought. Why the mundane reaction across financial markets? Off the top of my head, markets either believe (for the moment) that core inflation has peaked/is peaking or that tighter monetary policy is already somewhat priced in. I know that would be forward looking and markets are always considered to be forward looking, but this is assuming a lot, in my opinion.
I do think that the Fed is on the case. I do not think that the Fed is as late as so many seem to. Were they supposed to tighten policy as economic activity had obviously slowed late Q4/early Q1 due to the surge of the Omicron variant of the SARS-CoV-2 coronavirus? I certainly do not agree with how far both fiscal and monetary policy have gone, and I mean that over decades, not the crisis-driven policies of the past almost two years. I don't think enough economists, in their selfish rush to publicly condemn, quite understand how aggressive the Fed and the Treasury Department had to be, and indeed were when it was precisely necessary in 2020, when a nation and a planet cried out in desperation. Did these "posers" think they would have done something differently? Or that the unwind would be a snap in a tough environment?
The Beige Book told us that the U.S. economy grew at a modest pace into year's end, but that business expectations have cooled in some places as Omicron spread. Ten of the 12 Fed districts reported that the spread of this variant was negatively impacting activity and only adding to already understood labor market shortages.
Now the hard work begins, as should be expected. Rejoice. Let us roll up our sleeves and enter the arena with great vigor and hearts pure. For this is the day we have all been granted. Waste it not.

Readers may recall back on Oct. 28, when Apple ( AAPL) reported fiscal fourth-quarter results and warned that supply issues would negatively impact fiscal first-quarter revenue by more than $6B (Apple will report fiscal first-quarter results in two weeks).
On Wednesday, five-star (at TipRanks) analyst Chris Caso of Raymond James wrote, "Our supply chain checks suggest that iPhone 13 production bottlenecks have now been solved. We believe those constraints began to ease in early December, likely providing Apple with more supply than expected, and therefore providing an upward bias to estimates." Psst.. this is a positive for Texas Instruments ( TXN) as well. Caso has an "outperform" rating on AAPL with a $185 price target. Your best pal has a $191 price target.
In other news, Apple appears to be in "serious" talks with Major League Baseball to broadcast the weekday national games package that Disney's ( DIS) ESPN relinquished after last season. ESPN did hang on to "Sunday Night Baseball" but not the regular Monday and Wednesday games. This has been seen by some of the streaming services as an opportunity to bolster content. Amazon ( AMZN) Prime has also been mentioned as a potential destination.

The big banks get earnings season rolling in earnest tomorrow (Friday). As always, Wells Fargo ( WFC) will bat in the top of the first inning. I have been long WFC for quite a while. I am up more than 54% in that name. Despite the recent run into the numbers, the shares have not yet hit my price target. I have a decision to make. 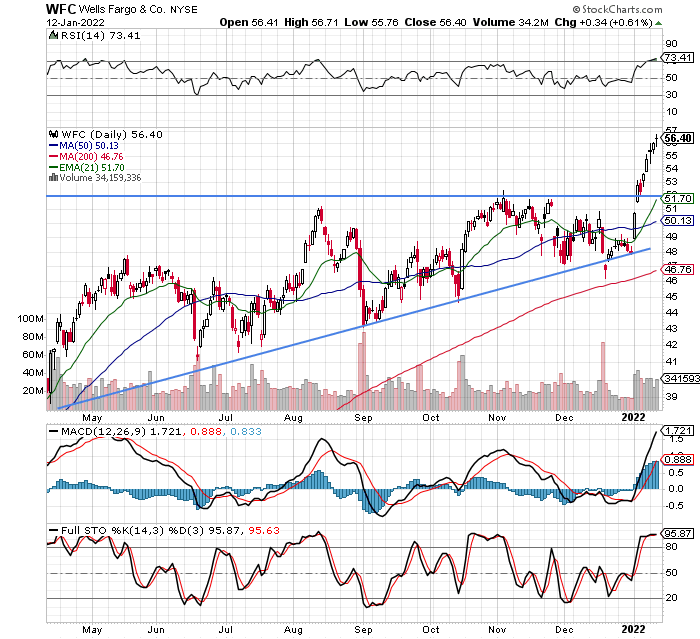 Note that WFC has broken out from a $52 pivot created by an "ascending triangle" pattern. I have a $62 target on the shares. Also note that whether you prefer to look at Relative Strength or the Full Stochastics Oscillator, the shares have moved into technically overbought territory in 2022. In addition, the incredible spike in the 12-day exponential moving average (EMA) has made the daily Moving Average Convergence Divergence (MACD) look like a brontosaurus poking its long neck out of the water.
Well, I am not going to risk nice gains made in a name that I stuck by well before almost anyone else would. Either I make a sale today on up to a quarter of my position... or I grab some Jan. 14th WFC puts despite my aversion against actually paying for options. The $55's went out on Wednesday at $0.56. I don't think adding fifty-six cents to my net basis will damage overall performance all that much. That said, it will let me sleep better tonight.

(Apple, Disney, Amazon and Nucor is a holding in the Action Alerts PLUS member club. Want to be alerted before AAP buys or sells these stocks? Learn more now.)

We Are in an Everything Bubble

Our economic lives are ruled by a cadre of unelected technocrats who have zero experience in the real world or dealing with real people.