The greatest significance in Tuesday's market action was the ability of each equity index to successfully test critical support levels for the second day in a row. However, all remain in near-term downtrends with the Federal Reserve rate decision at 2:00 p.m. looming over the markets. Expectations as to how the markets will respond to the Fed's announcement run the gambit.

We expect volatility, likely in both directions, just after the announcement as is usually the case. The key point will be whether or not the charts will once again be able to hold their respective critical support levels. That has yet to be seen.

Regarding the data, it has become more encouraging as noted below. With that said, we have no strong inclinations as to how the markets will respond to the Fed. We remain patient, awaiting more evidence that the storm clouds have passed. 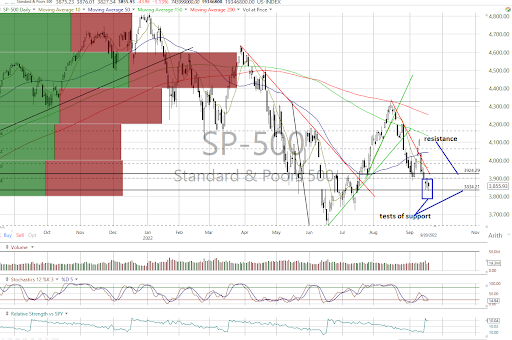 All the major equity indexes closed Tuesday with negative NYSE and Nasdaq internals.

As noted, all saw successful tests of Friday's intraday lows, which we view as a positive. Yet, all remain in near-term bearish trends lacking signs of positive reversals. We continue to respect the current trends until proven otherwise.

Market breadth remains weak with the cumulative advance/decline lines for the All Exchange, NYSE and Nasdaq negative and below their 50-day moving averages.

Stochastic levels are now oversold across the board but have yet to generate bullish crossover signals.

The percentage of S&P 500 issues trading above their 50-day moving averages (contrarian indicator) dropped to 21% and are very close to turning positive.

The Open Insider Buy/Sell Ratio lifted to 62.1% but remains neutral.

This week's AAII Bear/Bull Ratio (contrarian indicator) rose to 2.27 and is still on a very bullish signal as well, with bears outnumbering bulls by more than 2 to 1. 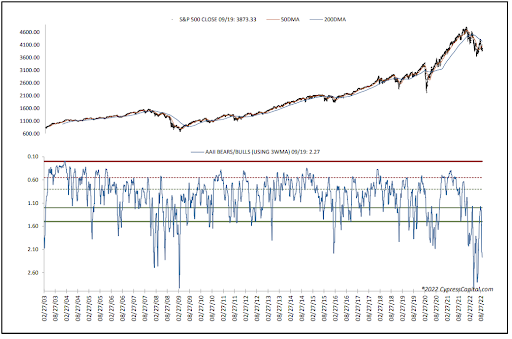 The Investors Intelligence Bear/Bull Ratio (contrary indicator) is 28.2/32.4 and neutral.

While supports have held on the charts and the data are offering some encouragement, near-term trends remain negative as does market breadth. We have no idea how the markets will respond to the Fed announcement. As such, we remain patient awaiting evidence the tide is turning positive.

Get an email alert each time I write an article for Real Money. Click the "+Follow" next to my byline to this article.
TAGS: Federal Reserve | Indexes | Interest Rates | Investing | Markets | Stocks | Technical Analysis | Trading | Treasury Bonds | U.S. Equity