Is it September over yet?

As the month ends, all the major equity indexes remain in near-term downtrends after another difficult day for the market Thursday. At least we can say that the down day did not result in any violations of support.

The data, on the other hand, have turned more encouraging regarding sentiment and the McClellan OB/OS Oscillator levels. We would note, however, the data have been flashing green for several days, which resulted only in a one-day bounce that failed to hold gains the following day.

As such, while the data is saying "go," we continue to believe it needs to be supported by more positive chart action before being embraced with a high degree of confidence. We continue to exercise patience regarding new purchases.

On the charts, all the major equity indexes closed lower Thursday with negative internals on the NYSE and Nasdaq as both saw trading volumes climb from the prior session.

Yet, while there were no violations of support on any of the charts, all the indexes remain in near-term bearish trends that have yet to show signs of a probable bullish reversal. We will respect the trends until a change in opinion is warranted by market action.

Cumulative market breadth continued to dig a deeper hole with the advance/decline lines for the All Exchange, NYSE and Nasdaq negative and below their 50-day moving averages.

The stochastic levels that have been oversold over the past several days have yet to trigger "bullish crossover" signals.

Despite the charts, the data are doing their best to offer some encouragement.

The percentage of S&P 500 issues trading above their 50-day moving averages (contrarian indicator) slipped to 5% and is still on a very bullish signal.

The Open Insider Buy/Sell Ratio lifted to 108.3. While it remains neutral, it has shown a consistent rise in insider buying over the past several days.

The detrended Rydex Ratio (contrarian indicator) dropped notably further into very bullish territory at -3.59. It remains at a level that has only been exceeded five times in the past 10 years as the ETF traders are now very heavily leveraged short. 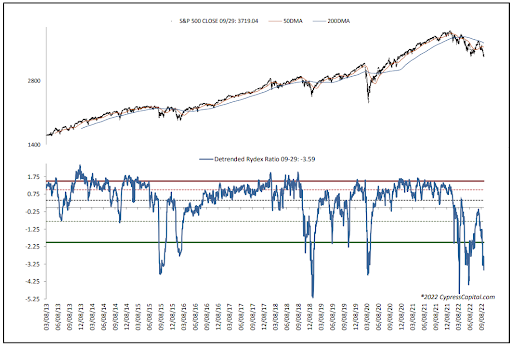 This week's AAII Bear/Bull Ratio (contrarian indicator) rose to 2.59 and is still on a very bullish signal as well, with bears outnumbering bulls by more than 2 to 1.

While the data dashboard is on very green signals, we do not feel they are actionable until the charts begin to show some signs that demand is overpowering supply. More patience is required, in our view.