After a mixed day Wednesday, we see further consolidation/pause of the recent market gains as likely.

As such, we would remain buyers on weakness when near support.

Let's break it all down through the charts and data. 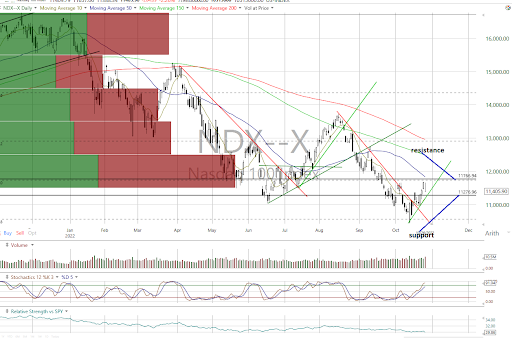 On the charts, the major equity indexes closed mixed Wednesday with the S&P 500, Nasdaq Composite and Nasdaq 100 (see above) posting declines as the rest managed minor gains.

Market breadth and up/down volumes were positive on the NYSE and Nasdaq.

As the market retreated from its early intraday highs, it left all the chart trends staying near-term bullish as there were no violations of support or trend. In fact, the Dow Jones Transports, Russell 2000 and Value Line Arithmetic Index all closed above their 50-day moving averages.

Market cumulative breadth remains positive on the All Exchange and NYSE with the Nasdaq's neutral.

Stochastic readings are quite overbought on the charts but have yet to generate bearish crossover signals. They are capable of staying overbought for extended periods.

We would also note the U.S. Dollar strength has weakened further and may take some pressure off of commodity prices due to their typically inverse relationship.

The data find the McClellan Overbought/Oversold Oscillators are still cautionary and overbought with the NYSE's very overbought (All Exchange: +7.44 NYSE: +106.87 Nasdaq: +92.52).

The detrended Rydex Ratio (contrarian indicator) saw a significant shift, rising to -1.71 from -3.29 and suggests some active short-covering on the part of the leveraged ETF traders. As such, it's signal downshifts from very bullish to bullish.

The detrended Rydex Ratio is -1.71 (bullish) 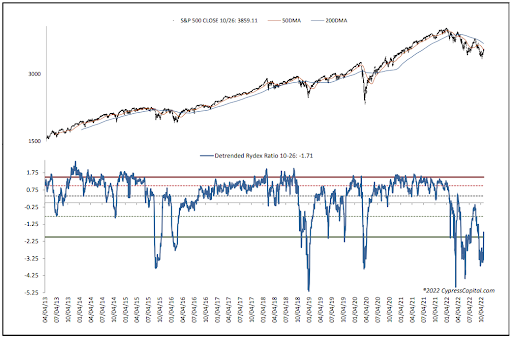 This week's AAII Bear/Bull Ratio (contrarian indicator) dipped to 2.49 but remains near a level of bearish sentiment only surpassed twice in the past two decades, those times being during the banking crisis in 2009 and the Covid pandemic in 2020.

While we remain optimistic in general, we believe the McClellan OB/OS Oscillators and stochastic levels still suggest some further digestion of recent gains. As such, we would remain buyers on weakness when near support.