As we head into the Thanksgiving holiday and weekend, how are the markets shaping up?

Market breadth was negative on both major exchanges Tuesday as trading volumes fell from the prior session. In contrast to recent activity, however, most indexes closed near their highs of the day as opposed to near their lows over the past several sessions.

There was some shift in the chart trends with one improving as two others weakened, leaving them still in a mix of bullish, neutral and bearish near-term trends.

Meanwhile, the data still find the McClellan 1-Day OB/OS Oscillators oversold as well as a pickup in insider buying activity, both of which offer some near-term encouragement, in our view. 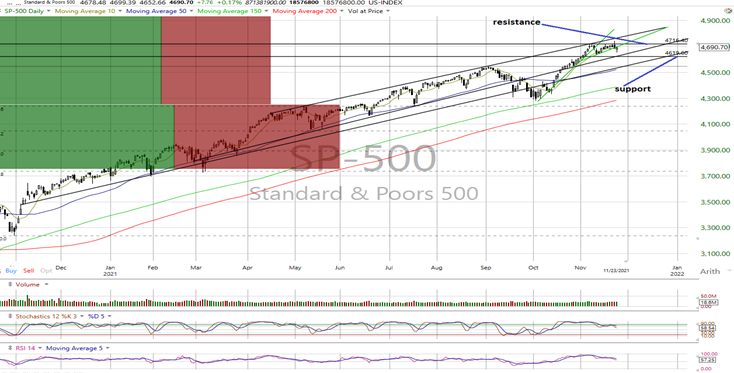 The major equity indexes closed mixed Tuesday with negative breadth on both the NYSE and Nasdaq as trading volumes dipped from the prior session. However, instead of closing near their intraday lows, they closed near their highs, possibly suggesting a weakening of selling pressure.

Some shifts in near-term trends were generated as the Dow Transports closed above its near-term downtrend line and is now neutral versus negative.

On the other hand, the Nasdaq Composite closed below support while the Nasdaq 100 and Value Line Arithmetic Index closed below their near-term uptrend lines and are now neutral versus positive.

So, only the S&P 500 is in an uptrend with the Russell 2000 negative and the rest neutral.

Unfortunately, cumulative market breadth weakened further with the cumulative advance/decline lines staying negative for the All Exchange NYSE and Nasdaq, all of which need strengthening to become more optimistic in our outlook.

The data finds the McClellan 1-Day Overbought/Oversold Oscillators still in oversold territory and still implying some potential for an oversold bounce or pause in weakness for the near-term (All Exchange: -79.01 NYSE: -73.9 Nasdaq: -81.83).

The detrended Rydex Ratio (contrarian indicator), measuring the action of the leveraged ETF traders, lifted to 1.28 and remains inside bearish territory.

The Open Insider Buy/Sell Ratio, on the other hand, rose to 46.4 from 39.1 as insiders increased their buying activity. It remains neutral but is improving.

We remain "neutral" in our near-term macro-outlook for equities awaiting better breadth.