Where do we go from here?

Every equity index violated its respective near-term support level Friday leaving all but one in near-term downtrends. Market breadth deteriorated further as well.

Yet, while the charts have yet to send signals suggesting the recent market declines from the March highs are complete, some encouragement is coming from the data dashboard, as discussed below. 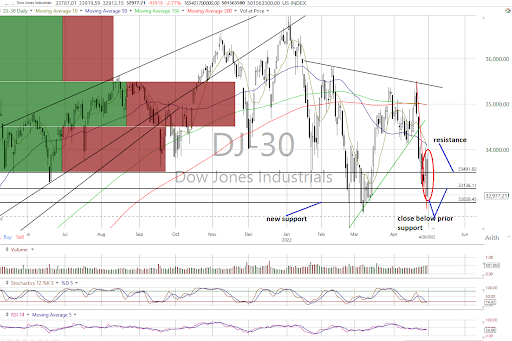 All the major equity indexes saw notable losses Friday as every index violated support leaving all in near-term downtrends, except the Dow Jones Transports, which remains neutral. All closed at or near the lows of their session ranges.

The DJI (see above), which had been neutral reversed to negative.

And while the charts sank, cumulative market breadth for the All Exchange, NYSE and Nasdaq remain negative and below their 50-day moving averages after making lower lows.

The stochastic levels remain oversold as was the case all last week and have yet to register bullish crossover signals.

As such, the charts are not suggesting a shift in direction at this point.

What Are the Key Index Support Levels to Watch?

The Data Are Offering Some Encouraging Signs

The percentage of S&P 500 issues trading above their 50-day moving averages (contrarian indicator) dropped to 27% and remains neutral although it is approaching the 25% level that has been associated with market lows.

The Open Insider Buy/Sell Ratio rose further to 85.6%. While staying neutral, it shows a continued increase in buying appetite on their part.

Meanwhile, the detrended Rydex Ratio (contrarian indicator) finds the leveraged ETF traders increasing their leveraged short exposer to -1.85 from -1.39. Thus, the current state of the insider/Rydex relationship continues to add weight to the positive side of the scales.

Also, last week's AAII Bear/Bull Ratio (contrarian indicator; see below) rose to a very bullish 2.25. It has seen these levels six times in the past 20 years with all but one resolving into a rally. The only outlier was the 2008-2009 financial crisis. The Investors Intelligence Bear/Bull Ratio (contrary indicator) was 33.3/32.1 as bears outnumbered bulls. 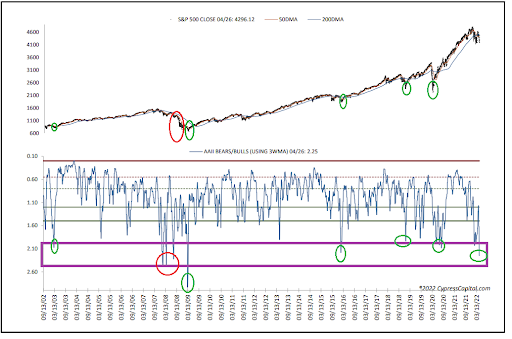 Both AAII and Investors Intelligence will release new data Tuesday that will likely, in our opinion, show a further increase in fear. Historically, these levels have been buying opportunities for those with longer term horizons.

While the data imply some relief may be forthcoming, the charts have yet to send essential signals that would suggest the recent market weakness has been exhausted.