While some resistance levels were tested in Friday's market bounce, none were able to be violated, leaving said resistance intact. As such, the near-term trends on the index charts remain a mix of neutral and negative projections.

The data remain generally neutral in its implications. On a positive note, the forward 12-month consensus earnings estimates from Bloomberg saw a nice uptick as fourth-quarter 2022 estimates were added. 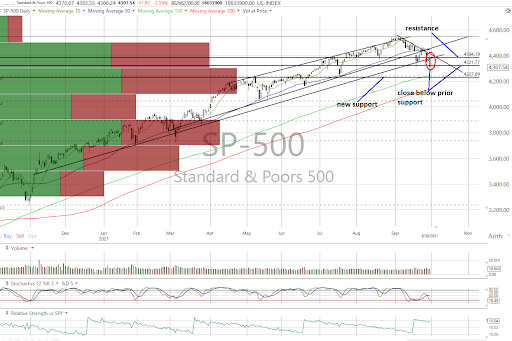 All the major equity indexes closed higher Friday with positive internals on lighter volume for the NYSE and Nasdaq.

All closed near their highs of the day with the MidCap 400 and Russell 2000 closing above their near-term downtrend lines and are now neutral as is the Value Line Arithmetic Index. The rest remain in near-term bearish trends.

The S&P 500 (see above) and DJIA tested their respective resistance levels but did not see enough demand to violate those levels. In our opinion, violations of resistance would be necessary to become more sanguine in our outlook.

Regarding market breadth, while Friday's numbers were positive, the cumulative advance/decline lines for the All Exchange, NYSE and Nasdaq remain negative and below their 50-day moving averages.

The S&P saw a bullish stochastic crossover registered but needs a violation of resistance to become actionable, in our view.

The Rydex Ratio (contrarian indicator), measuring the action of the leveraged ETF traders, rose to 0.92 and remains neutral versus its prior bearish implications as the ETF traders slightly increased their long exposure.

The Open Insider Buy/Sell Ratio is still neutral, lifting to 34.0.

Last week's contrarian AAII Bear/Bull Ratio (35.23/30.4) and Investors Intelligence Bear/Bull Ratio (22.3/47.1) (contrary indicator) both saw a drop in bulls. They remain neutral but have suggested the crowd was starting to get nervous. New numbers for those data points will be released Tuesday.

The forward 12-month consensus earnings estimate for the S&P 500 from Bloomberg has lifted to $212.81 per share, a notable increase. As such, the S&P's forward P/E multiple is 20.5x with the "rule of 20" finding fair value at approximately 18.5x.

Friday's positive action was, unfortunately, insufficient regarding the current messages coming from the charts and data. So although forward S&P 500 earnings estimates have taken on a more positive glow, our discipline suggests we should keep our current near-term macro-outlook for equities at "neutral/negative."

How Do You Play Gold and Silver, Bitcoin and Ethereum? Here's What I Do

I'm not a naysayer, though I do know where my physical gold and silver are when the lights go out.