Ax we head into Thanksgiving, what are the market's charts and data telling us?

All the near-term uptrends of the indexes remain intact. Meanwhile, the data scales are fairly evenly balanced.

As such, while we believe that the chart trends should be respected until proven otherwise, the current market valuation combined with the lessening of bearish investor sentiment suggest that investors should not chase price while waiting for weakness that would present better buying opportunities. 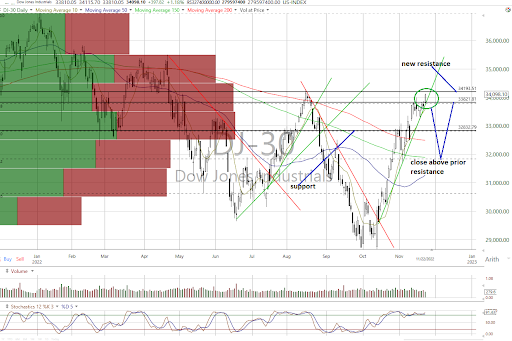 On the charts, all the major equity indexes closed higher Tuesday with positive NYSE and Nasdaq internals as trading volumes rose on both from the previous session. All but the Dow Jones Transports closed at or near their intraday highs.

The only technical event of importance was the DJIA (see above) closing above resistance as the close found all the indexes remaining in their near-term uptrends and 50-day moving averages.

There was no shift in the cumulative advance/decline lines for the All Exchange, NYSE and Nasdaq, which remain neutral with only the Nasdaq below its 50 DMA.

The McClellan Overbought/Oversold Oscillators remain neutral for the All Exchange and Nasdaq as the NYSE moved back into overbought territory (All Exchange: +31.41 NYSE: +58.69 Nasdaq: +14.11).

The percentage of S&P 500 issues trading above their 50-day moving averages (contrarian indicator) moved higher to 86% and is now on a bearish signal.

The detrended Rydex Ratio, (contrarian indicator) rose further to -0.66. It is now "neutral" after being bullish for the past several months as the leveraged ETF have dramatically reduced their leveraged short exposure that, in our view, was a positive force within the recent rally. As such, its ability to propel further gains has lessened.

The same can be said for the AAII Bear/Bull Ratio (contrarian indicator) as this week's reading slipped to 1.35 and is now bullish versus its very bullish signal of late.

While the charts remain healthy with uptrends that should be respected until proven otherwise, we reiterate the less bullish implications from the sentiment data combined with valuation suggest buying weakness near support versus chasing price has become more appropriate.