All the major equity indexes closed notably lower Wednesday, with all but one violating their support levels that we, obviously, were premature in raising. All the charts are in near-term downtrends with no definitive indication suggestive of a shift away from recent weakness.

With that said, the data are sending a very different message, saying that the markets are at levels that have historically been followed by market rallies that have proven quite beneficial for investors with a modicum of patience.

Our net take is that while the chart trends should not be ignored, a buying opportunity exists for those that have time horizons beyond the very near term. 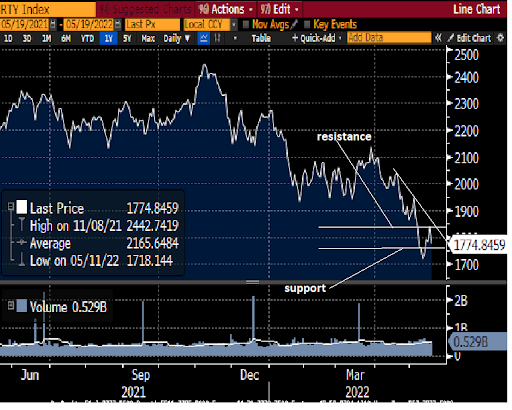 All the major equity indexes closed lower with broadly negative internals as all closed near their lows of the day. All but the Russell 2000 (see above) closed below support.

We are willing to eat some "crow" as we had raised our support levels Wednesday morning.

All the charts are in near-term downtrends with no implications of shifting at this point.

However, cumulative market breadth remained neutral on the All Exchange, NYSE and Nasdaq.

While the McClellan 1-Day Overbought/Oversold oscillators remain neutral (All Exchange: -9.8 NYSE: -12.82 Nasdaq: -8.05), the percentage of S&P 500 issues trading above their 50-day moving averages (contrarian indicator) dropped to 16% and back to a bullish signal.

Importantly, the Open Insider Buy/Sell Ratio at 114.1 is mildly bullish and at its highest level of insider buying since the Covid lows of 2020.

In sharp contrast, the detrended Rydex Ratio (contrarian indicator) remains very bullish at -2.9 as the leveraged ETF traders have historically high leveraged short exposure. Its chart shows only five times in the past decade have the ETF traders been so heavily leveraged short, all of which were followed by rallies. So, the Rydex/Insider dynamic is bright green. 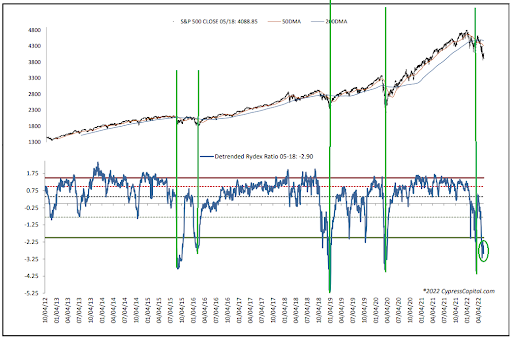 The crowd is essentially entirely on the bear side of the boat that usually finds sizable up moves as sentiment eventually starts to shift.

With investor sentiment at levels that have historically preceded market rallies as valuation has seen a notable moderation to discounted levels while the charts remain negative, we believe a buying opportunity now exists for investors with a modicum of patience although volatility may persist.