The charts of the major equity indexes have not been able to surpass important resistance levels after the notable market drop last Monday. The near-term trends are still a mix of neutral and negative implications. And that condition exists while market breadth remains lackluster and, in our opinion, not very supportive.

The data remains generally neutral in nature, but the recent reductions in 12-month forward earnings estimates for the S&P 500 combined with the lift in the 10-Year Treasury yield add to the cautionary side of the scales. 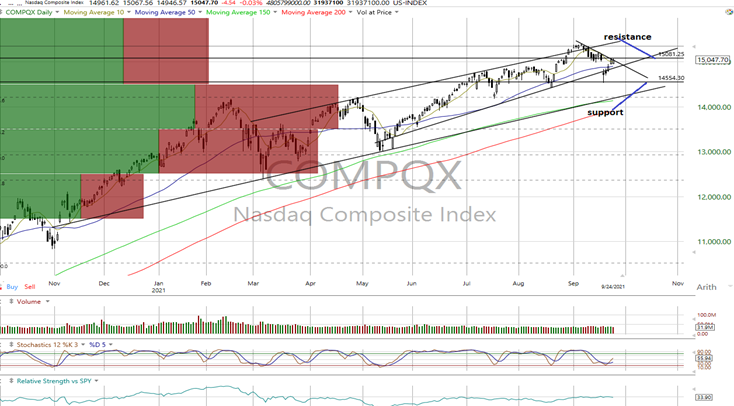 The major equity indexes closed mixed Friday with negative internals on the NYSE and Nasdaq as trading volumes declined on both from the prior session.

On the plus side, The S&P 500 managed to close above near-term resistance and downtrend line turning its trend to neutral from negative. It joins the DJIA, MidCap 400, Russell 2000 and Value Line Arithmetic Index in that condition.

Regarding market breadth Friday's weak breadth left the cumulative advance/decline lines for the All Exchange NYSE and Nasdaq neutral and below their 50-day moving averages.

The Rydex Ratio (contrarian indicator), measuring the action of the leveraged ETF traders, rose to 1.13 and bearish as the ETF traders increased their leveraged long exposure.

The Open Insider Buy/Sell Ratio is neutral at 76.2 as insiders did some buying during the recent correction. However, it has not been updated in a couple of days.

The forward 12-month consensus earnings estimate for the S&P 500 from Bloomberg dipped to $206.71 per share. These estimates have been gradually retreating over the past two weeks. As such, the S&P's forward P/E multiple is 21.6x with the "rule of 20" finding fair value at approximately 18.5x.

The 10-Year Treasury yield rose to 1.46%. We now suspect the 10-Year yield can approach the 1.5% level with support at 1.34%. As noted above, the decline in earnings estimates juxtaposed with the lift in the 10-Year yield adds to our market concerns.

The inability of the charts to violate important resistance levels post the recent shakeout combined with declining earnings and rising Treasury yields leaves us "neutral/negative" in our near-term outlook for equities.