Last week's strong market performance has pushed the 1-day McClellan Oscillators into overbought territory. And when combined with the widening spread in valuation (see below), we suspect they portend a period of consolidation over the near term.

As we have been stating for the past several sessions, we think not chasing price and buying on weakness near support is the most appropriate approach currently. 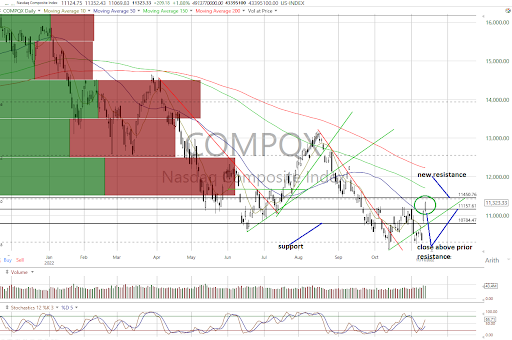 On the charts, all the major equity indexes closed higher on Friday with positive internals as most closed near their session highs. The only index not to close above resistance was the DJIA (page 2) as the rest made a higher high with higher lows.

The action left all the charts in near-term bullish trends as the Nasdaq Composite (see above) and Nasdaq 100 joined the rest of the charts in that regard.

Cumulative market breadth also improved as the cumulative advance/decline lines for the All Exchange, NSYE and Nasdaq are all positive and above their 50-day moving averages.

Only the Dow Jones Transports is overbought on its stochastic reading and has yet to trigger a bearish crossover signal.

The McClellan Overbought/Oversold Oscillators are, not surprisingly, overbought given the recent strength with the NYSE very overbought (All Exchange: +82.41 NYSE: +103.16 Nasdaq: +68.8). Once again, we suspect they present some headwind for the very near term.

The percentage of S&P 500 issues trading above their 50-day moving averages (contrarian indicator) stayed at 81% and mildly bearish.

The detrended Rydex Ratio, (contrarian indicator), which had been on a very bullish signal prior to the rally, is at -1.54 as the leveraged EF traders remain leveraged short. It remains in bullish territory as it represents potential demand.

The SPX forward earnings yield is 5.66%.

Last week's strength leaves the 1-day McClellan OB/OS cautionary while valuation has become a bit more stretched. So, while we are generally constructive in our outlook, we believe some pause/consolidation of the recent gains may offer better buying opportunities ahead. We continue to suggest buying weakness near support.