How do we interpret this week's declines, specifically on Wednesday?

Importantly, in our view, no support levels were violated Wednesday, nor have they been throughout this week's slippage. We view this action as a normal partial retracement of the substantial gains from the October lows thus far.

As such, we remain generally constructive in our outlook and continue to believe buying weakness near support as the best approach.

Now, let's take a close look at the charts and data.

All Support Levels Hold on Weakness 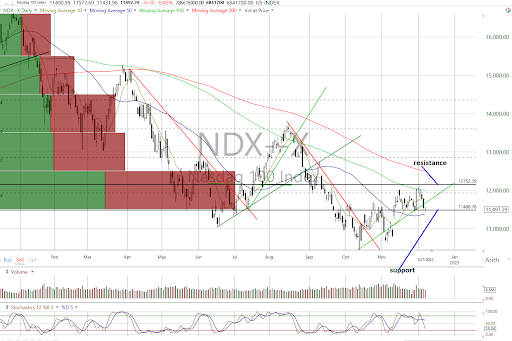 On the charts, all the major equity indexes closed lower Wednesday with negative NYSE and Nasdaq internals on lighter volume.

Importantly, in our opinion, no support levels were violated and have stayed intact throughout the week's declines while the near-term trends remain neutral across the board.

As noted above, thus far the action appears to be a consolidation of sizable gains from the October lows.

The cumulative advance/decline lines for the All Exchange, NYSE and Nasdaq remain neutral as well.

We would also note the stochastic levels that flashed bearish crossover signals from overbought conditions at the week's start are now oversold on the Dow Transports and Russell 2000  with the rest very close to doing the same.

On the data front, the bulk remains neutral.

The percentage of S&P 500 issues trading above their 50-day moving averages (contrarian indicator) was unchanged and at 78%. While still in its upper ranges, it is no longer on its prior caution signal.

The forward 12-month consensus earnings estimate from Bloomberg for the S&P 500 rose slightly to $225.52 per share. As such, its forward P/E multiple stands at 17.4x while remaining at a narrower premium to the "rule of 20" ballpark fair value of 16.6x.

We believe the charts show a normal consolidation of gains while the prior cautionary data has moderated as the valuation premium has declined. Thus, we remain buyers of weakness near support.

Get an email alert each time I write an article for Real Money. Click the "+Follow" next to my byline to this article.
TAGS: Indexes | Markets | Small Cap | Stocks | Technical Analysis | Trading | U.S. Equity