All the major equity indexes closed lower Wednesday after the release of the Fed's comments. All closed at or near their intraday lows with several violations of support, near-term uptrend lines and 50-day moving averages.

However, there is one in particular index to focus on. We would keep a close eye on the chart of the Nasdaq Composite, which is close to its long-term uptrend line around the 15,000 level that dates back to November 2020.

We have not been sellers, but the McClellan OB/OS Oscillators suggests it may be a bit early to be on the buy side. 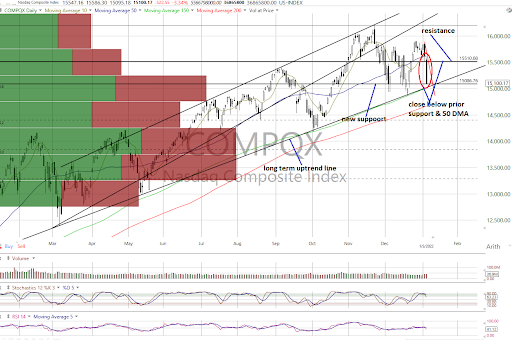 The indexes closed lower Wednesday, with very negative internals on the NYSE and Nasdaq. All closed near their lows of the day as selling persisted through the close.

Only the S&P 500's did not register technical damage as it closed at support. On the other hand, the Nasdaq Composite (see above), Nasdaq 100, Russell 2000 and Value Line Arithmetic Index closed below support.

As such, no near-term uptrends exist with the Nasdaq indexes and Russell negative and the rest neutral.

Cumulative market breadth weakened as well with All Exchange ad Nasdaq A/Ds turning negative and the NYSE's dropping to neutral with all below their 50 DMAs.

The McClellan 1-Day Overbought/Oversold Oscillators are not yet oversold but neutral (All Exchange: -0.54 NYSE: +9.18 Nasdaq: -9.21). They suggest potential further weakness.

The percentage of S&P 500 issues trading above their 50-day moving averages dropped to 66% and remains neutral but no longer near the upper end of its range for last year.

The Open Insider Buy/Sell Ratio rose to 41.3 and remains neutral.

This week's contrarian AAII Bear/Bull Ratio dropped to 1.12 but remained bullish as the crowd remains skeptical of the recent rally.

We remain "neutral/positive" in our near-term macro-outlook for equities as more aggressive Fed policy may have been largely baked into the cake Wednesday, in our opinion. While not sellers, the OB/OS implies potential for more weakness and a bit too early to buy.

Get an email alert each time I write an article for Real Money. Click the "+Follow" next to my byline to this article.
TAGS: Federal Reserve | Indexes | Markets | Stocks | Technical Analysis | Treasury Bonds | U.S. Equity