All the major equity indexes closed higher Wednesday with positive NYSE and Nasdaq internals as both traded on heavier volume than the prior session. All closed near their intraday highs.

Some technical improvements came in the form of violations of resistance and some intermediate downtrend lines that had been in effect since April 1.

The net result is all the charts are in near-term uptrends as is cumulative market breadth for the All Exchange, NYSE and Nasdaq.

Looking at the data, the rally pushed the 1-day McClellan OB/OS Oscillators back into overbought territory, which may temper the very near-term, as the forward 12-month consensus earnings valuation for the S&P 500 continues to slip toward fair value.

As such, we speculate that some near-term sideways action may be forthcoming within an overall improving environment for equities. 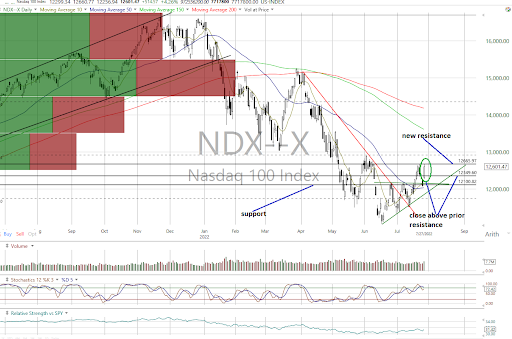 All the major equity indexes closed higher Wednesday with strong internals on heavier volume as all closed at or near their intraday highs.

Positive technical events were registered on the Nasdaq Composite, Nasdaq 100 (see above) and Value Line Arithmetic Index as they closed above their respective resistance levels.

Also, the MidCap 400 Index and Value Line index closed above their intermediate-term downtrend lines that had been stifling progress since April 1.

As such, all the charts are near-term bullish as are the cumulative advance/decline lines for the Al Exchange, NYSE and Nasdaq.

Wednesday's rally pushed the McClellan OB/OS Oscillators back into overbought territory that may exercise some restraint of progress for the near-term (All Exchange: +69.27 NYSE: +92.92 Nasdaq: +53.7).

The detrended Rydex Ratio (contrarian indicator) rose to -0.92 and is mildly bullish versus its previous bullish status a few weeks ago.

However, the Investors Intelligence Bear/Bull Ratio (contrary indicator) moderated to neutral with the bears and bulls being dead even at 35.2/35.2.

The forward 12-month consensus earnings estimate from Bloomberg for the S&P 500 continues to decline and is down to $236.07 per share. As such, the S&P's forward P/E multiple rose to 17.0x with the "rule of 20" ballpark fair value at 17.3x, narrowing the spread.

Wednesday's rally had a very constructive impact on the charts and market breadth. However, the OB/OS and narrowing of the S&P's forward P/E multiple to ballpark fair value suggests we may see the markets take a "time out" over the very near term before resuming progress.