As we head toward Fed Chair Jerome Powell's important speech at Jackson Hole Friday, what can we glean from the market's technicals?

The major equity indexes closed mixed Tuesday, with all closing near their intraday lows. However, there were no violations of support, leaving all the indexes in near-term neutral trends although cumulative market breadth remains negative.

The data is giving some mild encouragement, although the forward 12-month consensus S&P earnings estimates continue to slip, leaving the valuation at a slight premium to fair value (see below).

Let's review the charts and data to see where this all will lead us. 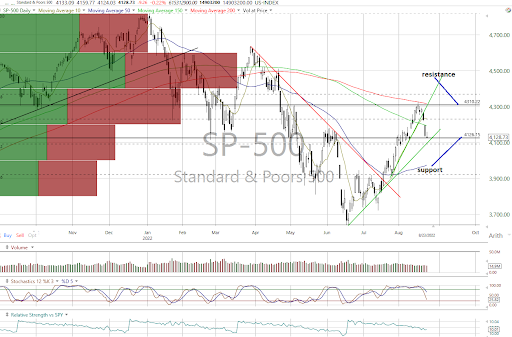 The major equity indexes closed mixed Tuesday with the NYSE having negative breadth but positive up/down volume while the Nasdaq was positive on both counts.

Buying evaporated near the close with all near their intraday lows.

Importantly, there were no violations of support, leaving all in near-term neutral trends and above their 50-day moving averages.

The S&P 500 (see above), and MidCap 400 closed at support that should be monitored closely, in our opinion.

Unfortunately, the cumulative advance/decline lines for the All Exchange, NYSE and Nasdaq remain negative.

The stochastic levels for the Nasdaq Composite and Nasdaq 100 are oversold but await bullish crossover signals.

The Open Insider Buy/Sell Ratio rose to 44.0% and remains neutral as well.

The detrended Rydex Ratio (contrarian indicator) lifted to -0.31 and is also neutral.

This week's AAII Bear/Bull Ratio (contrarian indicator) was unchanged at 1.28, staying on a bullish.

The Investors Intelligence Bear/Bull Ratio (contrary indicator) was also unchanged with the number of bears dropping and bulls at 27.8/44.4 (mildly bullish). Its three-week moving average is mildly bullish at 70.75.

The forward 12-month consensus earnings estimate from Bloomberg for the S&P 500 dipped further to $232.82 per share. The valuation spread narrowed a bit but is still at a slight premium to ballpark fair value via the "rule of 20" with the S&P's forward P/E multiple at 17.7x versus 17.0x.

While the McClellan 1-day OB/OS Oscillators with some oversold stochastic levels have, in our view, turned down the temperature of the recent correction, there is insufficient evidence to declare with confidence that we are out of the woods. As a result, some caution may still be prudent.