While the equity markets look generally healthy, there are some factors under the surface that suggest some near-term caution is warranted.

All the charts of the major equity indexes remain in near-term uptrends, as does market cumulative breadth, and have yet to send any cautionary signals.

However, the data dashboard continues to flash warning signals suggesting some near-term market consolidation of recent gains is becoming more likely. In particular, the detrended Rydex Ratio (contrarian indicator) (see below) has weakened to the point that the potential upside catalyst we have been highlighting has now been largely spent. 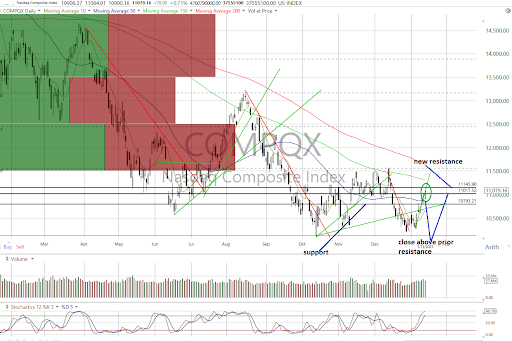 On the charts, all the major equity indexes except the Dow Jones Transports closed higher on Friday with positive market internals on lighter volume.

All closed near their session highs with the Nasdaq Composite (see above), Nasdaq 100, MidCap 400 and Russell 2000 closing above resistance.

All are in near-term uptrends and above their 50-day moving averages as are the cumulative advance/decline lines for the All Exchange, NYSE and Nasdaq. They have yet to generate any cautionary signals from a technical perspective.

However, the stochastic readings are very overbought and in the upper 90s but also have yet to register bearish crossover signals.

On the data front, the cautionary signals persist.

The McClellan Overbought/Oversold Oscillators are all in very overbought territory (All Exchange: +135.7 NYSE: +144.61 Nasdaq: +129.51). They continue to suggest some consolidation is becoming more likely in the near term.

The percentage of S&P 500 issues trading above their 50-day moving avreages (contrarian indicator) is unchanged at 75.0%, staying neutral but just shy of turning bearish.

The Open Insider Buy/Sell Ratio remains neutral at 26.3 but just shy of turning bearish as well, as insiders have notably pulled back from their buying at the start of the rally.

The detrended Rydex Ratio (contrarian indicator) (see below) rose to -0.83 and is now only mildly bullish. In our opinion, the strong bullish catalyst we have been noting from the inception of the rally has now largely been spent. 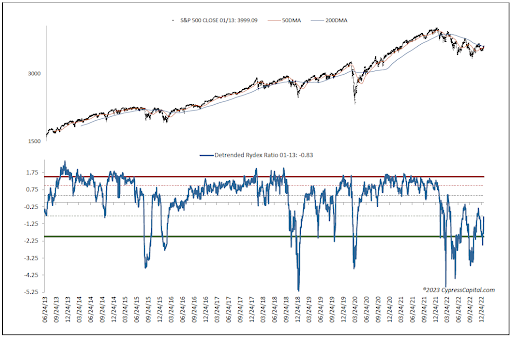 The Investors Intelligence Bear/Bull Ratio (contrary indicator) is bullish at 33.81/36.6 as the number of bears rose and bulls declined.

While the charts say everything is fine, the data suggest there are some factors under the surface that suggest better buying opportunities may be in the offering over the near term.