We expect that some further pause/consolidation of the recent rally is likely from here.

The market remains overbought. while investor fear, a contrarian indicator instrumental in generating the recent market rally, has seen a notable reduction of late (see below).

With the S&P 500 trading at a slight premium to forward 12-month fair value added to the equation, we think that while the uptrends should be respected, better buy points may be available in the not too distant future. 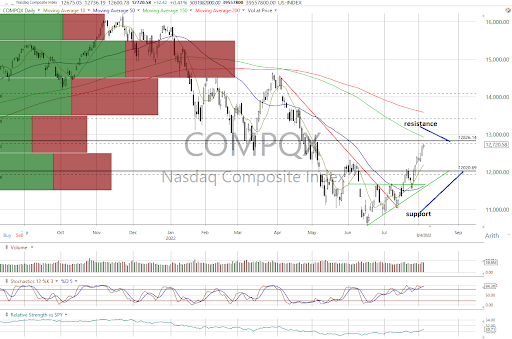 The major equity indexes closed mixed Thursday with negative NYSE and positive Nasdaq internals. Only the Nasdaq Composite (see above), Nasdaq 100 and Dow Jones Transports managed to post gains as the rest closed in the red.

However, no technical events of importance were generated as all support levels remained intact as do the near-term uptrend lines present on each of the charts.

The cumulative advance/decline lines remain bullish and above their 50 DMAs for the All Exchange, NYSE and Nasdaq as well.

There was one bearish stochastic crossover signal registered on the DJT as the rest remain overbought.

The McClellan Overbought/Oversold Oscillators are still in overbought territory and, in our view, suggesting some near-term caution (All Exchange: +81.36 NYSE: +84.86 Nasdaq: +78.58).

The percentage of S&P 500 issues trading above their 50-day moving averages (contrarian indicator) remains neutral and unchanged at 71%.

We believe the detrended Rydex Ratio (contrarian indicator) should be noted as it has dropped to a neutral -0.38. While not negative, it suggests the leveraged ETF traders have done a significant amount of covering of their prior extremely leveraged short exposure. As such, that propellant has now been largely spent, in our opinion.

The detrended Rydex Ratio is -0.38 (neutral)

However, the Investors Intelligence Bear/Bull Ratio (contrary indicator) moderated and stayed neutral with the number of bears dropping and bulls increasing at 33.3/38.9.

The 10-Year Treasury yield closed lower at 2.68%. We view support as 2.49% and resistance at 2.78% with the caveat that it may have formed a "head & shoulders" topping pattern regarding yield.

While we remain of the opinion that we are in an improving environment for equities, the data and valuation are suggesting some period of pause/consolidation of recent gains is becoming more likely. Thus, we believe better buying opportunities may present themselves over the near term.