The market is notably weaker Tuesday morning but, in our view, is testing Friday's intraday lows. If the lows are  successfully tested, as they were on Friday, we believe it would provide further confidence that the market's near-term lows have been established, setting up for a period of some strength.

The fact that the tests were successful on Friday is an encouragement, in our opinion, it implies the action on Jan. 10 was, very likely, a washout of the sellers. 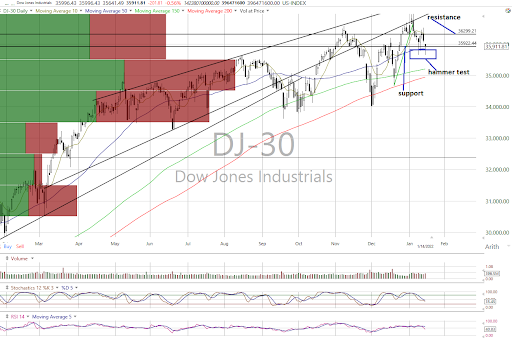 The major equity indexes closed mixed Friday on higher volume as breadth was negative but up/down volume was positive on the NYSE and Nasdaq.

Of greatest importance, in our opinion, is that all but the Dow Jones Transports closed near their intraday highs, recovering from notable losses earlier in the session. In fact, it appears, from a technical perspective, that the hammer levels of last Monday, Jan. 10, were tested successfully as noted most obviously on the DJIA (see above) and MidCap 400.

As a result, all the indexes remain in near-term neutral trends.

However, cumulative market breadth did deteriorate as the All Exchange turned negative from neutral and the NYSE turned neutral from positive. The Nasdaq A/D remains negative.

The percentage of S&P 500 issues trading above their 50-day moving averages slipped to 57% and remains neutral as the Open Insider Buy/Sell Ratio rose to 45.8 from 41.1, staying neutral as well.

The detrended Rydex Ratio (contrarian indicator), measuring the action of the leveraged ETF traders, also rose to 0.95 and remains neutral.

The Investors Intelligence Bear/Bull Ratio (23.5/50.6) (contrary indicator) remains neutral as the number of bulls and bears dropped from the prior week.

We believe Friday's volatility, which saw significant recoveries for the indexes from their intraday lows, successfully testing their respective "hammer" levels, adds more credibility to our suspicion that the action of Jan. 10 was more likely a washout of sellers.

The weak market Tuesday morning suggests another test is at hand today. Should they also survive their tests, it would add more likelihood that sellers have dissipated to the point that some progress may be in the offering over the near term.

Get an email alert each time I write an article for Real Money. Click the "+Follow" next to my byline to this article.
TAGS: Indexes | Markets | Stocks | Technical Analysis | U.S. Equity