By STEPHEN GUILFOYLE Nov 03, 2022 | 07:11 AM EDT
Stocks quotes in this article: CI, COP, CMI, DDOG, K, MAR, MRNA, W, ZTS, AMGN, SQ, COIN, PYPL, SWKS, XLK, XLY, XLU
There's a reason that football teams with undersized offensive lineman often make use of a triple-option type of offensive scheme in order to repeatedly gain a few yards at a time. The pounds given up on average at the line of scrimmage make traditional pass blocking or running out of a pro-set very difficult as these lineman are often unable to hold their blocks for more than two or three seconds. The triple-option is quick, though, and the plays run out of most triple-option sets are largely plays full of real-time decision making where deception and misdirection are key.
In other words, the idea is to force the defensive players on the team with the larger, stronger, faster players to hesitate, to be indecisive for just a second or two. All the offense needs is three or four yards on each play in order to keep the ball moving.
The Federal Reserve's FOMC ran a bit of misdirection on U.S. financial markets on Wednesday afternoon. While it is difficult to imagine that misleading the investing public for more than half an hour was intentional, it is also quite difficult to imagine that those who put together Wednesday's official statement or Fed Chair Jerome Powell himself could not understand that this is just what they did.
They/he could not understand that following up a statement that could only be interpreted as having dovish undertones with hawkish rhetoric was amateurish at best? Let's leave it at that. Let's assume that what happened was simply bush-league, so we can go on without throwing around what could easily turn into mud-slinging and become accusatory language.
One does have to wonder just what the FOMC and Jerome Powell were thinking, though. In fact, one must wonder if they were even thinking at all.

The FOMC decided to increase the target range for the Fed Funds Rate by 75 basis points to 3.75% to 4%. This was expected. This was priced in. Nothing moved anywhere in U.S. financial markets on Wednesday in response to this decision.

Unless those folks sitting at the table of the committee (FOMC) truly avoid all financial media, then they were well aware that financial markets had turned in mid-October and that turn had been confirmed through increased trading volume about a week later as traders and investors had started to believe in if not a Fed pivot, then a slowing down of the Fed's aggressive attack on U.S. monetary conditions in order to slow inflation. The belief was that the FOMC had become aware that their actions were starting to damage U.S. and global economic conditions.
There were two sentences in the statement, one amended and one new, that reinforced this belief at 14:00 ET on Wednesday. The statement reads:  "The Committee anticipates that ongoing increases in the target range will be appropriate in order to attain a stance of monetary policy that is sufficiently restrictive to return inflation to 2 percent over time. In determining the pace of future increases in the target range, the Committee will take into account the cumulative tightening of monetary policy, the lags with which monetary policy affects economic activity and inflation, and economic and financial developments."
OK. Right there, the public is told that future rate hikes will likely be more measured and require more reasoned thought as the FOMC seems to be fully cognizant that conditions in the real economy lag policy (by 9+ months) and that economic/financial conditions are changing.
It is very easy to see these changes in the statement as dovish. In fact, the message is obviously crafted in order to signal that kind of thinking as that is where the public was going into this week's meeting. If the statement is not meant to be used as a tool by the public at large, then we simply do not need one.

Bait and Switch: The Press Conference

This is where misdirection football begins.
After providing the expected rate change, as well as precisely the kind of language in the statement that the doves were looking for, Powell followed up that dovish statement with a hawkish press conference. The S&P 500 would suffer its worst day on a Fed Day in almost two years after having been up significantly for the session with less than 90 minutes until the closing bell at 11 Wall Street.
"Bait and Switch?" How else to describe what transpired.
Powell stated that a slowdown in rate hikes "may come as soon as the next meeting or the one after that." So far so good. That sounds in line with the statement. Then he dropped the gloves and started swinging. He said, "It is very premature to be thinking about pausing." He also said, "Incoming data since our last meeting suggests that (the) ultimate level of interest rates will be higher than previously expected."
In response to a reporter's question on how the committee will know when enough progress has been made to relax a bit, Powell said that he is looking for several months of declining inflation. Not just a halt to inflation, but a decisive reversal.

The gist of Wednesday afternoon's press conference is the following. The Fed may start being more nuanced in their frontal assault against the short end of the curve. However, those short-term rates, the terminal rate will likely be higher than markets have anticipated and will also likely remain at those elevated levels for longer than anticipated.
Readers should understand that higher for longer is how hard landings are built. The U.S. economy is now on a collision course with destiny, unless more sentient heads prevail.
It would have been bad enough if this was the honest consensus opinion of the committee. We can disagree like adults. But the fact that the hawkish messaging of the press conference followed within half an hour, the FOMC's own dovish-looking messaging in the print of the official statement?
A freshman-year economics student would have understood this as a mistake. Not this crew though.

I have good news and bad news.
The bad news is that some significant technical damage was done to equity markets on Wednesday afternoon. The good news is that all is not lost, yet.
All of our major equity indexes (with more than 30 constituent members) were down at least 2.5% on the day. Down went the S&P 500, down went the Nasdaq Composite, down went the Nasdaq 100, down went the Russell 2000 and so on. All 11 S&P sector-select SPDR ETFs closed lower for the day, with two, Technology ( XLK) and Discretionaries ( XLY) , declining more than 3%, and Utilities ( XLU) having "outperformed" at -0.97%.
Losers beat winners by roughly 7 to 2 at the NYSE and about 8 to 3 at the Nasdaq, as advancing volume took a 12.3% share of composite NYSE trade and an 18.6% share of composite Nasdaq-listed trade.
Trading volume was a big deal on Wednesday, especially since much of it occurred during the final 90 minutes of the regular session. Aggregate NYSE-listed trading volume increased 9.3% day over day for names listed at the NYSE and increased 16.2% day over day for Nasdaq-listed names. This implies heavy institutional selling. The pros were very active. This as Treasury securities sold off as well.
I see the much-spoken-of 10-Year/ 3-Month yield spread having uninverted on Thursday morning after going out at -12 bps on Wednesday. We'll see how that develops. 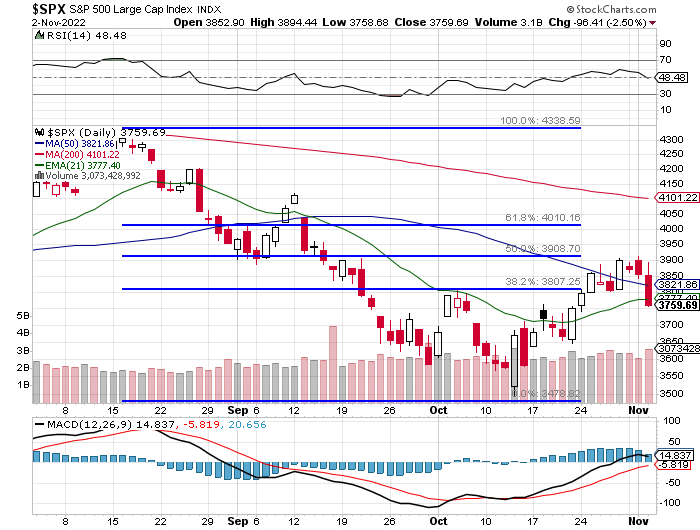 Readers will note, in the chart above, that the S&P 500 was stopped dead in its tracks at the 50% retracement level of the early August-into-October selloff (this is known as the "halfway back" point and is not a true Fibonacci level) during the confirmation rally on October 21. In fact, the index has been halted there or close to that spot in four of the past five sessions. The selloff on Wednesday surrendered both the 50-day simple moving average (SMA) (why you saw institutions reducing exposure) as well as the 21-day exponential moving average (EMA) (why you saw the swing crowd jump ship).
Potentially key: The selloff brought the index all the way down to the high of the October 21 session without piercing that daily high. Therefore, despite how you feel this morning, this attempted rally that began on October 13, is not dead. Oh, it is under pressure, and it could fail, but as long as the low of October 13, which is way down at 3491, holds, we still have a tradeable environment.
What investors have to watch for now, is a confirmation day for Wednesday's selloff. As October 21 confirmed October 13, this game is a double-edged sword, and could get confusing at this point. Let's see what "jobs day" this Friday (tomorrow) and "CPI day" a week from today bring. The problems there are that consensus is for another month of 200K jobs being created in October while the Cleveland Fed projects an October CPI growth of 8.1% and core CPI growth of 6.6%. Numbers like that would not help. 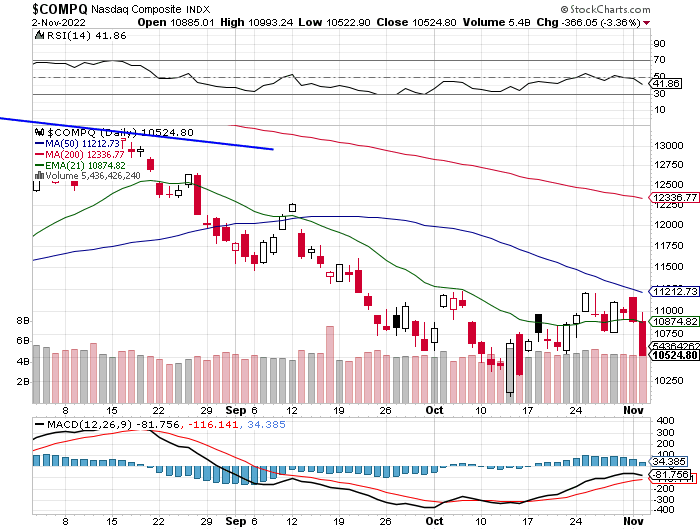 The situation is considerably more dire for the Nasdaq Composite (see chart above). That index also surrendered its 21-day EMA on Wednesday after never even having taken back its 50-day SMA. In addition, this index can only give up another 4.14% before it undercuts the lows of October 13.
Oh, I almost forgot. Have a nice day.