For centuries there had been friction. OK, more than friction. Between what was developing as the Western Roman Empire and the many "barbaric" Germanic tribes. These "barbarians" after many years of contact were developing both economically and militarily.

In early 395 AD, Augustus Theodosius, who had defeated the Goths and been on the winning side of two civil wars, passed on. The Visigoths, who had a treaty in place with Rome since 382, now considered that treaty null and void. The empire had split and grown weak. Leadership, particularly in the west, under Honorius, the younger son of Theodosius) fractured.

Long story short, the Visigoths under the leadership of Aleric with the help of Roman slaves put the city of Rome under siege successfully on their third attempt in 410. Rome had been sacked for the first time in roughly 800 years. By 419, the population of Rome would nearly halve. Eventually (by 455), the Vandals would also sack Rome, Roman armies, who were no longer very Roman, would rebel. Rome had grown obsolete. The western empire would completely collapse by 476.

The point is that nothing is forever. All life, all learning, from parenting to aging to investing is about adaptation. The ability to evolve, to be what is needed when it is needed, is difficult, but must always be the individual goal.

It wasn't that equity markets were very weak. The S&P 500 gave up just a smidge, but that was the third smidge in a row. The S&P 500 also now tests its own 21-day exponential moving average (EMA) as the Full Stochastics Oscillator and the daily Moving Average Convergence Divergence (MACD) for this index both show considerable room for some kind of potential correction from this still arguably overbought level. 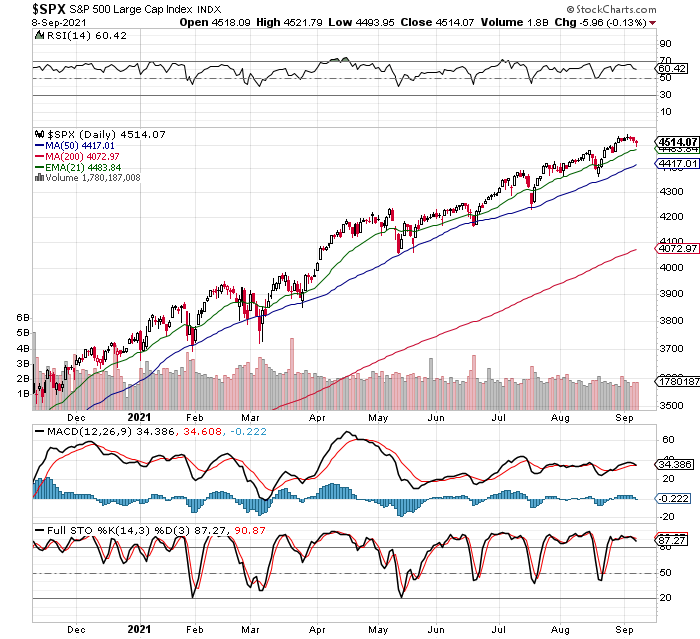 The S&P 500 for the entire year 2021 to date has failed on every single test of that 21-day line only to find firm and broad portfolio level support at the 50-day simple moving average (SMA). The 50-day line currently runs at 4417 or down another 97 points from where the index stood as the closing bell rang its last on Wednesday afternoon.

Now, take a look at the other of our marketplace's two major large-cap indices, the Nasdaq Composite. The Composite gave up a little more than the rest of the large-cap pack on Wednesday, and here... this was the first "down" day after four consecutive "up" days. 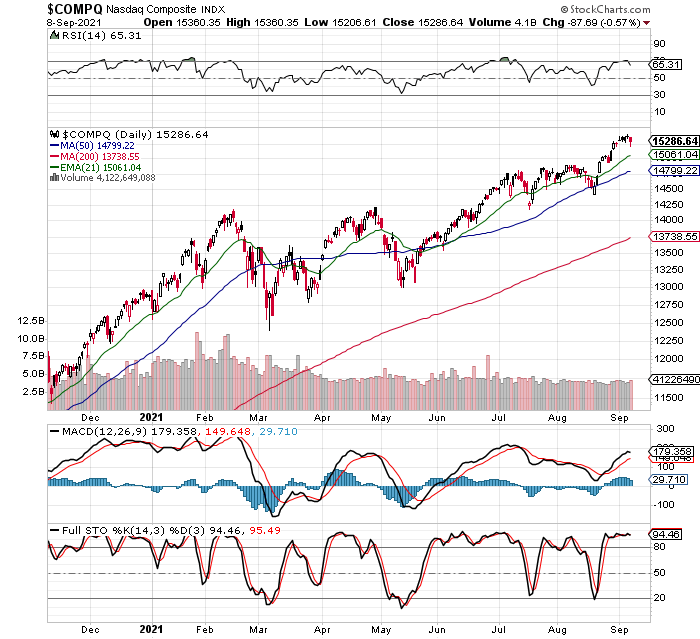 Just look how extended the Composite appears. The Full Stochastic Oscillator is not only screaming "technically overbought" in your face and mine, that oscillator is also at a point where it has typically turned for the worse. In addition, the MACD is stretched and the Relative Strength Index (RSI) looks a bit lofty, even after Wednesday's mild selloff. The only thing, for tech and small-to mid-cap investors, the Composite does not typically find a toehold at the 50-day line, like the S&P 500 does.

If year-to-date history bears out, the Nasdaq Composite, should it repeat the pattern of pushing lower through the 50-day line, but still creating a higher low, which means that the index could surrender  roughly 400 points from here without doing more than pressuring the existing uptrend. Seems surreal.

Oh, does it need to be said that trading volumes were indeed heavier (but not heavy), and that sector allocation favored defensive types? That does add some level of conviction to the broader move even if the moves were mild. This means to me that there was an increased level of portfolio participation in equity markets on Wednesday. Most likely still at this point, limited to profit-taking.

More like what did not? First up was Morgan Stanley Wealth Management CIO Lisa Shalett, who sees U.S. equities correcting potentially as much as 10% to 15% by year's end. Readers will recall that Morgan Stanley was one of several outlets to give their third-quarter U.S. GDP projections a significant haircut last week.

Shalett on Wednesday, said "The issue is that the markets are priced for perfection and vulnerable, especially since there hasn't been a correction greater than 10% since the March 2020 low." In the way of "unasked for" advice, Shalett offers, "Consider taking profits in index funds and rebalancing portfolios toward high quality cyclicals especially financials.... also seek consistent dividend payers in consumer staples and health care."

It's no secret. We all know what has stalled the great economic recovery. Covid, or more specifically, the Delta variant of Covid. The virus finally seems to have peaked in Florida and a number of highly impacted states, but is still gaining momentum across new areas, hitting the unvaccinated the hardest, but also hitting the vaccinated, especially if vaccinated early on.

As seasons change, Americans living in southern states will return to the great outdoors, which one might think would alleviate the pressure on those areas. By the same token, Americans living in northern climes will head back indoors. What that brings with it, we have no idea. Or maybe we do.

Many northern states, especially in the Northeast, have much higher vaccination rates than does the nation more broadly. Will that offer the protection, at least from severe disease, as advertised? I have suffered from the disease. I have been vaccinated. I still mask up whenever indoors (outside of my own home) even if just for a minute. That is one beast I do not want to have to wrestle with ever again.

U.S. Treasury Secretary Janet Yellen felt concerned enough to warn congressional leaders busy wrangling over the size of supposedly coming fiscal spending packages, that the federal government is probably closing in on going broke. Already going to extraordinary measures to stretch federal dollars, Yellen sees the Treasury exhausting the ability to fund itself at some point during October should Congress fail to either suspend or extend the debt ceiling.

This, while New York Fed President John Williams stated that "it could be appropriate" for the Federal Reserve Bank to begin tapering its $120B per month balance sheet expansion program before year's end. Williams said, "Assuming the economy continues to improve as I anticipate, it could be appropriate to start reducing the pace of asset purchases this year, I will be carefully assessing the incoming data on the labor market and what it means for the economic outlook, as well as assessing the risks such as the effects of the delta variant."

Now, I don't mean to be critical (actually... I mean very much to be critical.), but if every other economist to our front sees U.S. economic growth stumbling, and the mismatch between labor market demand and supply is at a crossroads that will most likely pressure wage growth, just what is this guy thinking? Anyone out there think this economy is cooking with gas? Me neither.

Either Williams thinks the central bank should get on with tapering because he fears that the current pace of inflation might be more structural than transitory, or he thinks that tapering should get under way ahead of a more significant economic slowdown. Those are the choices.

The whole "head in the sand" routine isn't going to work anymore. Investors, no check that, people, are too sophisticated to be spoken to like morons in 2021.

I found the money. It's over here. As equity markets came under pressure debt markets came into some newfound allocation. The U.S. Treasury auctioned off $38B worth of 10-Year paper on Wednesday afternoon.

To say the auction was strong would be accurate. At a high yield of 1.338%, and an above-average bid to cover of 2.6, indirect bidders (foreign accounts) took down $27B or an incredible 71% of the issue.

Just an FYI, 38 IG borrowers tapping the marketplace is an all-time two-day record. According to bond traders, the marketplace, generally speaking, absorbed all of these issuances in aggregate quite well.

All of this, as the company notes, amid continued headwinds due to Covid-related supply chain issues that may not be ironed out until this calendar year ends. Seems fanciful, but the numbers are there. The same pandemic that has constricted supply chains has driven demand for upscale furnishings as well. 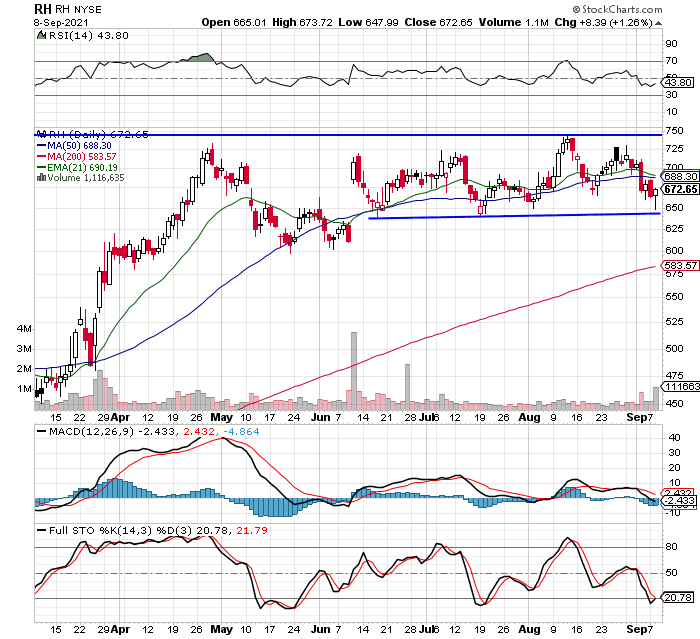 I see the shares trading around $683 overnight, up about 1.5%. As readers/traders can see, RH closed on Wednesday almost technically oversold. RH has been trading in a neatly defined basing pattern of consolidation since mid-June. Resistance has been in place since late April.

Pay attention to the 21-day exponential moving average (EMA) ($690), and the 50-day simple moving average (SMA) ($688). If this morning's pop can not pull that green line away from that blue line, the shares, in my opinion, are still likely to pressure the lower bound of this range.

I need the swing crowd on board to get on board myself. They, or most of them anyway, will wait for a signal from that thin green line, or find something else to do.

Get an email alert each time I write an article for Real Money. Click the "+Follow" next to my byline to this article.
TAGS: Federal Reserve | Futures | Indexes | Interest Rates | Markets | Politics | Rates and Bonds | Small Cap | Trading | Treasury Bonds | U.S. Equity

Steve Wynn Accused of Working for China to Lobby Trump

There's no doubt that the Fed Chair was about as hawkish as we have ever heard him, but his crew seemed to try to temper that hawkish posture.