The "Sort Of" Up Day

For the most part, equities did quite well on Monday. Sure, the Nasdaq Composite and the Nasdaq 100 had a tough day. Apparently, investors have remembered to sell growth, to sell tech (software in particular) when they sell Treasuries. Otherwise, it appeared that investors pumped some life back into the reflation trade, as they have been for a number of sessions now.
While the already mentioned Nasdaq brothers and the S&P 500 were pedaling backwards, capital flowed into small-to mid-cap stocks, flowed into the transports that were led by the likes of Avis ( CAR) and Ryder ( R) as well as maritime transport stocks thanks to surging prices for fossil fuel futures.
Lookin at sector performance, Monday paints a much rosier picture than you may have realized. Of the 11 sector select SPDR ETFs, cyclical groupings led once again by Energy ( XLE) , Financials ( XLF) , and Materials ( XLB) took the top five and only green slots. More defensive sectors took the bottom three spots on the daily tables, with bond proxies once again taking a drubbing. The U.S. 10- Year Note paid 1.48% by the end of the regular session in New York, up from 1.46% earlier, but well below the high yield (low price) of 1.51% that was seen earlier in the day.
Winners beat losers by something close to 4 to 3 at the NYSE, by close to 5 to 3 at the Nasdaq, despite the performance of the headline indexes.
Advancing volume bested declining volume for NYSE names by almost three to one, and for Nasdaq names by a similar margin.
You may have expected such strong performance for stocks residing at the Big Board given the concentration of value-type stocks listed there, but if surprised by the strong performance at the Nasdaq, remember that even though the big tech names dominate the large-cap Nasdaq equity indexes, that the midtown exchange also lists the vast majority of smaller stocks and small stocks put in a spectacular day.

It's Just The Beast Under Your Bed
In Your Closet, In Your Head
--Hammett (Metallica) 1991
You were watching the Dallas Cowboys handle the Philadelphia Eagles, or maybe it was something mindless on Netflix ( NFLX) . Maybe you were doing some chartwork. Maybe you simply read for pleasure. At some point you turned in for the night. You turned off the lights.
Traders in Asia (and maybe a hedge fund or three) sold U.S. Treasuries and then sold some more. Early rising European traders (and maybe a hedge fund or three) sold European equities and U.S. equity index futures alongside. The echoes of deep laughter filled the forest, funneled out through doorways leading to a grand banquet hall. Thousands of mighty warriors told tales of valor, and for a stretch, the yields of both the U.S. 10-Year Note and U.S. 30-Year Bond tacked on about a full basis point per hour. Ale meant to be enjoyed by the fearless, recklessly spilled onto the floor, a floor sought for by equity index futures.
For it would be splendid if yields were rising because the economy had roared its spine-tingling cry and all kneeled before the monarch. August Durable Goods Orders had indeed been impressive at the headline, as well as ex-defense for that matter. Ex-transportation? Hmm... not so much. No. Yields were speeding in the fast lane because our legislators were still playing games ahead of the quasi-deadline where the federal government runs out of allowance money at zero dark-thirty on Friday morning.
Senate Democrats tried late on Monday to couple funding the government through Dec. 3 with suspending the debt ceiling through Dec. 16. Senate Republicans, as expected, blocked the effort in the hopes that the left decouples the short-term spending measure from the debt limit. This is by no means surprising, but algorithms will be algorithms.
Treasuries from the 3-Year Note on out to the deep end, as well as equity index futures have had a rough overnight. Treasury markets appear to have found some support at around 04:30 ET after the 10-Year bottomed out just under 1.55%.
Now, it is up to you, my warrior brothers and sisters. Take thy sheath by the hand, but stop right there... and think prior to allowing cold hard, beautiful steel to glisten in the sun. Think prior to wading into massed conflict.

This is all just fun and games for now. Nothing really counts until the scoreboard reads "final,'' and we are nowhere close to that. Nancy Pelosi and Mitch McConnell have plenty more up their sleeves in terms of gamesmanship. The appearance of having gained the upper hand is more important to them than is your P/L ratio. There really is no way to predict what equities would do in a temporary default situation even if one came to pass. No one believes that the U.S. government will not service its debt and live to pile on more of that debt. Even if a credit downgrade is out there lurking. A great big "so what."
Which brings me to my next point. Yes, the central bank appears to want to get out of the market participation business. Yes, there is consumer-level inflation. Just keep in mind that there are going to be large spending packages passed, and some of it will likely pass this week. Who knows when the larger, scarier spending package will pass, or how big it will be when it does. Chances are that the U.S. Treasury will in the future have to lean on the "independent" Fed to help finance future spending. Expecting taxpayers to carry the ball on every play will tire the halfback, and kill economic growth in the cradle.
You may want to sell Treasuries. You may want to sell "growthy" type stocks. You may also want to wait -- until you see the whites of their eyes. The BLS goes to the tape with September payrolls a week from Friday. The big banks start to report the following week. We knew this week would offer anxiety. I suspect that actual macro-economic and corporate performance might just be the actual arbiter here and get the most important say in decisions impacting the trajectory of monetary policy.

Don't push me
'Cause I'm close to the edge
I'm trying not to lose my head
-- Fletcher, Mel, Chase, Robinson (Grandmaster Flash and The Furious Five) 1982
Charles Evans of the Chicago Fed said on Monday: "I'm more uneasy about us not generating enough inflation in 2023 and 2024 than the possibility that we will be living with too much."
The New York Fed's John Williams added: "As the economy gets through these highly unusual dynamics, I expect inflation to come back down to around 2% next year."
Fed Governor Lael Brainard spoke as well: "With Delta disrupting the rotation from goods to services and prolonging supply bottlenecks, it is uncertain just how fast and how much inflation will decelerate over the remainder of the year and into next year."

...  And I ran, I ran so far away
I just ran, I ran all night and day
I couldn' get away
--Maudsley, Score, Reynolds, Score (A Flock of Seagulls) 1982
Robert Kaplan has run the Dallas Fed for six years. Eric Rosengren has worked for the Boston Fed for three decades. On Monday, within hours of each other, both men retired. Rosengren, who would hit the mandatory retirement age for his position in June 2022, cited health reasons, while Kaplan actually cited the recent scrutiny over his investing in financial markets while serving in a position of leadership at the nation's central bank.
Kaplan disclosed that he personally held stakes in 27 publicly traded companies, funds and/or alternative investments worth more than $1M, while Rosengren apparently held stakes in four REITs worth $151K. It is important to point out that both men, according to available sources, had done nothing improper in regards to their trading according to the Fed's ethics guidelines, guidelines that Chair Jerome Powell has now ordered a sweeping review of.
On that note, Powell and Treasury Secretary Janet Yellen will testify today before the Senate Banking Committee as part of quarterly hearings mandated by the March 2020 emergency economic relief measures implemented by the central bank at the start of the pandemic.

... That on Monday, while Goldman Sachs ( GS) lowered the firm's global auto production forecast to reflect a tougher environment as supply chain issues drag on, it singled out Tesla ( TSLA) and General Motors ( GM) as potential outperformers in such an environment.
Tesla popped 2.2% and GM ran 1.9% on the news. However, Ford Motor ( F) , a frequently mentioned Sarge fave, not singled out by GS, scored an increase on Monday of 2.8% on news of a $7B commitment alongside South Korea's SK Innovation ($4B) to build three electric battery and vehicle plants in Kentucky and Tennessee that will employ thousands of people. Huzzah.

.. in a single bound. Raytheon Technologies ( RTX) and Northrop Grumman ( NOC) have successfully completed the first powered test flight of their scramjet air-breathing hypersonic weapon for the U.S. Air Force. Those not following the defense industry or don't concern themselves with the geopolitical might not understand how huge this is. Hypersonic weapons, by virtue of speeds at more than five times the speed of sound as well as their irregular flight paths are considered indefensible -- and can potentially be fitted with any kind of armament.
As recently as 2019, it was well understood across military communities that both China and Russia were technologically ahead of the United States in the development of these weapons. Catching up, and taking a lead here is an imperative of which there is no equal.
Lockheed Martin ( LMT) and Kratos Defense ( KTOS) are also working on the development of hypersonic weapons away from this particular project. Both the Raytheon/Northrop Grumman and Lockheed ( LMT) (which has not yet proven successful) weapons are launched from a traditional Boeing ( BA) B-52 stratofortress bomber aircraft. 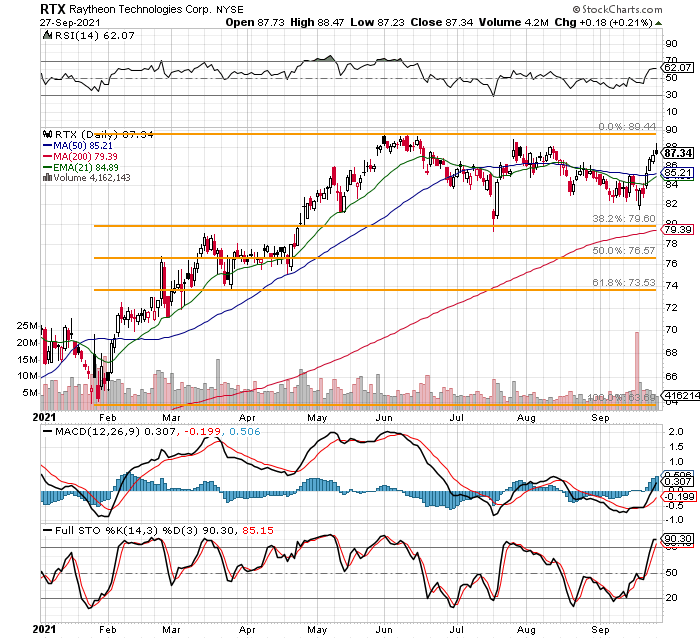 The Fed & The Treasury Department (All Times Eastern)