All the major equity indexes closed lower Tuesday with negative internals on the NYSE and Nasdaq with rising volumes, leaving all the charts still in near-term downtrends and lacking reversal signals.

However, the data is on the other side of the fence and at levels frequently seen at near-term bottoms. With that said, the data has been bullish the last few sessions as the markets continued to erode.

As such, we believe that the charts need to display a shift in the current state of supply overpowering demand. One such signal could be a violation of the downtrends that currently exist. As an example, we commented on Aug. 22 that the accelerated uptrend lines had been violated on the charts, along with some cautionary data, suggesting a correction at that time.

Should the charts violate their current downtrends, we would expect some market strength to ensue. However, these violations have yet to occur. 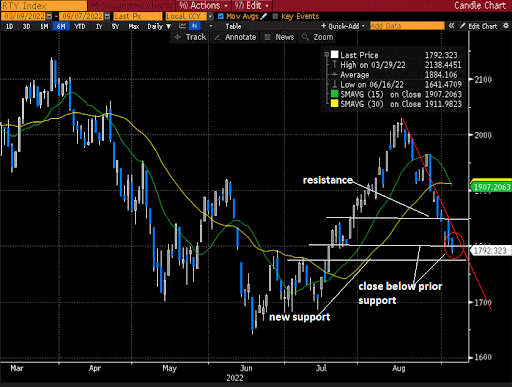 All the major equity indexes closed lower Tuesday with negative NYSE and Nasdaq internals on higher trading volume as supply stayed in control.

The MidCap 400, Russell 2000 (see above) and Value Line Arithmetic Index violated support as the others held.

As such, the charts remain in near-term downtrends that have yet to generate suggestions of a reversal of the recent weakness. In our opinion, such signals are required in order to become more optimistic.

Market cumulative breadth continued to erode as well with the advance/decline lines for the All Exchange, NYSE and Nasdaq negative and below their 50-day moving averages.

The stochastic levels remain very oversold. But, like the data, they have yet to have a positive influence stemming from bullish crossover signals.

The data continue to intensify positive signals. While we typically see positive market action commence at these levels, they have yet to exert influence.

The percentage of S&P 500 issues trading above their 50-day moving averages (contrarian indicator) dipped to 33% and remains neutral.

Insiders have increased their buying over the past several sessions, however.

This week's AAII Bear/Bull Ratio (contrarian indicator) rose to 1.57 and is now in bullish territory.

The Investors Intelligence Bear/Bull Ratio (contrary indicator) is 30.1/38.4 neutral with an increase in bears and drop in bulls.

While the data are strongly suggesting some relief, that has been the case for the past few sessions without impact. Thus, we need chart improvements to find said data actionable.