Instead of creeping higher last week, as I envisioned the market would, it had a terrific first day of trading and then leaked the remainder of the week. Yet since so many of the indicators I follow are based on breadth, there was quite a lot of movement under the hood.

First, let's discuss the Overbought/Oversold Oscillator. A week ago this was still hovering at the zero line, but look at it now, toying with the previous highs for the NYSE (Nasdaq is still a laggard, more on that below).

The way the math works out I expect the Overbought/Oversold Oscillator to get overbought around midweek this week. You see breadth has been positive for seven of the last eight trading days. If you can't remember the last time that occurred it is because we have to go all the way back to last summer for that.

Speaking of breadth, the cumulative advance/decline line made a higher high than the December high, something the (IWM) , an ETF to be long the Russell 2000, wasn't able to do. Sure, it's still at a lower high than the November high but that spread has narrowed quite a bit so that's something. I am still willing to give this until we get short-term overbought midweek to see if it can challenge that November high. Until then it is a negative divergence.

Sticking with the breadth theme, all those good breadth days have managed to get the McClellan Summation Index heading upward again. You don't even need a magnifying glass to see it. Heck, I could take my glasses off and still see the move, and I have bad eyes! It will now require a net differential of negative 2,900 advancers minus decliners on the NYSE to halt the rise. That gives this indicator a decent cushion because it would require two very bad breadth days to halt the rise. But it also makes us a little overbought already using this metric.

The number of stocks making new highs remains pathetic and I doubt that will change much. The Hi-Lo Indicator for the Nasdaq has finally lifted as well and is now at 0.25. I would say this is not overbought but it is no longer oversold. 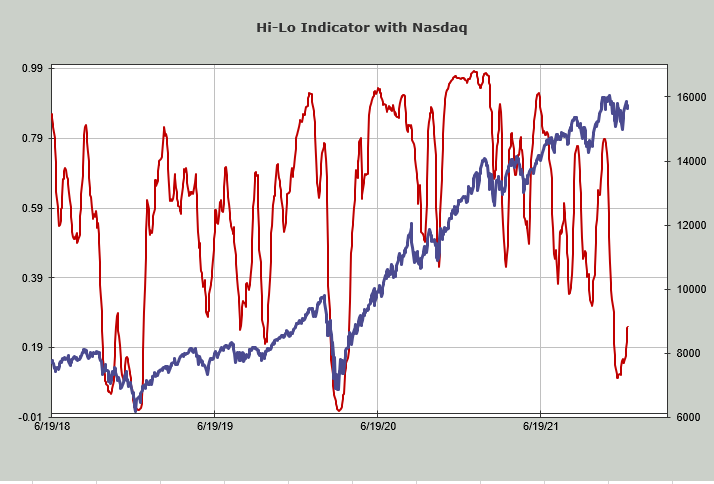 The way I see it the market did a version of Trading Places last week. The indexes withered while individual stocks held their own. For the last several months we have seen the inverse, with the indexes holding their own and rallying and the majority of stocks sitting it out.

With that in mind I'd like to show you the chart of the S&P 500 relative to the Nasdaq. You see, in the fourth quarter the Nasdaq lagged the S&P. Not by much, but notice the Nasdaq did not make a new high last week while the S&P did. And the Nasdaq was down on the week, something the S&P (even the Russell 2000) didn't do.

For the majority of 2020 the Nasdaq was the leader as you can see on the chart below. Down means Nasdaq is doing better than the S&P. But in February 2021 that came to an abrupt halt (arrow). I have noted before that I believe the internal top and the peak speculation was in that early 2021 period and this chart is another illustration of it.

You might recall the first half of 2021 did not bring much joy for the Nasdaq names and by May everyone was dismissive of them. But they came roaring back. Yet look at the chart: From that peak in May the ratio fell but did not retreat all the way to the February low. In fact, after that initial rally in June the two indexes were pretty much in lockstep the remainder of the year. Something had changed.

I would love to tell you that moving over the blue line is some magical number or level but it is not. However, if I am correct that the speculative peak was almost a year ago, this ratio ought to work its way higher over the coming months. Should that happen I think it would mean we would slowly extricate ourselves from that situation where a handful of stocks are the only thing the market indexes care about.

In the meantime, I am not particularly good at making annual predictions but I do think we are more apt to see more trading opportunities and volatility in the months ahead.

Get an email alert each time I write an article for Real Money. Click the "+Follow" next to my byline to this article.
TAGS: Indexes | Markets | Stocks | Technical Analysis | Trading | U.S. Equity