While somewhat encouraged by Tuesday's action, violations of trend to the upside have yet to appear.

Importantly, the major equity indexes managed to recover most, if not all, of their losses from a very weak open Tuesday with two charts violating resistance and three forming "hammer" signals that imply some near-term lows may have been established. However, all the near-term trends remain neutral with the intermediate-term bearish.

The data is largely neutral except for sentiment (contrarian indicator) that is at decade peaks of fear while valuation has become much more reasonable, in our opinion.

We await trend reversals to become more optimistic for the near-term. Until then, trends should be respected. 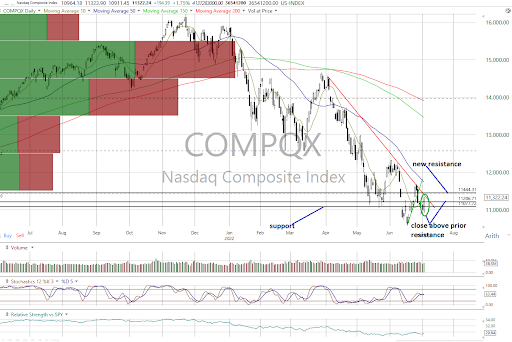 A very weak open saw enough buying interest to drive all to close near their highs of the day with the Nasdaq Composite (see above) and Nasdaq 100 closing above their near-term resistance levels.

However, there were no violations of the near-term neutral trends that remain intact on all.

Yet more encouragement came in the form of the DJIA (see below), Transports and Value Line Arithmetic Index making "hammer" formations that suggest their near-term lows may have been established.

Market breadth remains neutral for the All Exchange, NYSE and Nasdaq as all stochastic levels are neutral as well. 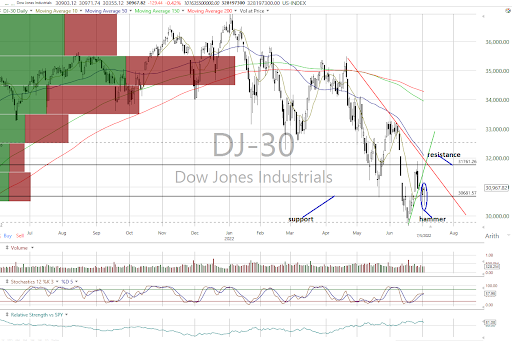 Data Largely Neutral -- Except for Sentiment

The detrended Rydex Ratio (contrarian indicator) rose to -1.95 and is now bullish versus its previous very bullish signal. Yet, these traders remain quite leveraged short.

The Investors Intelligence Bear/Bull Ratio (contrary indicator) saw a rise in bulls and drop in bears but is also very bullish at 40.0/32.9. Three times in the past decade, such readings have marked market lows, most followed by notable rallies.

While the near-term neutral and intermediate-term bearish chart trends should be respected until proven otherwise, we are encouraged by Tuesday's strong recovery that resulted in some violations of resistance as well as hammers while sentiment is near bearish extremes and valuation has become more appealing.