The charts of the major equity indexes and market breadth have yet to send a glimmer that the worst might be over. However, the data are suggesting that fear is at peak levels and pressure has built to levels that have historically been coincident with notable rallies, as discussed below.

Thus, we remain expectant of some strength returning to the markets at some point in the near-term. Chart confirmation will be required, however. One ray of hope regarding the charts, may come from the fact that the vast majority made higher intraday lows Thursday versus Monday's deep selloff lows. 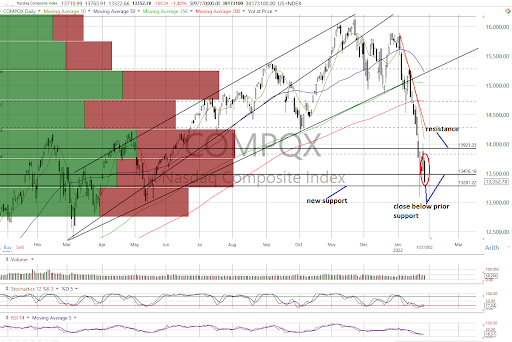 All the major equity indexes closed lower Thursday with negative internals on lighter volume on the NYSE and Nasdaq.

All closed near their lows of the day with S&P 500, Nasdaq Composite (see above), Dow Jones Transports, MidCap 400 and Value Line Arithmetic Index breaking support as all the indexes remain in near-term downtrends with no technical signs of reversal at this point.

However, some small encouragement may come from all making higher intraday lows versus the deep lows of Monday's session, except for the Dow Transports and MidCap 400.

Cumulative market breadth also has yet to show a change in the current downtrends for the All Exchange, NYSE and Nasdaq. 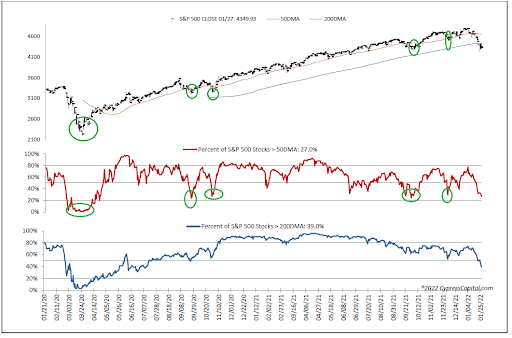 We continue to believe the data is sending strong signals that a notable rally may be forthcoming as said data increase in pressure.

The percentage of S&P 500 issues trading above their 50-day moving averages dipped to 27% and is still at levels coincident with correction lows (see above).

The Open Insider Buy/Sell Ratio (see below) jumped further to 109 and near levels preceding rallies since 2017. On January 1, it was 31.

In contrast, the detrended Rydex Ratio (contrarian indicator), measuring the action of the leveraged ETF traders, is at 0.29 versus its bearish reading of 1.24 on Jan. 1. They have been dumping stock.

The Open Insider Buy/Sell Ratio Is 109.0 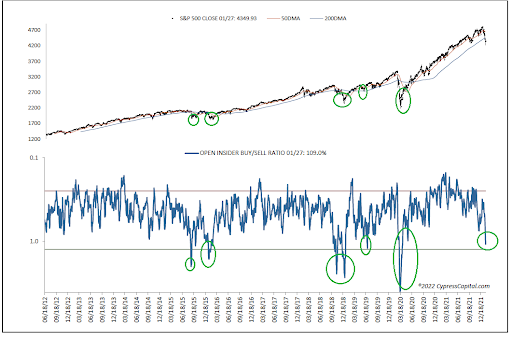 While the charts and breadth remain awful, the data continues to build up pressure for a notable upside reversal, in our opinion.