Tuesday a prominent FOREX analyst referred to being long the dollar as the "easiest trade in FX." He added, "Until there's a dramatic shift in fundamentals and rhetoric with the Fed, you'd definitely be foolish to sell the dollar when the whole world is so nervous."

This view has been true in recent months; the dollar has benefited from a hawkish Federal Reserve (quick and aggressive interest-rate hikes) and a weaker European economy. However, regardless of the trend in price and fundamentals, there is no such thing as a free lunch and referring to any trade as "easy" feels irresponsible.

For instance, it wasn't that long ago the masses assumed being short the dollar was the "easy" trade. In January 2021, the U.S. dollar index, traded on the ICE exchange, was trading near 90.00 and the world was bearish due to aggressive money printing and loose monetary policy. Very few gave the dollar a chance at avoiding Armageddon, let alone rallying deep into the 100.00s!

In short, we should never take things for granted. Further, bandwagon sentiment is not permanent. According to the Bullish Consensus Index, only 28ish% of market professionals polled are bullish on the euro against the dollar and almost 70% are bullish on the U.S. dollar. This is the mirror image of what we saw in early 2021 before a trend reversal.

Of course, even if the long dollar trade is overcrowded and nearing an end, there are no guarantees when and where that turnaround might occur. Yet, we can look to the chart to make an educated guess.

Sentiment readings, as well as the Commitments of Traders Report, suggest the market is "bulled up." This this leaves traders vulnerable to a reversal because even the sharpest of uptrends eventually run out of buyers.

We think that the inflection point could be near recent highs at about 109.00, but if the Jackson Hole symposium adds fuel to the fire, the last hurrah rally to multi-year trendline resistance is possible. That would put prices closer to 113.00!

While we aren't counting on that to occur, it is a possibility. In any case, the upside is most likely limited from here.

One of the most compelling bearish cases that can be made based on the weekly chart of the dollar index futures contract is the divergence in oscillators from market prices. Specifically, as the DX future makes new highs, or retests recent highs, the RSI (Relative Strength Index) fails to follow. This is often a precursor to a large price reversal.

Another factor that tends to be overlooked is currency market seasonality. Again, this isn't a holy grail and can sometimes be late, early, misleading, or all of the above. Yet, as a rule of thumb, it is generally a clever idea not to go against the seasonal norm.

In the case of the U.S. dollar, the currency is apt to experience weakness from early July through early October. This is based on data compiled over the last 30 years. It should be noted that data dating back only five years is slightly bullish for the greenback during this period. 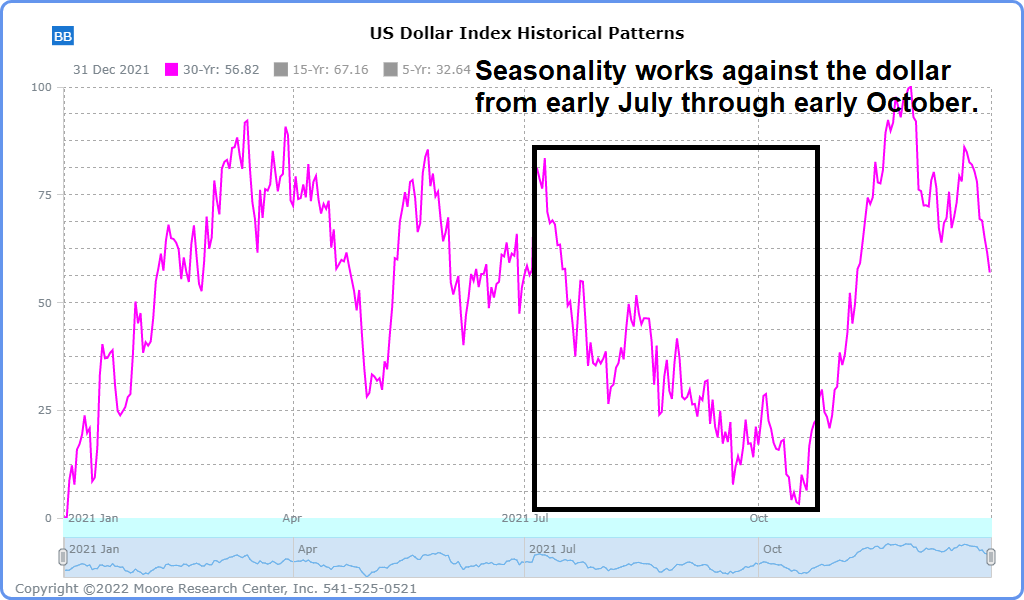 The currency market has been diligently pricing in a U.S. dollar interest rate differential, a better domestic economy, and a flight to quality as the rest of the world struggles to get a handle on stagflation. Yet eventually there will be a time and place in which the market moves on to the next story.

According to the chart, above, that is somewhere between 109.00 and 113.00 in the U.S. dollar index futures contract. Stay safe!

Get an email alert each time I write an article for Real Money. Click the "+Follow" next to my byline to this article.
TAGS: Currencies | Federal Reserve | FOREX | Futures | Markets | Technical Analysis | Trading

Crude Oil's Next Move Is to the Upside as Dollar Weakens

A weaker dollar is likely to put a bid under oil prices.

Traders Get It Wrong With Central Bank Call in Japan

Japanese equities rallied and the yen suddenly sold off as punters who predicted the end of easy money in Japan had their fingers singed.

Has the U.S. Dollar Index Peaked? Time to Revisit My Thoughts

I am increasingly accepting of the idea that we are witnessing the end of fiat currencies and the beginning of commodity-backed currencies.

Check out these five currency plays, four of them in Asia, as ways to make the most of the weakening U.S. dollar and greater interest in emerging-market stocks.