Let's talk about what has transpired in the market in the last month.

We moved from complacent to almost giddy as the Investors Intelligence bulls finally nudged themselves up and over 55%. We saw the put/call ratio for equities sink to 52% on May 3, keeping the 10-day moving average low. We saw the Citigroup Panic/Euphoria Model kiss euphoria.

We saw articles telling us not to sell in May (and go away). We saw not one, but two or more Wall Street firms calling for a melt up, after we were already up 20%.

We also saw the number of stocks making new highs contract, despite the higher highs in the major indexes. We saw the McClellan Summation Index turn down from a lower high and we saw the market get overbought. Then last week arrived, the first full week of May, and the market went down.

Now the sentiment has gone from complacent to almost fearful. I say almost, because I don't think we got any real panic, but we've gotten a huge change in sentiment. It emerged Wednesday when the total put/call ratio surged to 120%. Since then we've had three consecutive readings over 120%, which is not terribly common, especially in a market that is only down 2% or 3%.

Friday's equity put/call ratio surged to 80%, a reading not seen since we were near the lows in December. Readings of 97%, 91% and 113% for this indicator came over the course of the five days beginning Dec. 17. So one high reading can turn into more, but that shows the massive sentiment shift in just one week.

Friday we also saw the S&P 500 fill that gap I noted on the chart last Wednesday. While I would not base my market view on an index filling a gap, when it happens when sentiment is getting scared, I think it matters more.

In addition Friday's S&P 500 made a lower low than Thursday. But fewer stocks made new lows on that whoosh down to fill the gap -- the first such minor positive divergence we've seen in this decline.

Then there is the oversold condition. Some measures got oversold Friday, and I have a few more that will get oversold by the middle of this coming week. Friday we saw the 10-day moving average for Nasdaq's TRIN -- or Trading Index -- and how high it was. Now look at the one for the New York Stock Exchange with a chart of the S&P 500.

The TRIN is a calculation using two breadth measures: the advance/decline line and up/down volume. A high reading tells us there has been a lot of selling, thus a high reading in the 10-day moving average is considered "oversold." It's getting up near the level it has reversed from over the last year. Yes I know the peak in December was mid month not at the low, but I think this shows you how extreme it's gotten now. 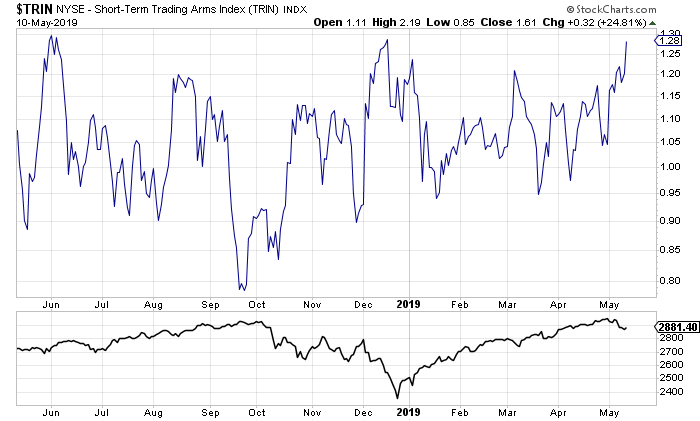 One final note, the put/call ratio for the Volatility Index has been over 100% three times in the last month, which is quite unusual. It was 111% on Friday. I think that means we are not done with the volatility, there should be more of it. But I do think that we have an oversold condition and negative sentiment, which ought to lead to a rally, especially if we see the market back off early in the week.

Get an email alert each time I write an article for Real Money. Click the "+Follow" next to my byline to this article.
TAGS: Currencies | Markets | Technical Analysis |

2 Charts That Shouldn't Be Ignored

They are the charts of the S&P 500 and U.S. dollar, and their patterns could influence most stocks, commodities and currencies.

We must see equity markets, the Nasdaq Composite and Nasdaq 100 in particular, fight back this week to keep on believing in this market.

What Did the Fed Really Tell Us at Jackson Hole - Implications for the Dollar?

The true question is, is there even another currency that can replace the dollar? Not really.