Looking at the individual stock charts shows that the market has separated into the haves and the have-nots. The haves were up - and not just by a little - and the have-nots were barely up at all. I can think of two other markets where this segregation persisted for months on end: the late 1990s and 2014-2015. Should this persist, we'll look out for any similarities in the indicators.

For now, however, the S&P 500 ran smack into resistance, but remains oversold. If the market comes back down, it still looks like we'll rally again. That will be the case until we work off that oversold condition and get back to overbought. My best calculation on when we get overbought is about a week from now.

Anecdotally we heard the shift in sentiment on Thursday. For the first three days of the week all I heard were calls for the S&P 500 to come down to 2600-2650 or to tag its 200-day moving average line. There was none of that talk on Thursday.

But the put/call ratio was still over 100%, making that seven-straight days of readings over 100%. To put that in perspective, the streak of triple digit readings lasted 10 days in December.

We saw the biggest shift in the American Association of Individual Investors weekly survey. The bulls fell 13 points to 29.8%, the lowest reading since December when they numbered 24.9%. The bears shot up 16 points to 39.3%, which is still far under the 50% we saw in December, but reveals the huge shift in sentiment in just one week. That's why I say this particular survey jumps around like a bunch of day traders, not investors. 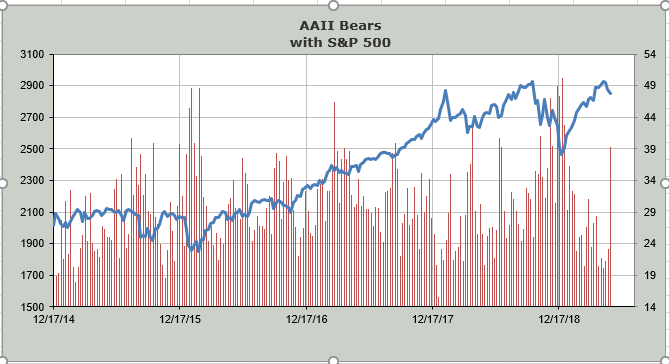 Now for some good news during the rally. Despite that so many stocks feel like they are left out, the number of stocks making new highs on the New York Stock Exchange increased to 176, which is the most we've seen since May 1, when 206 made new highs. That's impressive.

Nasdaq also saw an increase, to 117. The peak reading for Nasdaq remains 160 back in February, but the increase is a plus.

Finally, the McClellan Summation Index is still heading down. But it now needs a net differential of +200 advancers minus decliners on the NYSE to halt the decline. That is the smallest requirement since April 16.

Get an email alert each time I write an article for Real Money. Click the "+Follow" next to my byline to this article.
TAGS: Currencies | Markets | Technical Analysis |

Want to Survive This Crisis? Look at the Big Picture

You should start thinking now about inflation and what the recovery will look like to figure out how to invest wisely.

The world's 4th largest population has under 2,000 confirmed coronavirus cases. Yet the Indonesian rupiah has breached 16,000, a level not seen since the Asian financial crisis over 20 years ago.

I'll stick to the three-pronged approach... the Rebound group, the Virus group, and the Revenue group.

Kass: All Problems Cannot Be Solved With Monetary Policy

The near universal faith in central bank liquidity's ability to buoy stocks may be unjustified in the face of weakening fundamentals.