By STEPHEN GUILFOYLE Sep 13, 2022 | 07:14 AM EDT
Stocks quotes in this article: CNM, GS, INTC, AAPL
Last week, many of our major and minor equity indexes put a three-week losing streak to bed. On Monday, all of these same equity indexes posted a fourth consecutive winning session.
For the most part, these last four sessions have not just been green, but decisively green. All 11 S&P sector-select SPDR ETFs shaded green on Monday, as they had on Friday. All 11 were green for last week. Cyclicals have generally outperformed defensives. It's as if after taking what was a multi-week beatdown, equities have become comfortable with a repriced Treasury yield curve. Either that, or it really is all about dollar valuations.
On Friday, the S&P 500 took back both it's 21-day exponential moving average (EMA) and 50-day simple moving average (SMA): 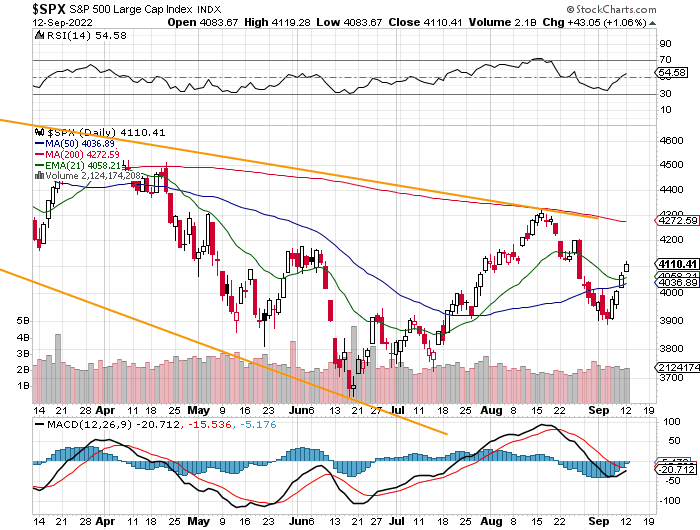 Note how this index not only retook those two lines, but that while the all-important 20 day SMA continues to trend lower, that the nearly as important 50-day SMA has been trending higher since very late July. 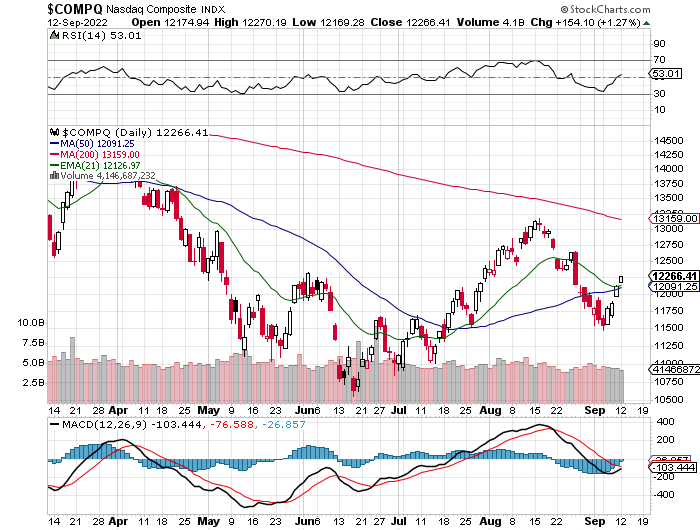 Pretty much the same story with the Nasdaq Composite (see above), with the exception that the upturn for the 50-day SMA started about two weeks earlier. Both indexes put "air" in between the last sale and those two moving averages on Monday, and both bear daily Moving Average Convergence Divergences (MACDs) that appear to be setting up for a bullish crossover.
Quite the setup. Except, and I feel that I am starting to sound like the boy who cried "wolf" here, the trading volume remains that missing ingredient that prevents me from confirming this rally as the "real thing."
I can only hope that once the August CPI drops that portfolio managers across the industry will act rather than watch and for me, from a selfish perspective, open the door to what comes next. I have no worries about missing the start of a change in trend because I was being "cashy." Should I see the confirmation I need, in less than a week's time, I won't even remember that I was late to jump on board. However, if I jump on board without confirmation and get burned? Well, that sticks with me.
Note that on both charts, over recent days/weeks that trading volume on "up" days has trended lower. Monday was no exception. Trading volume decreased 5% day over day at the Nasdaq and by just a smidge at the NYSE. The last time S&P 500 trading volume reached the 50-day trading volume for that index was on August 31. The last time it did so on an "up" day was on July 29. Similarly, Nasdaq Composite trading volume last reached its 50-day trading volume SMA last on August 31, and last reached that moving average on an "up" day on August 4.
Say what you want, but as convincing as this rally has been, with the S&P 500 up 5.76% and the Nasdaq Composite up 6.93% since bottoming early last week, Wall Street in aggregate, has not joined the party en masse.

... or at least I think it will.
The reason that professional money has been so quiet is that few were willing to move out of cash in size ahead of this morning's August CPI report to be released by the Bureau of Labor Statistics. That report drops at 08:30 ET this morning.
Expectations are that falling gasoline prices will drag the headline month-over-month print down to -0.1% from July's 0.0%, for a second consecutive month of literally no aggregate consumer-level inflation. As far as the year-over-year print, headline inflation is seen decelerating from 8.5% in July to 8.1%. That probably is not a quick enough cooling of the pace of annual growth to knock any of the massed group hawkishness out of the Fed, as they have been quite blunt in their rhetoric.
As for core inflation, the month-over-month print is seen running at 0.3% for a second consecutive month, while the year-over-year numbers are seen accelerating from July 5.9% to 6.1%. The FOMC will likely be able to focus on core inflation despite falling public inflation expectations in order to keep their narrative alive, as their intent has been clearly telegraphed and is far more discernible for those outside of the committee than is their collective reason why.
Why be so aggressive? Why not slow down the pace of tightening on the short end while allowing the quantitative tightening program to work alongside the rate hikes already implemented but still months away from impacting the Main Street economy? Those are my "whys."
I mean with two quarters of negative real economic growth in the books already and the third quarter, according to the Atlanta Fed's model running at paltry growth of 1.3%, and with the rest of the planet in even worse shape, we are skating as a nation, on some pretty thin ice. Regardless, I see that futures markets trading in Chicago are currently pricing in an 86% probability for a 75 basis point hike (to the target range for the fed funds rate) next week, and an 88% probability for at least another 50 bps on November 2.
What will be truly interesting next week will be the FOMC's updated economic projections. In June, the median expectation for 2022 GDP was for growth of 1.7% (down from 2.8% in March). Does anyone realize how gangbusters the economy would have to grow in Q4 after two quarters in the hole, and a third at 1.3% to end the year at 1.7%? (You'd need to approach annualized growth of something like 7% to 7.5%.)
Hey, for now, I'll just take a directional nod from aggregate trading volume. Not a lot to ask.

On Monday, the New York Times reported that elite investment banking outfit Goldman Sachs ( GS) in reflection of the slowdown in deal making up and down Wall Street, will implement a round of layoffs over coming weeks that is expected to cost hundreds of employees their jobs. Goldman, in a typical year, culls the herd, letting underperforming central bankers go, but had halted the practice during the pandemic. The Financial Times had previously reported that Goldman Sachs has stopped replacing departing bankers.
One thing Wall Streeters know is that investment banks don't act alone. If Goldman is handing out the pink slips this year, almost everyone else will follow suit. Just in time for the holidays. Not a positive for New York City.

On Monday morning I penned a piece for Real Money discussing the current state of affairs for the semiconductor industry as the Ffderal government  throws money at the group, while also restricting sales to China. By the end of the piece, I had suggested that at these valuations that perhaps it was time to give Intel ( INTC) , which has performed awfully of late, another look, given its payout and the quality of its balance sheet.
I have not yet acted on that initiation. Bloomberg News reported on Monday afternoon that Intel now is scaling back expectations for the Mobileye IPO. Unidentified people supposedly in the know are saying that the firm now expects valuations for Mobileye to potentially drop to a rough $30B. Readers may recall that this IPO had been expected to launch at some time around the middle of 2022 (it's already September) and that the deal could value Mobileye for as much as $50B.
Does Intel even move forward with a devalued Mobileye deal? In this environment, where the demand for new issues clearly is just not there (see Goldman above)? Mobileye, for those not in the know, was an independent Israeli semiconductor manufacturer known for its high-quality products with a focus on providing chips for cameras and autonomous vehicles. Intel acquired the company in 2017 with an eye on that autonomous driving business. CEO Pat Gelsinger would like to tap into Mobileye's value with a partial spinoff as Intel expands into the chip foundry business that Gelsinger envisions.
The company has said nothing. Prior to investing anything substantial in the name, though I will trade anything, I would love to hear from the firm, Hopefully well before we get into the later part of the year. 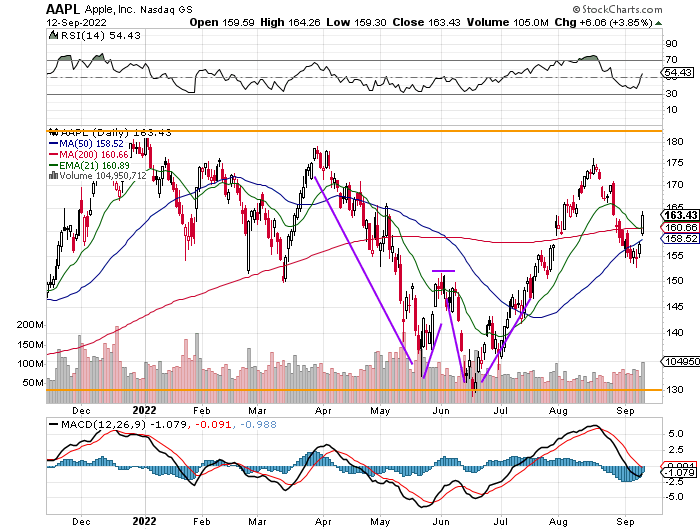 Readers may recall that almost a month ago we discussed (when AAPL was trading higher than it is now) that working off of that $152 pivot we would have a target price of $182. Readers will see that AAPL actually found support at our pivot in September and now has made significant technical progress.

On Monday, Wedbush "celebrity" analyst Dan Ives (who has an "outperform" rating on AAPL with a $220 target) made note of delivery times for iPhone 14 Pro models being pushed out into mid-October. Ives says, "So far demand and orders for iPhone 14 are tracking slightly ahead of iPhone 13 and are tracking ahead of our expectations out of the gate." Ives also stated that Apple's initial order for 90M iPhone 14's has held despite the weakening global economy and he sees Apple selling at least 220M iPhones in fiscal 2023.

Get an email alert each time I write an article for Real Money. Click the "+Follow" next to my byline to this article.
TAGS: Economic Data | Economy | Federal Reserve | Indexes | Investing | Jobs | Markets | Rates and Bonds | Stocks | Trading | U.S. Equity