By STEPHEN GUILFOYLE Oct 13, 2022 | 07:16 AM EDT
Stocks quotes in this article: BLK, DAL, DPZ, FAST, PGR, TSM, WBA, XLU, XLRE, MRNA, MRK
The wait is over.
Seems like we say that too often.
This time, the macroeconomic data-point that is currently "the most focused upon piece of information ever" that traders, investors, economists and the general public are geared up for, will be this morning's BLS (Bureau of Labor Statistics) September release of CPI (Consumer Price Index) data. Headline September CPI is expected to print up 0.1% from August. August printed flat from July. From a month-over-month perspective, headline CPI would appear to be slowing. This comes after headline CPI had printed up 1.0% or greater on a month-over-month basis for three out of four months prior to July.
This would place year-over-year CPI at +8.1% for September, which would be the third consecutively lower month for this series after apexing at +9.1% in June. Of course, that includes everything, including gasoline, heating fuel and food, which are things that monetary policy no matter how tight really can effectively impact, which is why the Fed is more likely to focus on core inflation. The core omits those volatile items that everyone needs, but by doing so, ends up placing more of a focus on what is known as "sticky" items such as shelter or medical services that fluctuate less, meaning that once they rise in price, it is much more difficult and it takes longer to bring them back down. Shelter, for example, accounts for almost one-third of headline CPI (32%) and has an even greater impact upon core CPI.
Consensus view is for core CPI to have increased 0.4% month over month for September, which though a deceleration from August's 0.6% print, would still be seen on the "hot" side. Unfortunately, year-over-year core September CPI will likely print red hot, and this may be the number that committee (FOMC) members focus on in order to justify their relentless intent to rapidly raise short-term interest rates, despite being unable to ascertain the impacts of such aggressive policy on U.S. households in real time.
Year-over-year CPI is seen hitting the tape at 6.5% at 08:30 ET. This is within a range of expectations that spans from 6.4% to 6.6%. A print of 6.5% would be the second consecutive month that this particular data-point would be moving in the wrong direction since back-to-back 5.9% prints for June and July. A 6.5% print would also equal the pace of growth seen in March, which until now had been the month that inflation had supposedly peaked. A 6.6% print would be a new high for the cycle and provoke an even more aggressive response from a Fed that appears to be growing more and more frustrated. A 6.6% print would also likely cause more risk-off behavior across financial markets.
Not that the two series walk hand in hand, they usually do not, but September PPI (producer/wholesale price index) hit the tape hotter than expected at the headline and more or less in line with consensus at the core.

The Federal Reserve released the Minutes from the policy meeting that culminated on September 21. There were no hidden gems within that would convince me that the FOMC is any less convinced that policy must remain on the intense trajectory currently being deployed.
The quote from those Minutes that made the media rounds last night states, "Many participants emphasized that the cost of taking too little action to bring down inflation likely outweighed the cost of taking too much action." According to the Minutes, some officials also warned that the longer inflation remains elevated, the greater the risk that expectations of future upward price pressures get out of control, which would lead to a damaging feedback loop. This is a theory that the Fed has clung to throughout, despite there being nothing reflective of this concept in statistical or even surveyed reality as of yet for this cycle.
Going into Thursday morning's CPI release, Fed Funds futures markets trading in Chicago are pricing in an 81% probability for another 75 basis point rate hike on November 2, and an 89% probability for at least a 50 bps rate hike on December 14. At this point a cycle high Fed Funds Rate of 4.5% to 4.75% is priced in by February 1, 2023. That said, there is a significant minority probability (44%) that another rate hike is to be implemented on top of that level in March.

Anyone Else Notice This?

Foreign accounts have stopped buying U.S. Treasury securities. Does that eventually soften the U.S. dollar?
On Wednesday afternoon, the U.S. Treasury Department raffled off $32B worth of 10-Year paper. Demand was lackluster to say the least. A high yield of 3.93% was awarded, which tailed (1.6 bps) the active secondary market badly on a bid to cover (2.34) that was below average. This was the seventh 10-Year Note auction in the last eight that tailed the active market.
Worse than that, indirect bidders (largely foreign accounts) took down just 56.8% of the issue, down from 62.3% in September and well below the 66% or so that Indirects have been averaging for some time now. Directs took down 23.5% of this issuance, which was the most for that group since early 2014. Primary dealers were left with the balance (19.7%).
We'll learn more on Thursday afternoon as the U.S. Treasury goes to market with $18B worth of shiny new 30-year bonds.

U.S. stock markets were rather quiet on the Wednesday ahead of September CPI. While both the S&P 500 and Nasdaq Composite posted their sixth consecutive "down" session on Wednesday, both of these major indexes posted what we call "inside days."

Note that trading that for the U.S. stock market's two major indexes the trading range for Wednesday resided within the trading range on Tuesday. All on decreased trading volume, too. These are signs of reduced volatility, and often signal a continuance of trend. While I think we all would appreciate a reduction in volatility, I don't think too many folks with invested retirement funds are looking forward to a continuance of trend.
That said, there was a positive takeaways from Wednesday's trading data. Yes, eight of the 11 S&P sector-select SPDR ETFs traded lower, interestingly led by Utilities ( XLU) and the REITs ( XLRE) , which were down 3.33% and 1.33%, respectively, and losers did beat winners, but not in a rout. Loses beat winners by roughly 5 to 3 at the NYSE and only by 8 to 7 at the Nasdaq Market Site.
Now, here's where it gets a little fun.
You already know that trading volumes dropped significantly on Wednesday from Tuesday. However, advancing volume took a 45.4% share of composite NYSE-listed trade, which is way above recent norms, and this is the kicker: advancing volume took a 53.2% share of composite Nasdaq-listed trade.
Is the next bear market rally just around the corner? The CPI will let us know that. The indexes in general, are very close to being technically oversold once again.

Moderna ( MRNA) ran $10 on Wednesday, gaining 8.28% for the session after news broke that Merck ( MRK) had picked up an option to collaborate with the company on developing a messenger RNA personalized cancer vaccine.
Take a look at this: 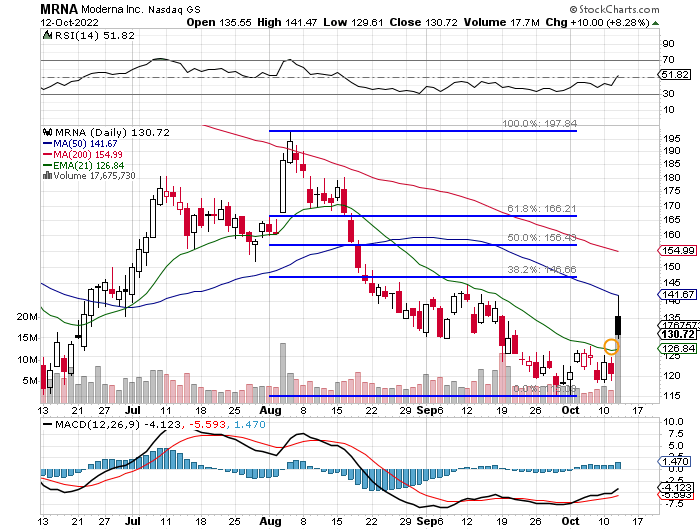 Ever have one of those friends that puts on a shock collar and tries to run through an invisible electric fence? Yeah, that was Moderna yesterday morning at its 50-day simple moving average ($141.67).
Here's how it looked in real-time:

ZAP! Guess we know where resistance is.