Crude oil speculators have remained long in the oil market for several years. Even through the Covid calamity that drove prices below zero, the oil market has been dominated by bullish speculative holdings.

The Russian invasion of Ukraine provided windfall profits to those who had accumulated long positions leading up to the event. Still, buyers that were late to the party likely sustained painful losses.

However, in recent months, speculators have been slowly liquidating their long positions to bring their bullish position to the smallest seen in at least five years.

According to the COT Report (Commitments of Traders) issued by the CFTC (Commodity Futures Trading Commission) as of last Tuesday, large speculators were net long about 230,000 futures contracts. To put this in perspective, in 2018, speculators were holding as much as 700,000 net long contracts; in 2021, we saw net long large speculator positions as high as 600,000 contracts, and earlier this year, they were holding nearly 400,000 contracts (about double the current position). Accordingly, some call the $60.00 selloff from this year's highs a "speculator liquidation event."

Ironically, the fact that speculators have thrown in the towel on the crude oil bull market is, in itself, a bullish development.

The most recent comparable speculative net long position occurred in 2016. This group of speculators was net long, roughly 200,000 contracts. On that occasion, oil futures rallied from the low-$30.00s to the high of $70.00s before rolling back over. Accordingly, it seems probable that most of the liquidation in oil could be behind us. If so, speculators should have plenty of cash to employ toward new long futures positions should price action reverse as expected.

In other words, those who are out of the market wishing they were in will be pressured to buy futures to reestablish their liquidated position -- also known as Fear of Missing Out (FOMO) buying. This should fuel a potential rally of as much as $20.00 to $25.00 per barrel. 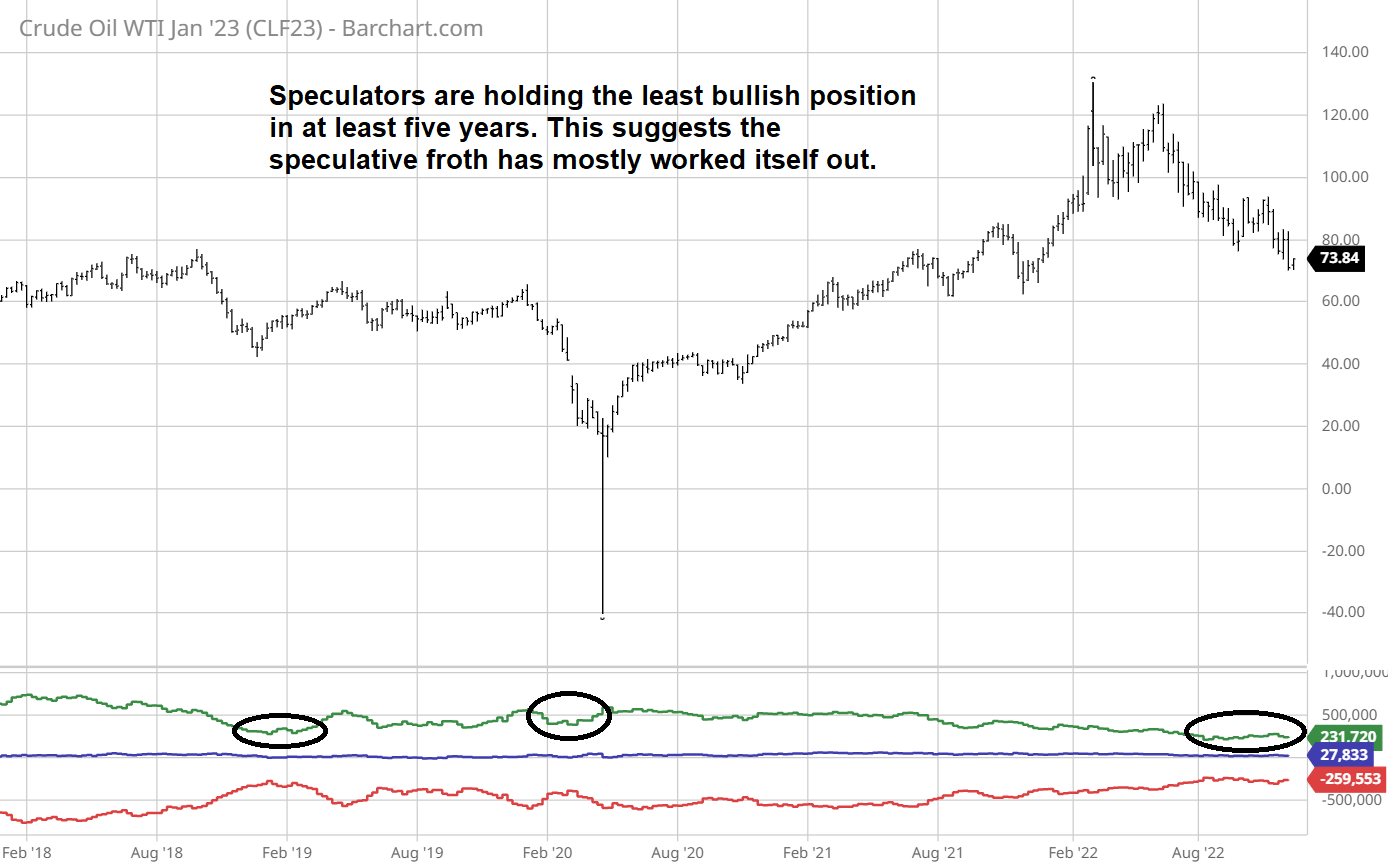 If it weren't for two consecutive black swan events hitting the oil market, we would have likely seen the price of crude oil slowly trade higher in a channel that began in late 2019 and extended through to today. According to the weekly chart of oil futures and the aforementioned channel, the nascent stages of the trading pattern produced resistance estimated to be $65.00 and support near $40.00. Over time, the progression of what appears to be the natural uptrend has led to channel resistance near $95.00 and support at $70.00.

As we've witnessed in March 2020 and March 2022, the oil market sometimes treats these technical levels as suggestions rather than rules. Nevertheless, it took multiple highly unusual events and market panic to stray from the pattern. We've pointed this trading channel out on numerous occasions this year as prices were descending back into the channel in the mid-to-low-$90s. We are currently approaching the channel's lower level ($70.00) and believe this level, or moderately below, will act as a floor.

It is also worth noting on the weekly chart that the 200-week moving average lands at $65.00. In light of thinly traded holiday markets, lines get blurred, and things get messy; thus, a quick probe to $65.00 is a relatively reasonable prospect. In any case, the weekly chart suggests a high probability of the oil market turning the corner somewhere near $70.00 and $65.00 per barrel.

Lastly, the RSI (Relative Strength Index) on a weekly basis declined to 35.00 in September, suggesting a mildly oversold market. Still, thus far, the December selloff has resulted in an RSI reading of just 37.00. Failure of the RSI to make a new low along with a new low in futures prices is often a sign that selling is starting to dry up, and a trend reversal is more probable.

Moving to the daily chart, we see similar support and resistance levels marked by a completely different downtrend channel. Some assume it to be evident that the same technical levels derived from the weekly chart would show themselves on the daily chart, but that is not always the case. When it is, however, it is a sign that the levels are more reliable.

Like the weekly chart, the daily chart suggests $70.00 is significant support. We also see the $65.00 support level from the 200-week moving average support aligning with a significant pivot price on the daily chart where the previous rally started in late 2021.

Similarly, the daily chart points out resistance near $95.00, but we also see a downtrend channel resistance near $88.00. Accordingly, if we are right about a rally, it will likely stumble somewhere between these two levels, but a break above $95.00 would make way for a massive rally to $105.00. We aren't expecting this to occur due to the natural channel we pointed out on the weekly chart, but it should be noted as a possibility if a significant fundamental change occurs.

Unlike the weekly chart in which the RSI fell short of 30.00 (30.00 is considered the line in the sand that indicates an oversold market), the daily chart met it. In the past, such RSI readings were followed by rallies. This occurred in August and November 2021 and September 2022. The first two occasions produced $20.00 rallies; the latter was among the largest rallies in history; it started in the low-$60.00s and finally completed near $130.00 per barrel!

In our view, the charts suggest the best trades will be for those looking to get bullish on dips rather than selling the rips, at least for the time being. If so, the rally could produce a $20.00 to $25.00 premium to the current pricing, but we can't rule out more if something miraculous occurs on the fundamental front.

Get an email alert each time I write an article for Real Money. Click the "+Follow" next to my byline to this article.
TAGS: Commodities | Futures | Markets | Oil | Technical Analysis | Trading | U.S. Equity

Plus, a look at Wednesday's wishy-washy market action, the Treasury yield curve, Chevron's coming earnings and Lael Brainard's possible exit from the Fed.

Why Are Insiders Buying These 2 Stocks?

An oncology and a oil & gas concern, new names on my list, have my attention.