I worked for a commodity consulting firm from 1973 to 1976. This was my first job out of university. I learned about the supply and demand for everything from cotton and live cattle to soybeans and zinc.

I learned about supply/demand tables, yields per acre, fundamental analysis, quantitative analysis and technical analysis. It shaped my thinking about the markets in a way that has influenced me the past 49 years.
In the 1970s inflation was driven by a number of supply shocks and a program in Washington of guns and butter. In the '70s and '80s there was a path to more supply and it was higher prices. Higher prices eventually produced more supply. More supply took planting more crops, using more fertilizer, raising more cattle, opening new mines in far-off lands and drilling for more oil in harsher environments. Eventually commodity prices were tame for decades and "just in time inventory" became wildly popular.
Over the years this link of high prices and more supply got broken. Oil prices and other commodities such as copper soared in price but CEOs got burned when prices quickly changed direction as deflation became ingrained.
Another issue has grown quietly in the past 20 years. There are now 1.6 billion more people on the planet since 2000.
Along with this global population growth we are seeing a huge growth in the middle class. By 1975 the middle class had reached 1 billion people. By 2006, another 1 billion had joined the middle class, and now less than a decade later, we are at 3 billion. The middle class could surpass 4 billion this year, making it a majority of the world's population according to data from the U.N.
Supply shocks are now being met with insatiable demand. Millions, no billions of people have moved away from rice and tofu to chicken and beef and fish, which take more resources to produce. People have moved away from bicycles to mopeds to little cars to big SUVs. All of these things take more stuff to produce. This level of demand did not exist in the 1970s but it is a clear and present issue today.
And let's add in the fact that U.S. farmland under cultivation has been going down in the world's breadbasket from 945,080,000 acres in the U.S. in 2000 to 896,600,000 in 2021.

In my early commodity days I learned that corn grain yield improvement began in the mid-1950s in response to continued improvements in genetic yield potential and stress tolerance plus increased adoption of nitrogen fertilizer, chemical pesticides, agricultural mechanization, and overall improved soil and crop management practices.

Water for agriculture is a growing problem throughout the world and not just in California.

Turning to the price of gasoline and other fuels there are refinery issues -- not keeping up with demand. In 2020, oil refinery capacity in the United States amounted to approximately 18 million barrels per day. Although refineries are operating at full capacity, they may still have difficulties in meeting daily energy demands
Chile is the world's largest copper producer and while the country may be a welcome home of democracy in Latin America, protests could topple the government and turn to a dictatorship again. Imagine what could happen to copper prices if this key source was disrupted.
Yogi Berra used to say "It's like deja vu all over again." Well, it  is inflation all over again but high prices are not producing more supply and demand is off the charts. Price will be used to ration supply and the path to more supply is broken or now takes even longer to produce results.
It is not the supply chain -- we need more supply not just more truckers to move this stuff to homes and super markets.
How high could prices go?
Below are two Point and Figure charts of the Reuters/Jefferies CRB Index.
In this daily Point and Figure chart of index we can see a price target of 769. 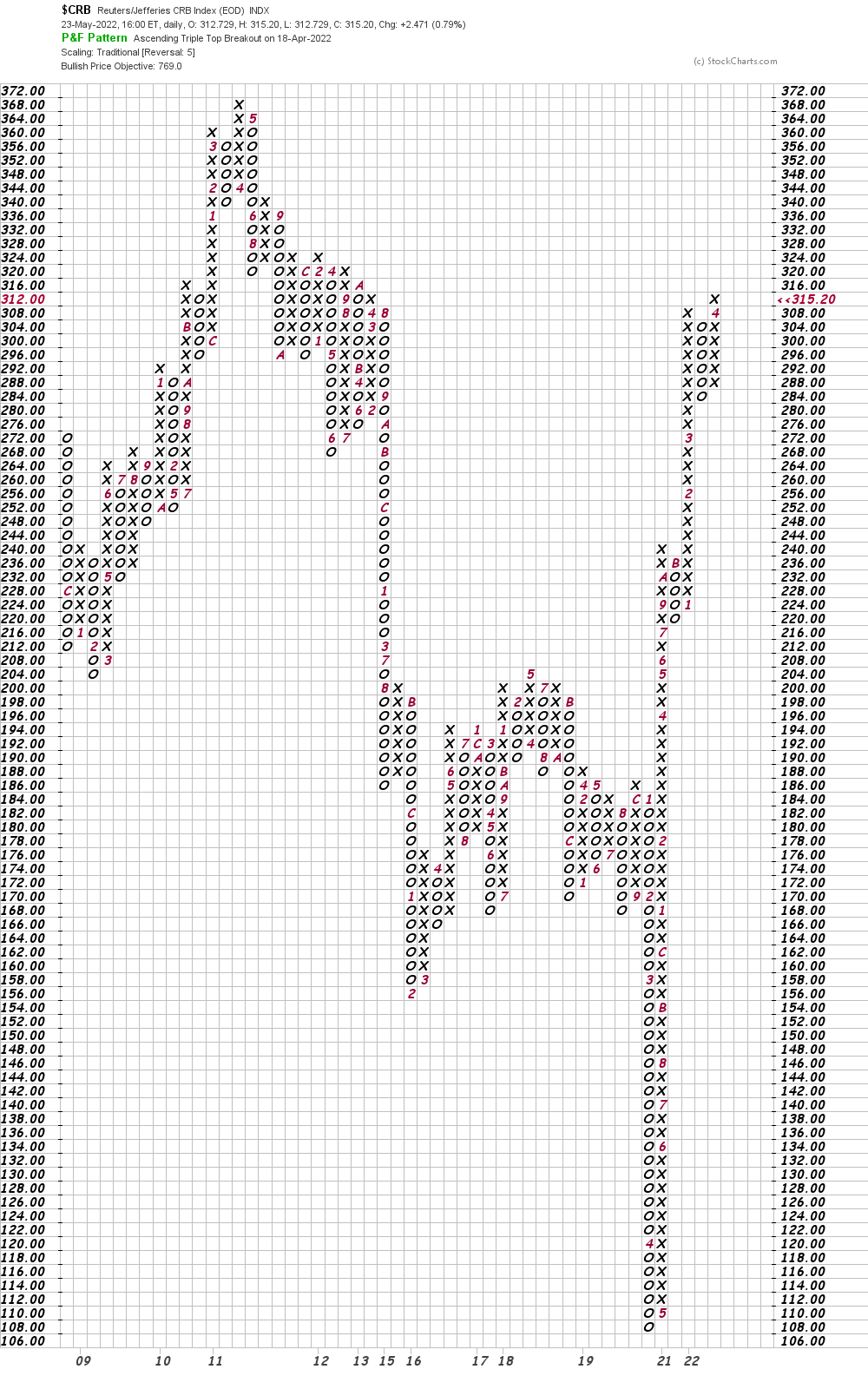 In this weekly Point and Figure chart of the CRB Index a price target of 1,105 is indicated using a five-box reversal filter.

Most money managers have little experience with and no research to support recommending exposure to commodities so I feel there is lots of room for upside before this becomes a crowded trade.
Get an email alert each time I write an article for Real Money. Click the "+Follow" next to my byline to this article.
TAGS: Commodities | Investing | Markets | Technical Analysis | Materials | Metals & Mining | Agriculture

Precious Metals Have Done Precious Little in the Face of Inflation

Gold and silver have been just treading water this year, though that performance certainly is better than most stocks.

If You're Freaked Out About Energy, Then Look Back to 2007

That year we were in a similar situation of skyrocketing energy prices and stories of peak oil. My mom even bought a Prius. Instead of rushing out for a new electric car yourself, try this trade idea.

It Is Becoming a Bit Unnerving Out There

Something is going on behind the scenes, and I am back to very nervous on risk, including bonds and commodities, not just stocks.