Last week's energy market volatility, namely crude oil and natural gas, led to the demise of some large hedge funds and CTAs (Commodity Trading Advisors). A CTA is similar to a hedge fund in that they have authority to trade investor money on their behalf, but the primary difference is a CTA maintains separate accounts for each individual client rather than trading client investments as a pooled fund. Also, a CTA only deals in futures and options on futures (other alternative assets are off limits).

Bullish bets in oil and bearish bets in natural gas by CTAs and hedge funds left many trading accounts in ruins. In at least one situation we are aware of, many of the clients not only lost the funds on deposit but essentially received a bill requesting they deposit more funds into their accounts to cover a negative balance created by the traders in charge of managing the funds. In other words, the CTA lost more money than the clients had given them to trade on their behalf. While I am not certain of the details, putting the bits and pieces together it seems the shortfall owed to the brokerage clearing trades for the CTA and their clients is well into the several million dollar ranges. Many clients owe hundreds of thousands of dollars to pay for losses already sustained on positions that no longer exist to make whole an account that is essentially closed.

We realize that most stock market investors have little knowledge the futures markets exist, let alone actually have trading accounts in them. Nevertheless, when the commodity markets experience mass volatility and liquidity crunches it plays a role in the direction of other financial assets. After all, there are ETFs, levered ETFs, short ETFs, etc., that are commonly traded in equity accounts that have exposure to the commodity markets. Further, there are aggressive stock traders buying and selling crude oil and natural gas company stocks on leverage.

Even those who were not invested in commodity ETFs, commodity-related stocks, or any of the hedge funds or CTAs trading the energies last week, probably felt the ripple effects. In our opinion, much of the recent weakness in the equity markets was at the hands of necessary liquidation of stocks to pay for commodity market margin calls as well as shaken confidence and complacency has been challenged.

We also believe the sudden realization that volatility can come back at any time in both the stock and commodity space helped provide a flight to quality bid in Treasuries. While the commodity margin call selling in stocks has probably mostly run its course, the Treasury bid should linger. Complacency has probably dissipated for the time being.

To put recent energy market volatility into perspective, the implied volatility built into the natural gas options markets tends to hover in the 30 range in the long run. Yet, in recent weeks the implied volatility skyrocketed from 30 to 130, leaving gaps along the way. This means the IV on Monday mornings jumped dramatically from the previous Friday's close; anybody holding short options or short futures likely felt helpless as prices exploded against them.

If you are unfamiliar with option implied volatility, it is essentially the amount of risk premium the options market is pricing into option values to account for expectations in volatility. In other words, it is a bit of a fear gauge, not unlike the VIX, which is based on the implied volatility in S&P 500 options.

When IV moves higher, associated option prices move higher. In this particular instance, the IV in natural gas has become so overpowering that those who sold strangles last week (sell calls and sell puts) are finding that they are losing money on both sides of the trade because the IV has caused both put and call option prices to explode. Throughout my career, I have seen this phenomenon a few times (gold in 2011, oil in 2014, and in the S&P on a few occasions) but it is an exception to the rule.

Crude oil speculators on the wrong side of the fallout are experiencing something similar. Implied volatility has run into the 60s from the 30s. If it weren't for the "off the charts" IV in natural gas, this would be the talk of the commodity markets.

In the aftermath of a significant blowup of speculative plays in energies, we are surprised at the lack of buying interest in what are considered safety assets, such as Treasuries and gold. Additionally, in light of the downturn in stocks, we would expect the Treasury market to be soaring higher. However, we also acknowledge that in recent weeks the proceeds from stock liquidation has likely gone to commodity trading accounts to cover margin calls and, worse, deficit balances.

Both gold and U.S. government bonds are supported by seasonal tendencies, and while the assets are off their recent lows, they are still cheap relative to what we have seen throughout the previous decade and should eventually begin moving higher.

Treasury bears have been bold and vocal, but sentiment should change to catch up with stocks and commodities.

You know the drill, if "everyone" is already bearish and short the market there is a tendency for fresh selling to dry up and prices often reverse sharply as traders unwind their positions. That is precisely what occurred in early October just as the bullish yield (bearish Treasury) tone in the financial media became deafening.

We have since seen speculators quietly offset roughly half of their bearish 10-year note futures contracts (a bullish play on yields). Nevertheless, according to the Consensus Bullish Sentiment Index, less than 30% of industry insiders polled are bullish the 10-year note. As contrarians, we see this as a sign the bears are complacent, and the market is ripe for a significant trend reversal. 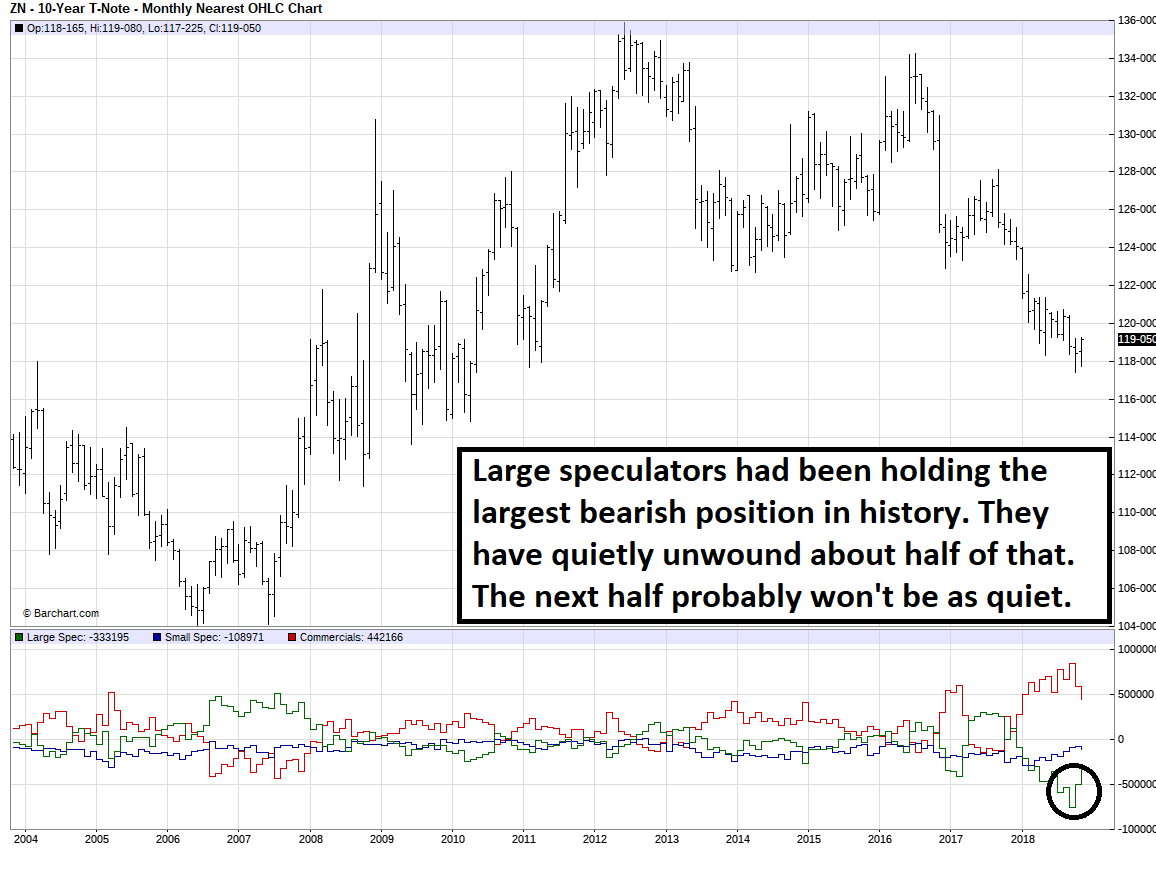 To be honest, we are shocked the unwinding of an overcrowded short trade hasn't had a bigger impact on Treasury prices. Nevertheless, the bleeding has been stopped and, in our opinion, there is a strong chance speculators continue offsetting their bearish positions and begin to build a net long position in the 10-year note futures. After all, the Treasury market benefited very little from the stock market rout as one would normally expect, and recent commodity market turmoil should keep safety interests in the forefront. In other words, U.S. Treasuries could continue their rally as prices catch up with the new environment of volatility in the financial and commodity markets. If so, this could be quite a boost to Treasury prices and a detriment to yields.

The weekly chart of the 10-year note futures contract reveals the market in a relatively low volatility trading channel. However, Treasuries don't stay quiet in the long run. We expect a breakout of the range sooner rather than later. Supportive seasonality and what has been a perpetually overcrowded short trade leads us to believe the move will eventually be to the upside. 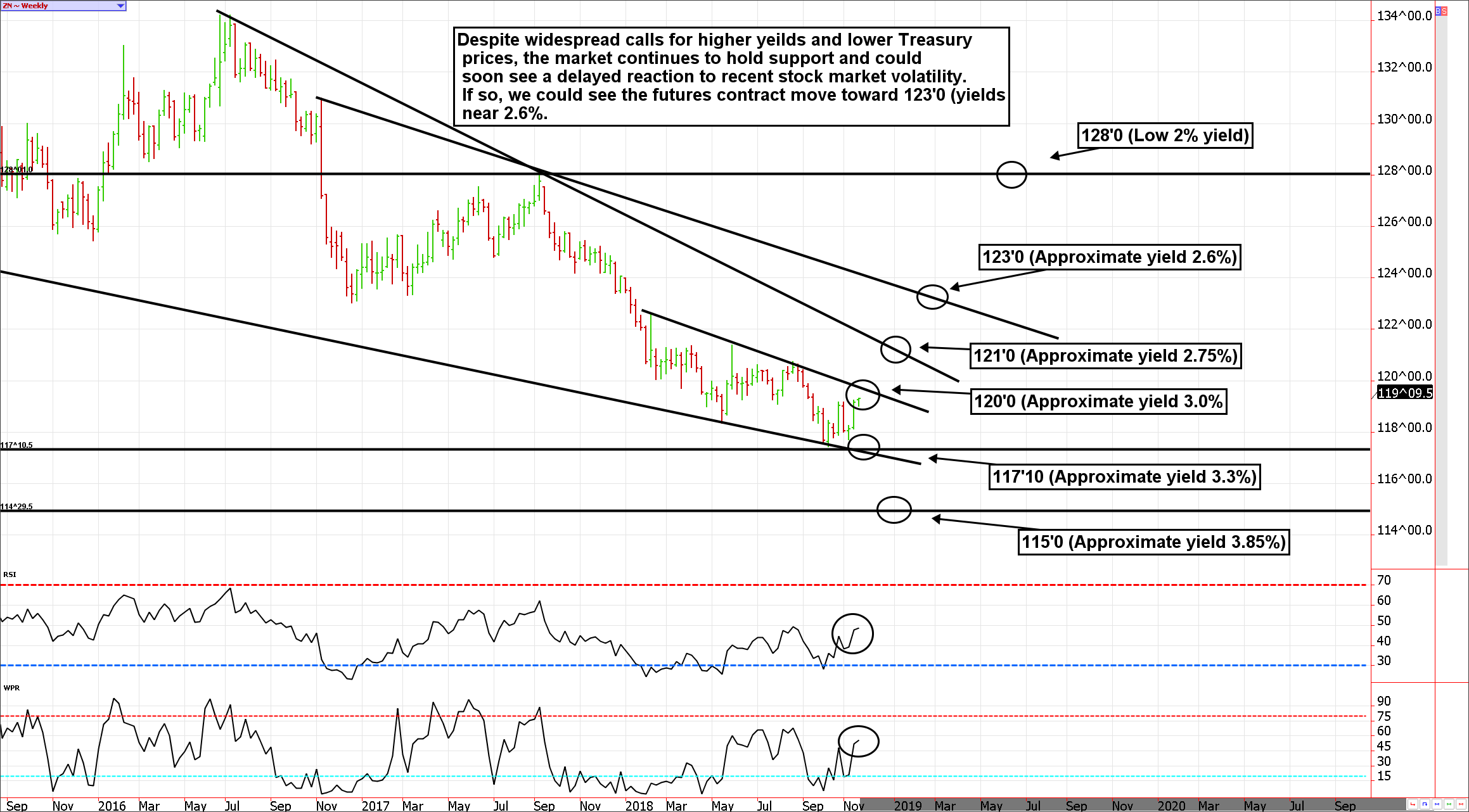 If the stock market falters or there are significant signs of economic weakness, a run toward the low 2% area is possible (this would equate to a 10-year note futures price of about 128'0). If we are wrong about 117'0 support holding, the market could slide sharply toward 115'0, which would see the yield move well into the high 3%s; however, this is not the expected outcome.

This commentary originally appeared on Real Money Pro on Nov. 21. Click here to learn about this dynamic market information service for active traders.

Get an email alert each time I write an article for Real Money. Click the "+Follow" next to my byline to this article.
TAGS: Short-selling | Commodities | Futures | Gold | Markets | Trading | Treasury Bonds

Despite the treacherous nature of the market, most people have an opinion to express on the direction of gas prices.

Natural gas is critical to more than energy speculation, and here's where I see this crucial commodity hitting resistance.