According to Standard & Poor's, the reopening of China's economy will create fresh demand for oil. S&P estimates that China's awakening will generate the equivalent to 3.3 million barrels of crude oil per day.

That's a significant bump in demand. For a reference point, the International Energy Agency estimates that the world consumed 96.2 million barrels per day in 2021.

China continues to loosen pandemic-related restrictions. Earlier this week, several government-mandated tracking apps were deactivated, just as citizens prepare to travel for the holidays. China's New Year celebration is scheduled to begin on January 22, and will last for about two weeks.

January crude has formed an A-B-C-D pattern. This bearish formation suggests a price of $65 per barrel.

This weakness in oil seems to contradict seasonal factors. The following chart demonstrates seasonal price behavior for crude oil over the past 20 years (2001-2021). 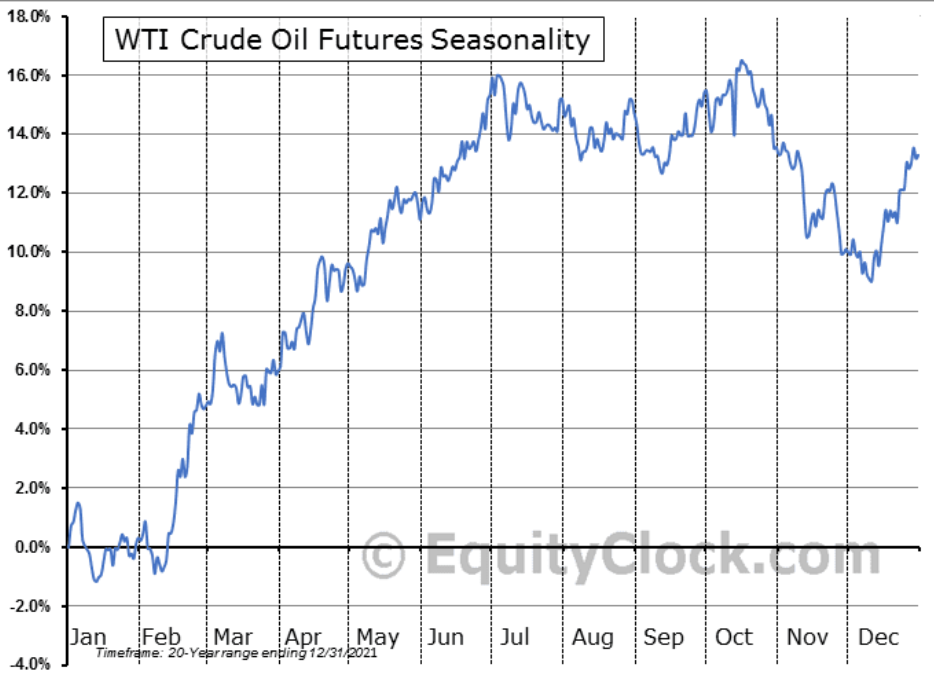 As seen on the chart, oil prices tend to peak in October and decline through mid-December, when they begin to rise. Despite this seasonal advantage, the current oil chart shows no sign of resurgence.

The lack of a positive impact on oil due to China's imminent reopening, and the way oil appears to be ignoring seasonal patterns, reinforces our position that taking profits on energy-related stocks is the correct move.

The benchmark Energy Select SPDR Fund (XLE) is up more than 52% year to date, despite its recent pullback. Energy has been by far the top-performing sector of 2022.

XLE hit a fresh six-week low on Friday, as it pulled back after forming a rounded top pattern (curved black line). The bellwether ETF has closed beneath its 50-day moving average (blue) for five consecutive sessions. The next major support for XLE is the ETF's 200-day moving average (red), currently hovering just below the $80 mark.

China consumes more copper than any other country in the world. If we're about to see an economic resurgence due to China's reopening, we'd likely see that reflected in Dr. Copper's chart.

Despite this, the COMEX January 2023 copper contract was rejected at its 200-day moving average just last week (arrow). Copper has traded below that key indicator for the past six months.

Despite the excitement generated by Tuesday's CPI report, inflation is still high. CPI inflation is now measured at an annual rate of 7.1%.

Add all of these factors together, and it's difficult to see light at the end of the tunnel for the global economy.

Get an email alert each time I write an article for Real Money. Click the "+Follow" next to my byline to this article.
TAGS: Commodities | Economy | ETFs | Indexes | Markets | Oil | Energy | China | U.S. Equity

Here's why investors should refrain from fitting a narrative to copper's price move, and instead focus on getting properly positioned.

Wheaton Precious Metals Could Double Over the Long Term

Buyers of the precious metals company's stock have been more aggressive than sellers for a few months.

Back to the Dark Ages? No, We're Not Running Out of Natural Gas

We're past the middle of the peak of winter and even assuming this cold weather spell, inventories should close the season very comfortably.

Trading Natural Gas Futures Can Feel Like a Real Circus ...

As we check the levels on gas futures for a possible bottom reversal, we find spinning tops and other odd formations that can guide investors.