By STEPHEN GUILFOYLE Nov 22, 2022 | 07:37 AM EST
Stocks quotes in this article: ADI, BBY, BURL, DKS, DLTR, MDT, ADSK, HPQ, VMW, SJM, XLP, XLRE, XLU, DIS, TSLA, COIN, CVX, HAL, APA, RTX, LMT, BA, ZM
The post- "tradable bottom" pattern of higher trading volume on "up" days and lower trading volume on "down" days continued Monday. Is that meaningful? It certainly could be. It does mean that for almost six weeks now, there has been greater professional participation whenever equity markets are in rally mode than when risk is being reduced. That said, I am not sure how much can be read into aggregate trading volumes this week.
There were no macroeconomic releases of any significance made Monday, as outside of J.M. Smucker ( SJM) , there was very little in the way of corporate performance released ahead of the opening bell. The session leaned toward the negative as news of renewed Covid-related lockdowns in China spread prior to the opening bell. The Philadelphia Semiconductor Index (-1.77%) and the Nasdaq Composite (-1.09%) felt the most pressure from an index-wide perspective. The broader S&P 500 and the smaller-cap indexes only showed pedestrian losses.
Seven of the 11 S&P sector-select SPDR ETFs shaded green for Monday, which could have been seen as a positive if not for the fact that all four defensive sectors were part of the seven including the Staples ( XLP) , the REITs ( XLRE) , and Utilities ( XLU) at the very top of the daily performance tables. The fact is that losers beat winners by a narrow 8-to-7 margin at the NYSE and by an odd-looking 14 to 9 at the Nasdaq Composite with advancing volume capturing a 38.7% share of composite trade for names listed at the former and a 28.1% share for names listed at the latter.
That said, as mentioned above, aggregate trade for the session dropped 4.6% and 4.7% day over day from Friday's "up" day for NYSE listings and Nasdaq listings, respectively. For both the S&P 500 and the Nasdaq Composite, in aggregate, Monday was the slowest trading day since August.

Though quiet, Monday certainly did provide for enough individual pockets of activity.
The news that The Walt Disney Company ( DIS) had sacked Bob Chapek as CEO and replaced him with his predecessor, Bob Iger, led all headlines, not to mention the stock higher. Elsewhere, Tesla ( TSLA)  , at -6.79%, led the S&P 500 lower as the news of those Covid lockdowns in China had a disproportionate impact upon the electric vehicle manufacturer. Beyond Tesla, Coinbase ( COIN) dropped 8.9% as Bitcoin threatened to trade below $15,500. As much as the FTX bankruptcy drama has damaged the entire crypto industry, short-seller Jim Chanos was publicly critical of the firm's business model.
The real volatility on Monday was in WTI Crude. WTI and Brent Crude both dropped more than 5% intraday on Monday to the point where front-month WTI was trading with a $75 handle and front-month Brent was trading with an $82 handle after the Wall Street Journal ran a story that suggested that a production increase of 500K barrels per day could be on the table at the December meeting of the OPEC+ coalition that includes the OPEC cartel, led by Saudi Arabia, and allied non-OPEC producers, usually led by Russia.
Readers will recall that just two months ago the OPEC+ group reduced output, at least on paper, by 2M barrels per day. On Monday, the Saudis denied the story in the Journal and Crude prices quickly recovered. I see WTI trading above $80 and Brent trading above $87 very early Tuesday morning. I remain long both Chevron ( CVX) and Halliburton ( HAL) as core Energy positions and often trade APA Corp. ( APA) , the old Apache Oil, as well.

It's not like "they" have gone dovish or anything like that, but two regional Fed district presidents spoke on Monday and both expressed a need to be less reckless moving forward. Early on in the day, San Francisco Fed President Mary Daly told an Irvine, California audience, "As we work to bring policy to a sufficiently restrictive stance -- the level required to bring inflation down and restore price stability -- we will need to be mindful. Adjusting too little will leave inflation too high. Adjusting too much could lead to an unnecessarily painful downturn."
Even Cleveland Fed President Loretta Mester, who is naturally more hawkish than most of her colleagues, seemed to back off just a bit. Later on Monday, Mester told CNBC, "We're at a point where we're going to enter a restrictive stance of policy. At that point, I think it makes sense that we can slow down a bit, the pace of increases. We're still going to raise the Fed Funds Rate, but we're at a reasonable point now where we can be very deliberate in setting monetary policy."
It appears that enough of the Fed is now at least making a show of needing to slow the pace of increases at the short end of the yield curve now that the Fed Funds Rate has gone from 0% to 4% too quickly for the negative impacts of higher rates to possibly be felt by the economy in anything close to real time. It will still be many months before we understand what current policy is doing on Main Street, USA. At least part of the Fed is beginning to show public cognizance of this reality. Cleveland will vote in December and then not again until 2024. San Francisco will not vote until 2024.
Just as a heads up: Mester will speak again this morning, and then later on, we'll hear from both Kansas City's Esther George and James Bullard of St. Louis. George is a natural hawk who has shown recent signs of pragmatism, while Bullard is a natural pragmatist who has led the hawkish caucus of late.

On Day One of Bob Iger's second stint as Disney chief executive, Kareem Daniel, who had been a top aide to former CEO Bob Chapek and also head of Disney Media, Entertainment and Distribution (one of Disney's two reporting business segments), stepped down from that position. Iger made clear his intention to reorganize at least that segment in a memo to employees.
Iger wrote, "Over the coming weeks, we will begin to implement organizational and operating changes within the company. It is my intention to restructure things in a way that honors and respects creativity as the heart and soul of who we are." Iger wraps up commenting, "Without question, elements of DMED will remain, but I fundamentally believe that storytelling is what fuels this company, and it belongs at the center of how we organize our businesses."

Poland began receiving equipment in September that will result in the nation's first two Patriot missile battery systems being fully operational at some point in late 2023. Until then, Germany has offered and Poland has accepted the offer to send Patriot missiles to Poland with fighter jets to be deployed near the Ukrainian border. Germany also intends to deploy Patriot missile batteries to the Slovakian border with Ukraine through at least 2023 as well.
Germany, Poland, and Slovakia are all members of the NATO defensive alliance. The MIM-104 Patriot system is a Raytheon ( RTX) design and can be manufactured by Raytheon, Lockheed Martin ( LMT) , and Boeing ( BA) . The surface-to-air missiles are also a Raytheon design and have been modernized continually by Raytheon since going operational in 1984.

Zoom Video ( ZM) reported on Monday evening. The company posted a third consecutive quarter of negative year-over-year adjusted earnings growth on a seventh consecutive quarter of decelerating year-over-year revenue growth. Zoom also guided toward a current quarter that would fall short of consensus for both total revenue and adjusted EPS. Hence, what you have here is a selloff overnight into Tuesday.
The stock apexed above $588 per share in October 2020. The shares bottomed (so far) at $70.44 in October 2022. As of Monday night, the shares traded at 22 times forward-looking earnings, meaning that these shares are actually closing in on a realistic valuation.
The company is profitable, even unadjusted. Most of that adjustment is for stock-based compensation. The balance sheet is clean. Robust current ratio. No debt. The majority of the liability side of the sheet is deferred revenue. 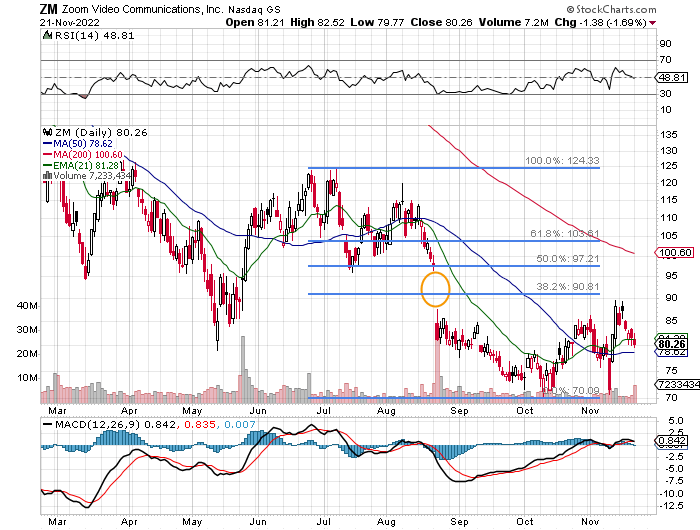 I see the shares trading with a $73 handle early this morning (-9%). This is a good company. The stock was overvalued and that has/is being corrected. I will very likely initiate this name this morning between here and that October low. I would be wary should the stock create a new low at some point today, but you guys know I'm a sucker for profitable companies with strong balance sheets that show no debt.
What's bouncing around in my head is that unfilled gap from August. All ZM needs is a 50% retracement of the June-through-October selloff to fill that hole. Not very far-fetched at all.