Think twice before chasing stocks at these levels. That's what some of the market data is telling us.

Two of the McClellan 1-day OB/OS Oscillators are now overbought, and when joined with some of the stochastic levels, suggest chasing price at current levels may not be the wisest approach for the very short term. 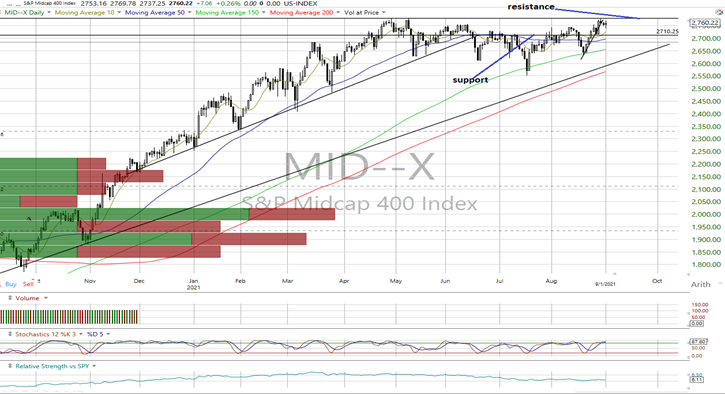 Only the DJIA closed lower Wednesday as the rest of the indexes advanced with positive internals on the NYSE and Nasdaq.

The Nasdaq Composite and Nasdaq 100 made new closing highs, leaving all the indexes in near-term uptrends except the DJIA and MidCap 400 being neutral.

Regarding the MidCap, a closer examination of the chart (see above) has led us to consider the possible formation of a complex inverted head and shoulders for the index. A new closing high above resistance on volume would be required to further validate our assumption. Should that occur, it would imply a potential move to 3,000 for the MidCap, in our opinion.

Market breadth, meanwhile, continued to improve with the All Exchange, NYSE and Nasdaq cumulative advance decline lines positive while the All Exchange joined the NYSE A/D by moving above its 50-day moving average.

Some of the stochastic levels are now overbought and in the mid- 90s. No bearish crossovers have been generated thus far. However, that potential does exist.

The data saw a few shifts.

The McClellan 1-Day Overbought/Oversold Oscillators find the Nasdaq and All Exchange 1-day now overbought with the NYSE's neutral (All Exchange: +54.7 NYSE: +38.65 Nasdaq: +65.9).

The Rydex Ratio (contrarian indicator), measuring the action of the leveraged ETF traders, dipped to 1.32 but still finds the ETF traders heavily leveraged long and in bearish territory.

The Open Insider Buy/Sell Ratio was unchanged at a neutral 38.5.

This week's contrarian AAII bear/bull ratio saw an increase in bears and bulls, remaining neutral (32.77/35.43), with the Investors Intelligence Bear/Bull Ratio at a bearish 18.5/50.0 (contrary indicator) as a few advisors left the bull camp.

The 10-Year Treasury yield was unchanged at 1.3% and remains within its current trading range with resistance at 1.4% and support at 1.23%. We believe the recent shift of the 10-Year yield into a higher trading range could cause some issues for the markets.

While the OB/OS and Rydex Ratio suggest some tempering of very near-term enthusiasm, we remain "neutral/positive" in our near-term macro-outlook for equities.

Get an email alert each time I write an article for Real Money. Click the "+Follow" next to my byline to this article.
TAGS: Indexes | Markets | Small Cap | Stocks | Trading | Treasury Bonds | U.S. Equity