Yet while the charts weakened, the data has moved to a more encouraging stance and, in our opinion, may be setting up for another buying opportunity.

We would also note that Friday's rout had little impact on the 10-Year Treasury yield while forward 12-month earnings estimates for the S&P 500 saw a nice uptick, narrowing the valuation spread that had been of some concern.

We may see tests of the 50-day moving averages on the charts that could be forming the "right shoulder" of inverted head and shoulder patterns that would be quite positive if they prove out. However, it's too early to make decisions in that particular case. 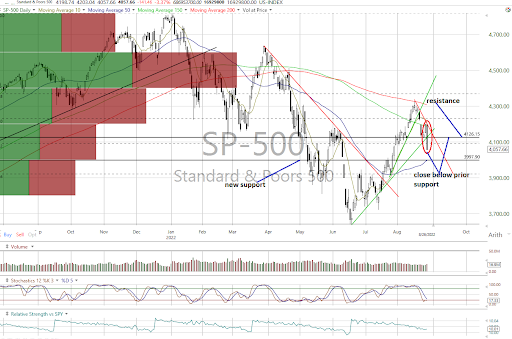 All the major equity indexes closed lower Friday with broadly negative internals on heavier volume with all closing at or near their intraday lows.

The charts weakened on the S&P 500, DJIA, MidCap 400, Dow Jones Transports and Russell 2000 as all closed below support that turned their near-term trends to bearish from neutral. However, the Nasdaq Composite and Nasdaq 100 held support and remain neutral.

We suspect we may now see tests of the 50-day moving averages before weakness abates.

Also, while it is way too early to make the call, there is the possibility the indexes may now be forming the right shoulder of inverted head and shoulder patterns.

Cumulative market breadth remains neutral for the All Exchange, NYSE and Nasdaq and above their 50 DMAs.

Several stochastic levels are oversold but have not generated bullish crossover signals at this point.

The data has become more encouraging.

The percentage of S&P 500 issues trading above their 50-day moving averages (contrarian indicator) dropped to 63%% and is now neutral versus its prior cautionary implication.

The Open Insider Buy/Sell Ratio rose again to 56.3% as insiders did a little buying but remained neutral as well.

The detrended Rydex Ratio (contrarian indicator) slipped to -1.02 and is now mildly bullish as opposed to neutral.

The forward 12-month consensus earnings estimate from Bloomberg for the S&P 500 finally saw an uptick to $232.73 per share. As such, the valuation spread narrowed but is still at a slight premium to ballpark fair value via the "rule of 20" with the S&P's forward P/E multiple down to 17.4x versus 17.0x.

The 10-Year Treasury yield closed slightly higher at 3.04% and little changed given the intensity of Powell's statements. Support remains 2.92% with resistance at 3.16%.

Friday's steep declines hurt the charts, but the data saw some noticeable improvements that may be setting up another buying opportunity, although not currently actionable, in our view.

Get an email alert each time I write an article for Real Money. Click the "+Follow" next to my byline to this article.
TAGS: Federal Reserve | Indexes | Markets | Technical Analysis | Treasury Bonds | U.S. Equity