With Tuesday's selloff, all but one of the major equity indexes violated their near-term support levels, leaving all the index charts in near-term downtrends. The hammer levels we have discussed here held their ground on some of the indexes, but others failed (see below).

While cumulative market breadth suffered as well, the McClellan 1-day OB/OS Oscillators are now in oversold territory, which may offer some degree of stabilization from the three-day slide in equity prices.

The 10-Year Treasury yield that has been the culprit behind the market weakness rose again but is now reaching a level we suspect may prove to be difficult to overcome over the near-term, which may also offer some respite. 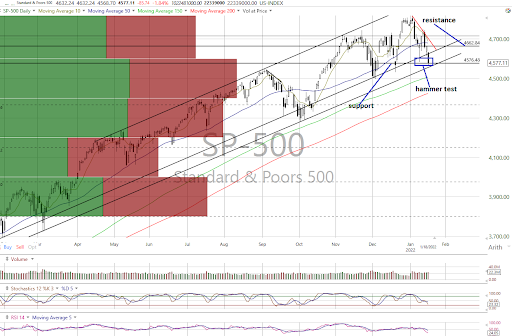 The major equity indexes closed notably lower Tuesday with very negative internals as trading volumes intensified from the prior session.

All closed near their intraday lows with only the S&P 500 (see above) managing to not violate its near-term support level. As a result, all the indexes are now in near-term downtrends.

Regarding the hammer levels we have discussed here recently, they held on the S&P 500, Nasdaq 100 and Value Line Arithmetic indexes, while they failed on the DJIA, Dow Jones Transports, Midcap 400 and Russell 2000.

Cumulative market breadth deteriorated as well with the advance/decline lines for the All Exchange, NYSE and Nasdaq negative.

Offering a slight glimmer of hope, the stochastic levels for the Nasdaq Composite, Nasdaq 100 and Dow Transports are now oversold but have yet to generate bullish crossover signals.

The McClellan 1-Day Overbought/Oversold Oscillators are now oversold and may offer some stabilization from the recent market slide (All Exchange: -59.61 NYSE: -51.95 Nasdaq: -66.44).

The percentage of S&P 500 issues trading above their 50-day moving averages slipped to 50% and remains neutral as the Open Insider Buy/Sell Ratio was unchanged at 45.8, staying neutral as well.

This week's contrarian AAII Bear/Bull Ratio is 0.98, also staying neutral. The Investors Intelligence Bear/Bull Ratio (23.5/50.6) (contrary indicator) remains neutral as the number of bulls and bears dropped from the prior week.

The 10-Year Treasury yield rose to 1.87% and above what we viewed as resistance. We view support for the 10-Year at 1.60% with new resistance at 1.93%. In our opinion, this new resistance may prove to be a barrier to a further rise in yield over the near-term as it is at the level seen on Jan. 7  just prior to the Covid breakout that shook the equity markets and bond prices.

Tuesday's session did plenty of technical damage to the charts and market breadth. However, the current 10-Year Yield and some of the data suggest we may now see some stabilization.