The charts of the major equity indexes saw technical improvements Thursday in the form of violations of resistance and one violation of a downtrend. Market breadth finally saw some improvement as well.

Meanwhile, the data continues to send a generally neutral message. However, the 10-Year Treasury yield closed above what we viewed as near-term resistance, suggesting higher yields forthcoming that could weigh on the equity markets.

So, while Thursday's improvements are welcome, where does that leave us? 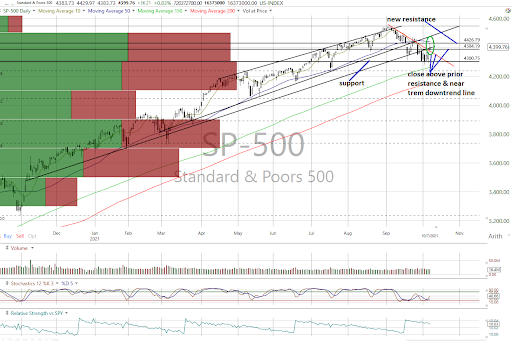 The only index to post a loss Thursday was the Dow Jones Transports. All others posted gains with positive internals on the NYSE and Nasdaq on lighter trading volumes.

Some of the charts saw technical improvements with the S&P 500 (see above), DJIA and MidCap 400 closing above their resistance levels.

Also, the S&P and Russell 2000 closed above their near-term downtrend lines and are now in neutral trends as are all the rest with the exceptions of the Nasdaq Composite and Nasdaq 100, which remain near-term negative despite their gains.

Market breadth saw improvement as well with the cumulative advance/decline lines for the All Exchange, NYSE and Nasdaq turning neutral from negative but staying below their 50-day  moving averages.

The detrended Rydex Ratio (contrarian indicator), measuring the action of the leveraged ETF traders, slipped further to 0.44, one of the lowest levels of the past several months as their bullish expectations have waned from their excesses at the market's highs. As a contrarian indicator, it is an improvement within the psychology data.

The Open Insider Buy/Sell Ratio is still neutral, dipping to 33.6.

The forward 12-month consensus earnings estimate for the S&P 500 from Bloomberg lifted to $213.34 per share. As such, the S&P's forward P/E multiple is 20.6x with the "rule of 20" finding fair value dipping to approximately 18.4x.

Of note, the 10-Year Treasury yield rose to 1.57% and above our 1.55% resistance level. It suggests higher rates forthcoming that could become an issue for equities, in our opinion. We see new resistance now at 1.62% and support at 1.46%.

Thursday's trading helped the charts and market breadth part some of the clouds we saw overhanging the markets. Yet, we still don't believe that they were sufficient to change our near-term "neutral/negative" macro-outlook for equities.

Get an email alert each time I write an article for Real Money. Click the "+Follow" next to my byline to this article.
TAGS: Indexes | Markets | Stocks | Technical Analysis | U.S. Equity