This is a test.

The charts of the major equity indexes are suggest that Thursday's weakness is likely a test of Monday's "hammer" washout of sellers. Such tests are far from unusual.

While four of the indexes closed below their near-term support levels, none of the current near-term trends were altered from their current neutral patterns.

Meanwhile, the data remains generally neutral as insiders did a bit of buying Thursday while the typically wrong leveraged ETF traders remain skeptical of the notable rally earlier in the week. 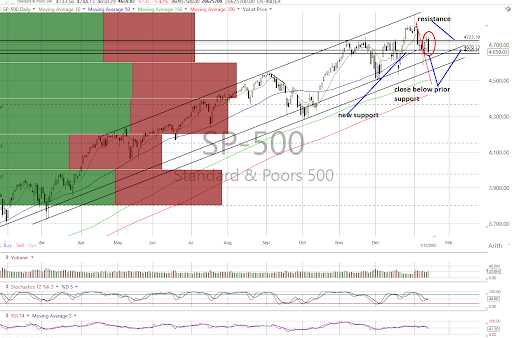 The major equity indexes closed lower Thursday except for the Dow Jones Transports, which posted a gain.

All closed near their intraday lows as the S&P 500 (see above), Nasdaq Composite, Nasdaq 100 and Russell 2000 closed below their near-term support levels.

However, none of the neutral near-term trends were violated that currently exist on each of the indexes. In our opinion, they may be testing the "hammer" levels generated in Monday's action. We noted at that time that these levels had the possibility of being tested. That now appears to be the case.

Cumulative market breadth was unchanged and neutral on the All Exchange, positive on the NYSE and negative on the Nasdaq.

The percentage of S&P 500 issues trading above their 50-day moving averages slipped to 62% and remains neutral as the Open Insider Buy/Sell Ratio rose to 41.4 from 35.6, staying neutral as well.

The detrended Rydex Ratio (contrarian indicator), however, measuring the action of the leveraged ETF traders, was unchanged at 0.77. While staying neutral, the fact that these historically wrong traders continue to disbelieve the market strength earlier this week we find to be encouraging. We get nervous when they become notably leveraged long.

We believe Thursday's weakness may likely be a test of Monday's "hammer" washout of sellers. So, given the state of the charts and data, we remain near-term "positive" in our macro-outlook for equities as we believe that Monday's action likely placed a near-term bottom for the indexes.

Get an email alert each time I write an article for Real Money. Click the "+Follow" next to my byline to this article.
TAGS: Indexes | Markets | Stocks | Trading | Treasury Bonds | U.S. Equity