Although the markets continue to slide, we believe that, in retrospect, this will eventually be viewed as a buying opportunity.

The major equity indexes all closed at or near their intraday lows Wednesday on heavy volume as selling pressure continued, after giving up sizeable gains from early in the session. Indeed, all the index charts are now in near-term downtrends.

However, the data are telling a very different story. Key indicators are at levels seen at market-correction lows over the past two years while insiders continue to increase their buying activity as the crowd rushes for the exit. 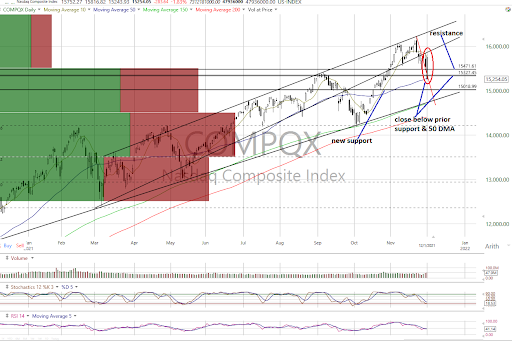 The major equity indexes closed lower Wednesday with very negative internals on the NYSE and Nasdaq as volume remained heavy. All closed at or near their lows of the day after giving up nice gains earlier in the day.

All the indexes closed below support with the Nasdaq Composite (see above) and Nasdaq 100 shifting their near-term trends to negative from neutral. Thus, every index is in a near-term downtrend.

Meanwhile, market breadth continued to deteriorate with the cumulative advance/decline lines for the All Exchange, NYSE and Nasdaq negative and below their 50-day moving averages.

However, in our opinion, the data are sending a notably different message.

The McClellan 1-Day Overbought/Oversold Oscillators moved deeper into oversold territory and are at levels that have been coincident with market-correction lows over the last two years except for the initial outbreak of Covid (All Exchange: -127.8 NYSE: -1313.24 Nasdaq: -125.07).

The percentage of S&P 500 issues trading above their 50-day moving averages, at 29%, is sending the same message as the OB/OS.

The detrended Rydex Ratio (contrarian indicator), measuring the action of the leveraged ETF traders, dropped to 1.07 as they pulled back on their leveraged long exposure. However, it remains cautionary.

In conclusion, we believe the current state of the markets will be viewed in retrospect as a buying opportunity at some point in the not-too-distant future. We remain near-term "neutral/positive" in our macro-outlook for equities.