Once again, we saw early session strength disappear throughout the day Tuesday with all the indexes closing at or near their intraday lows. The charts saw a few technical negative events registered while cumulative market breadth continued to deteriorate.

Meanwhile, the data dashboard has yet to present levels typically associated with correction bottoms.

As such, the charts and data, in our opinion, suggest the potential for some further weakness. 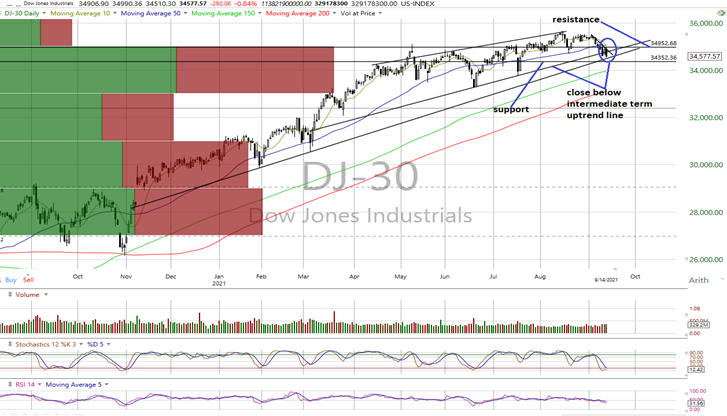 All the major equity indexes closed lower Tuesday with negative internals on lighter volume. All closed at or near their intraday lows as the strong open diminished throughout the session, once again.

Two technical events of note were generated. The DJIA (see above) closed below its intermediate-term uptrend line that had been intact from the beginning of last March. Theoretically, the longer a trend is in place, the greater the significance when it is violated. It is now close to its long-term uptrend line from last November.

Also, the Value Line Arithmetic Index closed back below its 50-day moving average.

We have the near-term trends unchanged, with the S&P 500, Nasdaq Composite, Nasdaq 100 and Dow Jones Transports neutral and the rest negative.

Market breadth weakened further as the NYSE cumulative A/D turned negative and below its 50-day moving average as are the Value Line and Nasdaq A/Ds. Of note, all made lower lows within a weakening structure.

Several stochastic levels are oversold, some in the single digits, but no bullish crossovers have been generated.

The data finds the McClellan 1-Day Overbought/Oversold Oscillators still in neutral territory (All Exchange: -38.82 NYSE: -40.21 Nasdaq: -39.29). They have yet to enter oversold territory.

The Rydex Ratio (contrarian indicator), measuring the action of the leveraged ETF traders, dipped slightly to 1.2 but still finds the ETF traders heavily leveraged long and on a bearish signal.

The Open Insider Buy/Sell Ratio was unchanged at 23.7 and remains bearish. They have yet to see price as attractive enough for purchase.

The 10-Year Treasury yield dipped to 1.28% but remains within its current trading range with resistance at 1.4% and support at 1.23%.

While we remain "neutral" in our near-term outlook for equities, the charts and data suggest the potential for some further erosion. Importantly, we believe "sell signals" on individual names should be honored.