The valuation gap has narrowed on the S&P 500, while broadly negative investor sentiment, a contrarian signal, remains encouraging.

All good for a resumption of the rally? Not so fast...

Friday's trading session ended with all the index charts in near-term neutral patterns while several saw bearish stochastic crossover signals generated. Meanwhile, the data find most of the McClellan OB/OS Oscillators back in overbought territory.

As such, we expect some further consolidation of the recent rally is likely to occur for the near-term. 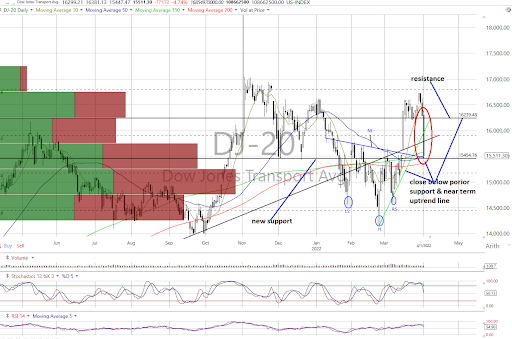 All the major equity indexes but the Dow Jones Transports (-4.74%) (see above) closed higher Friday with generally positive internals as trading volumes declined on both exchanges.

The McClellan 1-Day Overbought/Oversold is back in overbought territory for the All Exchange and NYSE with the Nasdaq's remaining neutral (All Exchange: +53.42 NYSE: +68.05 Nasdaq: +44.38).

The percentage of S&P 500 issues trading above their 50-day moving averages (contrarian indicator) was unchanged at 62% and remains neutral.

The detrended Rydex Ratio (contrarian indicator) rose to +0.48 and is neutral versus its prior bullish implications near the market lows.

The cautionary OB/OS levels and stochastic signals are, in our view, somewhat counterbalanced by the uptick in earnings estimates and continued bearish crowd sentiment. Their combination suggests more near-term consolidation is the higher probability before further progress can be made.