While we may not be completely out of the proverbial woods, the charts of the major equity indexes registered some technical improvements Monday.

Meanwhile, the data remain encouraging, including further improvement in the Open Insider Buy/Sell Ratio and Rydex Ratio dynamic, which has been consistent with action seen near correction lows. 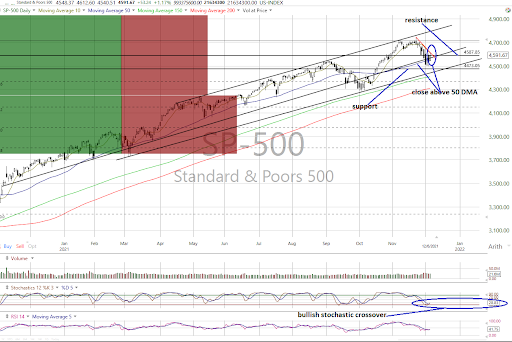 All the major equity indexes closed higher Monday with positive internals on the NYSE and NASDAQ on lighter trading volume.

There were several technical improvements on the charts as follows:

-- The S&P 500 (see above) closed above its 50-day moving average and flashed a bullish stochastic crossover signal.

So, we now find the trends neutral on the DJIA, Dow Transports and MidCap 400 with the rest still negative.

Cumulative market breadth improved slightly on the NYSE as it's A/D turned neutral from negative as the All Exchange and Nasdaq remain negative.

Looking at the data, the McClellan 1-Day Overbought/Oversold Oscillators remain oversold for the All Exchange and Nasdaq with the NYSE's moving into neutral territory (All Exchange: -60.73 NYSE: -45.43 Nasdaq: -70.07). In our opinion, they still suggest potential for further strength near-term.

The percentage of S&P 500 issues trading above their 50-day moving averages increased to 50% and remains neutral.

The Open Insider Buy/Sell Ratio rose to 75.2 as insiders once again opened their wallets to buy their stock.

In contrast, the detrended Rydex Ratio (contrarian indicator), measuring the action of the leveraged ETF traders, sank to a neutral 0.99 as they are no longer leveraged long. It remains neutral.

The OI B/S and Rydex moves are consistent with action seen near correction lows.

The forward 12-month consensus earnings estimate for the S&P 500 from Bloomberg has increase to $215.86 per share. As such, the S&P's forward multiple is 21.3x with the "rule of 20" finding fair value at approximately 18.6x.

The chart improvements combined with the bullish stochastic signals, insider buying and the crowd more nervous suggest we maintain our near-term "neutral/positive" macro-outlook for equites.

Get an email alert each time I write an article for Real Money. Click the "+Follow" next to my byline to this article.
TAGS: Indexes | Markets | Stocks | U.S. Equity