By STEPHEN GUILFOYLE Sep 27, 2022 | 07:44 AM EDT
Stocks quotes in this article: JBL, SNX, CALM, RTX, NOC, LMT, PANW
The Federal Reserve has forced short-term interest rates sharply higher, while reducing the size of their balance sheet/monetary base/money supply from what were dizzying heights. The result has been a 20-year high in U.S. dollar valuations against not only the greenback's reserve currency peers, but against nearly everything.
This has forced Treasury yields sharply higher, even as inversions within the (non) slope of the yield curve are sustained. This, in turn moves foreign investors, attracted by the prospect of positive real interest rates and driven by weakness in their home currencies, into sovereign U.S. debt securities, thus reinforcing outsized demand for U.S. dollars despite the apparent hawkish policies now pursued across many global central banks.
In the meantime, front-month WTI Crude futures have traded with a $76 handle, front-month Natural Gas has even traded below $7, and as the world works its way into an undeniable global recession, Copper futures have traded below $3.30. Equity stakes in corporate entities have been re-rated decisively lower. Despite the potential for safe-haven status, U.S. equities have not been immune. 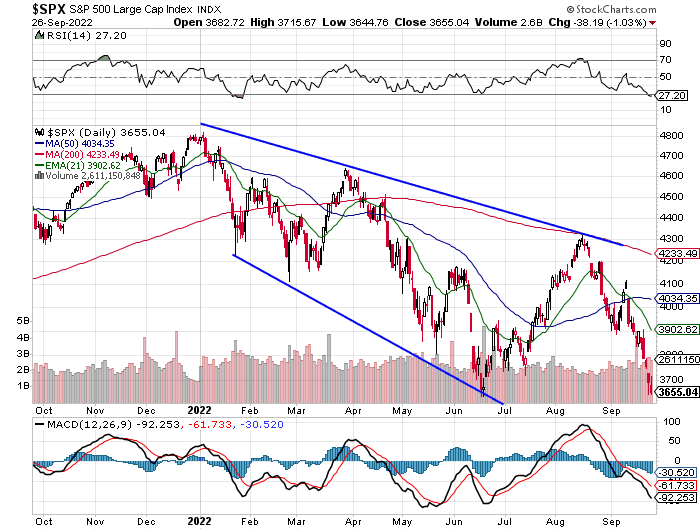 As readers can see above, the S&P 500 has continued to trade within a descending "broadening wedge pattern." A broadening wedge is formed by two diverging trend lines. A descending wedge is seen as bullish, while an ascending wedge would be seen as bearish by those who subscribe to be patterns of reversal.
Confirmation is achieved once we have between two to five touches (closer to five preferred) on both trend lines that then forces an algorithmic response. We also have a dreadfully negative-looking daily Moving Average Convergence Divergence (MACD) and a Relative Strength reading that has finally crossed into undeniably "oversold" territory for the first time since January.
Bet you thought the S&P 500 was already deeply oversold. Not according to its RSI reading -- but it is now. 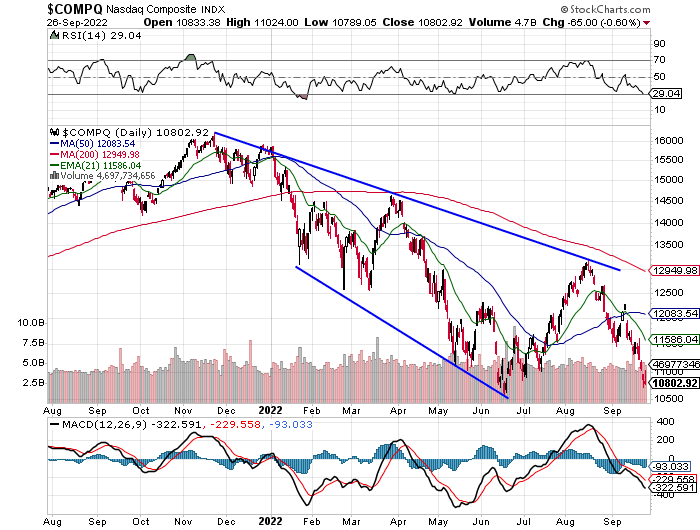 I think that's simple. U.S. equities have had to reprice the cost of credit in order to accommodate a terminal Fed Funds Rate that is 1) going to be higher than originally thought, and 2) going to come later than originally thought. These markets also have to price in the risk of a less-soft U.S. economic landing, also known as a "deep recession" as well as the likelihood of a global recession that impacts most of the planet. All as the FOMC continues to fiddle despite strong evidence that inflation is peaking or has peaked and the fact all of Rome is burning down around them.
When do we actually see some life on the bid side of financial markets? Answering that is easy.
Equity and debt markets will find a bid when currency traders realize that the U.S. dollar is now overbought in aggregate against most of its reserve currency peers and many of those central banks are now also quite hawkish in posture, even if partly in self-defense. This will also allow Treasury yields to come off of their recent peaks.

Readers may have noticed that the yield for the U.S. 10-Year Note popped for 20 basis points on Monday, taking what 10-Year paper pays up to 3.89%. The U.S. 2-Year Note went out paying 4.31%, up 10 basis points for the session. (Both products are yielding about 5 bps less early on Tuesday morning). While this served to elongate the whole curve, it also moved the U.S. 10-Year/2-Year yield spread in the right direction.

This took that particular yield spread off of what looks like a double bottom and now approaches the less severely inverted territory that we had thought was awful a week ago. 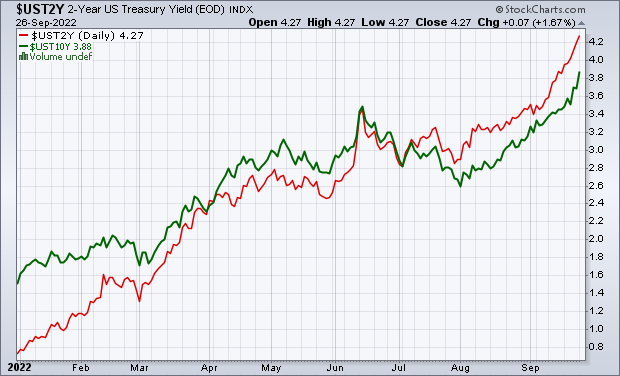 As readers can see above, this spread inverted for good back in early July once it became undeniable that the U.S. economy was in a state of sustained contraction. There was one attempt at closing the inversion in early September that failed. This could be the start of a second attempt.

In support of a yield curve that may or may not be attempting to become less inverted (which would be a step in the right direction economically), the U.S. 10-Year/3-Month yield spread surged on Monday to a positive 49 basis points. This is the healthiest that this spread has looked since mid-July.

How about gold? What about it?
Gold is seen by many as an inflation hedge. Hasn't worked so well has it, Sarge? I'm not so sure. When did core CPI peak? March. When did core PCE peak? February. Check this out: 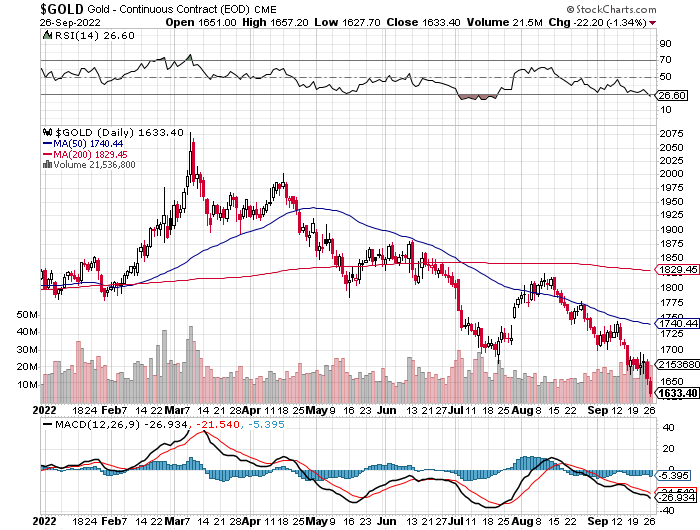 Gold futures peaked back in early March and have been continuously falling ever since. If gold is an inflation hedge, not only did it peak precisely when it should have, gold is also implying that not only is inflation well past its peak, but disinflation or even deflation is probably the greater risk from here than is inflation.
This information is public. The Fed can see this. If they do their homework. Big "if."

The Fed has been and will be out and about. Where the clown car stops nobody knows, but when it does, they'll come pouring out in great numbers to address the public and display a general lack of cognizance in interpreting the relationship between policy implementation and economic performance.
On Monday, newly installed Boston Fed President Susan Collins said:  "Accomplishing price stability will require slower employment growth and a somewhat higher unemployment rate." Where I come from, we call that unemployment growth, not employment growth and we call this "group think" or "group stink." Collins added,  "Returning inflation to target will require further tightening of monetary policy."
Speaking late Monday, our old friend Cleveland Fed President Loretta Mester, who I really do like and have long admired as an economist, said,  "High inflation is proving to be more persistent, and more restrictive policy will be needed and for longer to ensure that inflation expectations do not move up and that inflation moves back down." Mester added,  "There will be some pain and bumps along the way as the growth in output and employment slow and the unemployment rate moves up." There we go again. More stink.
The real downside catalyst for Monday price discovery came from Atlanta Fed President Raphael Bostic, who as fortune would have it, spoke as markets in the U.K. were still digesting the tax-cutting package released by Chancellor of the Exchequer Kwasi Kwarteng that had the British pound doing the fandango. Bostic was asked if Kwarteng's plan would increase the likelihood of global recession. Bostic replied: " It doesn't help."
Bostic went on... "A basic tenet of economics is more uncertainty leads to less engagement by consumers and businesses. The key question will be, what does this mean for ultimately weakening the European economy, which is an important consideration for how the U.S. economy is going to perform."
There are at least four Fed speakers on Tuesday's docket, including the cheese himself, Fed Chair Jerome Powell before the bell, and uber-hawk James Bullard of the St. Louis Fed who may be misguided at times (like he is right now), but at least we know he's thinking as he is usually out of the box first and then followed by all of the copy-cats.

I reinitiated a long position in Raytheon Technologies ( RTX) last week in response to the $985M contract award from the US Air Force to design, develop and produce new hypersonic attack cruise missiles. Later last week, Raytheon's Pratt & Whitney division also landed a $770M contract from the U.S. Navy to procure spare parts, modules, other equipment and transportation material in support of the F-135 propulsion system. The F-135 powers a number of U.S. fighter aircraft including the F-22 Raptor and some models of the F-35 Lightning. I have added to RTX on weakness since.
I have also added to long positions in Northrop Grumman ( NOC) as I would like to bring that name up to the same level of exposure that I have regarding Lockheed Martin ( LMT) .
Away from the world of defense contractors, I have been adding to my Palo Alto Networks ( PANW) long position post-split on weakness. Overall I remain majority cash.