By STEPHEN GUILFOYLE Mar 24, 2022 | 07:38 AM EDT
Stocks quotes in this article: DRI, FDS, AAPL
Were stocks simply overbought? Were Treasury securities simply oversold? Does this explanation sufficiently cover the broad price discovery experienced on Wednesday or this week?
After a fairly sharp equity market selloff that followed a fairly sharp equity market rally on Tuesday, that followed a flat-to-down day on Monday? All on ever-dwindling trading volume?
One has to wonder if professional managers are just being cautious ahead of Thursday's (today's) bevy of high-profile meetings in Europe that will include President Joe Biden, and then Biden's visit to Poland on Friday.
The evidence is clear. Aggregate trading volume across S&P 500 constituent names fell 17% short of the trading volume 50-day simple moving average (SMA) for that index on Wednesday. In fact, this metric has not met or exceeded its 50-day SMA on any single trading day this week.
Aggregate trading volume for Nasdaq Composite constituent names also fell short of the trading volume 50-day SMA for that index on Wednesday as composite volume ended the day lower on a day-to-day basis for both NYSE-listed and Nasdaq-listed securities.

Early on Thursday morning, ahead of the NATO, G-7, and EU meetings in Europe, Ukrainian President Volodymyr Zelensky made his plea in Ukrainian, in Russian, and in English: "Freedom must be armed. The Ukrainian sky has not been made safe from Russian missiles and bombs. We have not received aircraft and modern anti-missile weapons. We have not received tanks, anti-ship equipment."
Zelensky was not done. He went on to call out those slow to respond. Zelensky, referring to the NATO summit in particular, as that is the pertinent military alliance, said results would show "Who is a friend, who is a partner, and who betrayed us for money." That last line perhaps (opinion) was meant to single out Germany. Chancellor Olaf Scholz has been firm that Germany is not willing, or could not participate in an immediate embargo of Russian energy commodities for economic reasons.

The Biden administration has made a formal determination that the Russian armed forces have committed war crimes in Ukraine, as there are multiple examples of Russian forces delivering "indiscriminate attacks deliberately targeting civilians." Secretary of State Antony Blinken noted the now infamous attack on the theater in Mariupol that was clearly marked with the word "children" in the Russian language, as well as the just-as-infamous attack on the maternity hospital as examples. It could be key (probably is) that this determination was made ahead of this day of meetings.

NATO leadership is expected at this summit...

To create four new "battlegroups" numbering between 1K and 1,500 troops apiece. The new units would be stationed in Hungary, Slovakia, Romania, and Bulgaria, and would be in addition to the 40,000 troops currently under NATO command. That 40K is a roughly ten-fold increase in troop strength since Russia invaded Ukraine in February. NATO also has 140 warships and 130 military aircraft on heightened alert.
To agree to provide to Ukraine additional aid, which is likely to include equipment meant to defend against nuclear, biological, or chemical threats. The alliance will also offer assistance in combating Russian threats to Ukrainian cyber security. On Wednesday, NATO Secretary General Jens Stoltenberg said: "We are concerned about the use of chemical or biological weapons. Any use of chemical weapons would totally change the nature of the conflict.. and have far reaching consequences."
To call on Beijing to assist in bringing about an end to this war. China has been accused of providing Moscow with moral if not material support. Stoltenberg said "Beijing has joined Moscow in questioning the right of independent nations to choose their own path. China has provided Russia with political support, including by spreading blatant lies and disinformation, and allies are concerned that China could provide material support for the Russian invasion." U.S. national security adviser Jake Sullivan, speaking from Air Force One on Wednesday, added, We've sent a clear message to China about the implications and consequences of any... provisions of military equipment."

As all of this was happening, markets showed, as we have mentioned, some caution, or some haven-seeking behavior.
Investors bought the whole spectrum of Treasury securities on Wednesday, suppressing the entire yield curve. Suppressed or not and as equity index futures have rallied this morning, yields have again started to move higher. The yield for U.S. 10-Year has remained inverted all the way through the 5-Year, with an inversion versus the 3-Year almost flickering on and off.
Along those lines, there was a tremendous appetite for the $16B worth of 20-Year Bonds that the Treasury auctioned off as well. Bid to cover for the issuance hit the tape at 2.72, while the high yield awarded printed at 2.651%, which was through the "when issued" at the time. Indirect Bidders (foreign accounts, mostly central banks) took down 64.3% of the issue, up from 62.9% in February, while Direct Bidders accounted for a 26% allocation, up from 21% a month ago. This left Primary Dealers with just 9.6% of that entire ball of wax, down from the 16.1% that they were stuck with in February.
Turning to equities, the S&P 500 gave up 1.23% for the session, finally surrendering its 200-day SMA (4474) late in the session. That's a negative.

The Nasdaq Composite, despite its 1.32% decline, has to this point, successfully taken and held its 50-day SMA. That's a positive.

While holding that level is a positive, I don't like the look of that "shooting star" Wednesday candlestick. A shooting star is really just an inverted hammer, with the exception that a shooting star coming after a series of "up" candles can be seen as bearish, and an inverted hammer coming after a series of "down" candles can be seen as bullish. They both tend to signal a change in trend. In this case, that could be a negative for net long portfolios with a focus on Nasdaq-listed large-caps.
No promises. Why, because I am a wimp? Sure. Well, that and Thursday almost surely promises to be a headline driven trading session, and as mentioned earlier, Wednesday's regular session trading behavior could have been more a product of caution ahead of a momentous two-day end-of-week series of events as much as it could have been a bearish change in sentiment.

Not only has Russian President Vladimir Putin demanded that unfriendly European customers pay for Russian energy commodities in rubles (which are worth an approximate U.S. penny), but oil exports from a pipeline connecting the Kazakh oil fields to the Russian Black Sea port of Novorossiysk were brought to a full stop on Wednesday, spiking oil prices, and by extension, unleaded gasoline futures prices.
The relationship between China and Russia was not the only item spoken about by U.S. national security adviser Jake Sullivan from Air Force One. Sullivan said, "A major priority for both the president and his European allies is to reduce the dependence of Europe on Russian gas, full stop and the practical road map for how to do that.. what steps have to be taken, what the United States can contribute, what Europe has to do itself." Sullivan added, "This has been the subject of intense back and forth over the course of the past few days and weeks and we will have more to say on this subject, specifically on Friday."

Apple of My Eye

Readers may have noticed that while all of the major large-cap indices surrendered more than one percentage point on Wednesday that Apple ( AAPL) , the U.S. market's most widely held name, gained 0.8%. 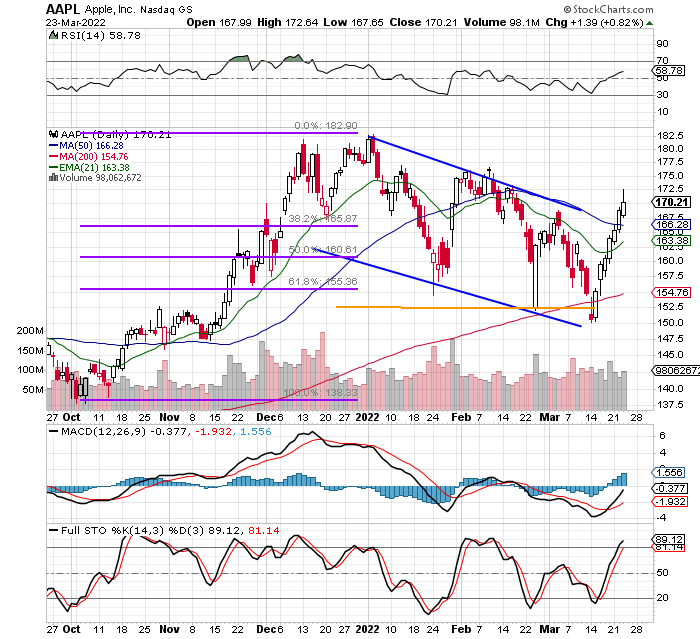 In fact, AAPL has put together seven consecutive "up" days, broken out of a downward-sloping trend and retaken in succession its 200-day SMA, 21-day exponential moving average (EMA) and its 50-day SMA during this stretch.
The big shots were out in force this week in support of the name. First, J.P. Morgan's Samik Chatterjee (5 stars at TipRanks) wrote that Apple is experiencing "robust" demand for the iPhone 13 despite the highly touted launch of Samsung's Galaxy S22. Chatterjee sees U.S. sales trending higher than prior iPhone cycles across multiple carriers. Chatterjee is "overweight" on Apple with a $210 target price.
Then it was Dan Ives (5 stars) of Wedbush who stepped to the plate. Ives wrote that Apple is "seeing" stellar iPhone 13 demand globally. Ives said, "We believe the company is setting up for a monster growth cycle over the next 12 to 18 months that is not baked into shares at current levels. Ives has an "outperform" on AAPL with a target price of $200.
I am long the name, as readers probably know. My price target has been $205, and that has not changed.
Note To Readers: Market Recon will not be published this Friday as I am taking the day off. See you on Monday.

Before the Open: ( DRI) (2.11), ( FDS) (2.96)
(Apple is a holding in the Action Alerts PLUS member club . Want to be alerted before AAP buys or sells AAPL? Learn more now. )
Get an email alert each time I write an article for Real Money. Click the "+Follow" next to my byline to this article.
TAGS: Futures | Indexes | Markets | Oil | Stocks | Trading | Treasury Bonds | U.S. Equity