On Monday morning I explained that the market wasn't terribly oversold. Using my own Oscillator the math behind it just didn't add up to more than another one- or two-day rally.

It's still not set up for a big oversold reading as you can see on the chart, below, sitting closer to the middle of the page than the bottom of it.

I also showed you the Nasdaq Momentum Indicator. For this indicator I plug in lower closing prices for the Nasdaq each day in an attempt to see when the indicator stops going down and instead turns upward even as prices go down since that is the definition of oversold.

The red arrow on the chart, below, shows you what I noted happened this week when I plugged in lower prices because it kept going down. Thus: not oversold. 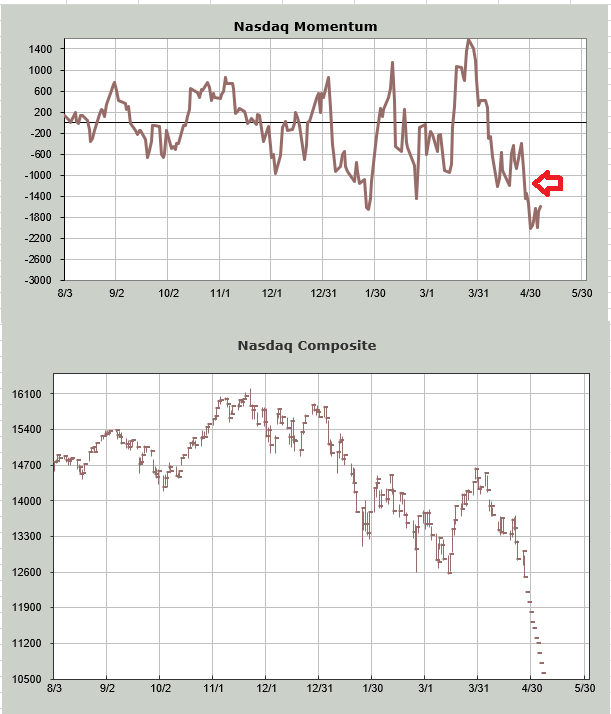 However, I can now report to you that by the end of this week/early next week the indicator stops going down. It doesn't exactly spurt upward, but it does stop going down. That is a change. It is also a sign of short-term "oversoldness."

I can also report to you that the Daily Sentiment Indicator (DSI) for Nasdaq is at 12. If the Nasdaq can manage to be down again on Wednesday, it is possible that the DSI gets to single digits as the Momentum Indicator gets to an oversold condition, something we haven't seen in quite some time.

The DSI for the S&P 500 is at 17 so that would take some more downside work to get it to single digits.

Speaking of single-digit DSI readings, remember the bonds? Remember interest rates? What has happened to the hysteria over higher rates? That single-digit reading for bonds two weeks ago managed, with such little fanfare, to get rates to fall some.

If we use iShares 20+ Year Treasury Bond ETF (TLT) we can see there was that close under $120 and now, very quietly TLT is at $122. There is a lot of resistance at $125, from that downtrend line and those prior highs before that final plunge to under $120, which I expect will be resistance, should it get there. But let's recall that an oversold market (bonds) coupled with a single-digit DSI (bonds) usually provides a lift -- even if it is done with very little fanfare.

I will finish up with a word on capitulation, something everyone seems to be waiting for. Maybe we get it, maybe we don't. From where I sit this market seems to be more about short-term oversold readings that lead to short-term rallies -- in April those rallies have been one-day affairs -- but capitulation? Did we have capitulation in the bonds? Not really.

It's hard to get capitulation when the market rotates from one group to the next rather than be all-encompassing. What I would like to see is the VIX get jumpy. And right now it can't even get up to where it was in March.

Get an email alert each time I write an article for Real Money. Click the "+Follow" next to my byline to this article.
TAGS: Bonds | Indexes | Interest Rates | Investing | Markets | Rates and Bonds | Stocks | Technical Analysis | Treasury Bonds | VIX |